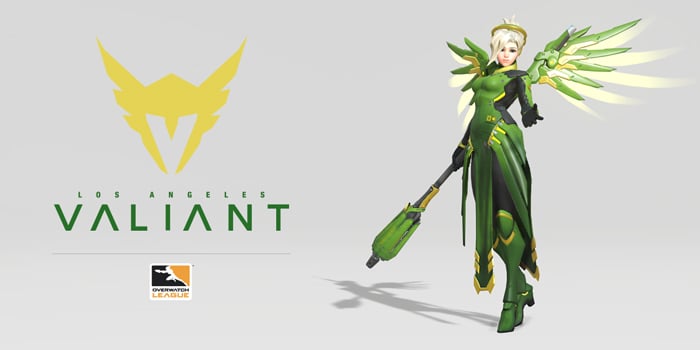 Another Overwatch League team gets their name: the Los Angeles Valiant.

The Immortals Overwatch roster will now be known as the LA Valiant, Immortals CEO Noah Whinston announced on Oct. 23. The name and logo are both connections to the core Immortals brand—the gold-winged helmet is a nod to the old logo while representing the organization’s core values.

Related: NRG’s Overwatch League team will be known as the San Francisco Shock

“The opportunity to build a new sporting brand in the entertainment capital of the world is one we do not take lightly, and we thought long and hard about brand elements that would connect our Overwatch League franchise to the core values of Immortals, and to this iconic city,” Whinston said in a statement. “At the same time, we wanted a brand that was strong and distinctive enough to stand on its own and prioritized a brand, colors, and logo that emphasized the commitment to competitive excellence and championships that Los Angeles expects from its teams. We’ve achieved that with ‘Valiant.’ Signifying heroism and demonstrating courage, bravery, and determination—that’s who we are and who we will always strive to be.”

Colors for LA Valiant aren’t shared with the Immortals brand. Instead, teal is now a true green, with touches of yellow and black. In the announcement, it’s Mercy that wears the LA Valiant–branded skin.

LA Valiant join San Francisco Shock, Dallas Fuel, and Shanghai Dragons as part of the four teams already named and branded. Plenty of name ideas have been potentially leaked—like Seoul Dynasty—but are expected to be confirmed in the months leading up to the Overwatch League start date.