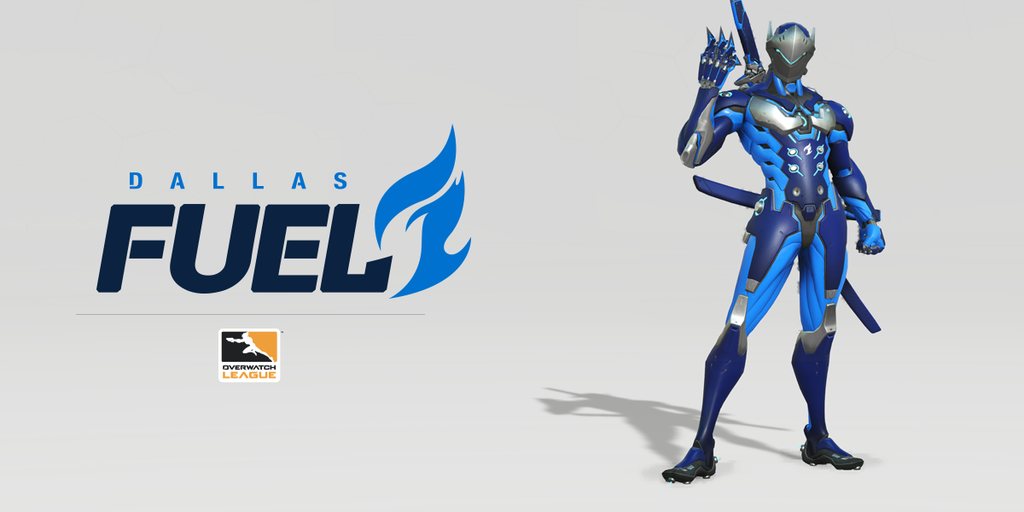 “We’re thrilled to bring a championship-caliber franchise to the area with the Dallas Fuel,” said Team Envy CEO Mike Rufail. “In choosing a name, we wanted to speak to our Texas roots, connect with the legacy of our partners Ken Hersh and the Hersh Interactive Group, and provide a rallying cry for local fans as esports continues to grow. Fuel accomplishes that, and the Dallas Fuel is a team we’re proud to permanently plant in Texas.”

Get it? Hersh is an oil magnate.

Dallas Fuel retains Envy’s blue palette as a way to connect back to the original brand. They are known as the Boys in Blue, after all. The announcement also features an image of Overwatch hero Genji wearing a Dallas Fuel skin—branded with the new logo and colors. As with the Shanghai Dragons’ Mei skin, there has been no official confirmation of these coming in-game, however.

“The logo and identity of the Dallas Fuel franchise recognize the heritage and strength of the energy sector in Texas and the business history of Ken Hersh,” said Randy Chappel, managing director at Hersh Interactive Group. “A powerful spark of energy is what Hersh Interactive Group and the Dallas Fuel intend to bring to the esports industry. We are excited to be the home team for Dallas.”

Overwatch League is scheduled to begin on Dec. 6 with a series of preseason exhibition matches. The regular season will follow come Jan. 10, running through June. Playoffs and finals begin in July 2018. Blizzard and its Overwatch League partners will continue to release branding information for the rest of the 10 teams ahead of the start date.