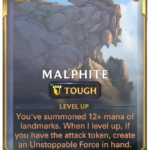 Legends of Runeterra’s latest expansion, Guardians of the Ancient, released last week. As the second out of three sets within the Empires of the Ascended, the expansion features less cards—42 in total—compared to the initial set of three. With a new ranked season and seasonal tournament occurring two months from now, competitors will try to be quick to understand the next strongest card that will take over the meta.

As the most expensive champion to make the list, Malphite has a lot of work to do to make a dent on the meta. But with the Eye of the Ra-Horak, the ability to summon 10 mana worth of Landmarks for the price of five is helpful.

Malphite aims to give Targon an alternative late-game finisher outside of Aurelion Sol, and since he comes down three turns sooner, he needs less support around him to bring him to the board sooner. Outside of the Shard of the Monolith, the Eye of the Ra-Horak can be useful to many different decks, from Taliyah, to Leona, to Yasuo. 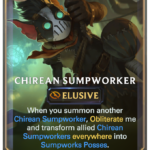 This new Piltover and Zaun follower gives a new deckbuilding challenge for players to work with. Since you need to play multiple copies, you’ll need to find many duplication abilities, like Fading Memories and Stalking Shadows, and play the Chirean Sumpworkers to get the upgraded form quickly. Once they turn into the Posse, a two-mana 4/2 Elusive unit with a powerful burn ability is immense power for its cost.

Generally speaking, you shouldn’t play Chirean Sumpworker on turn two. You need to aim to get the Sumpworks Posse online with two actions back to back.

While SpellShields on champions is not a new concept to LoR, Soothsayer adds protection to Landmarks which is entirely new to the game in addition to having a 1/4 body that is defensive by nature and allows you to survive against aggressive strategies. In a slower meta, Soothsayer will be appreciated by decks that rely on both Landmarks and champions.

Since the Soothsayer provides AoE protection, you won’t need to choose which valuable cards you wish to protect, which goes a long way in Shurima’s newest follower finding success. 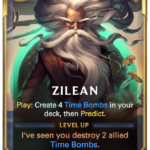 Zilean is the most imaginative champion with the most deckbuilding potential on this list. Since he has duplication effects, Zilean has a chance to revive Go Hard strategies in Shadow Isles. Aside from his leveled-up form, Zilean’s Predict and Time Bomb-generating abilities can assist decks that need more consistency in their draws, like Swain from Noxus.

One major weakness for Zilean to consider is that it takes a considerable amount of time to level up due to the mana that needs to be spent to develop Time Bombs.

Aside from Eye of the Ra-Horak, Solari Sunhawk provides Daybreak further stun support, but on a two-mana 2/3 unit. As a potential replacement to Shieldbearer, Solari Sunhawk’s ability is potent in aggressive and midrange decks.

Aside from securing obvious spots in Leona lists, Solari Sunhawk can carve out a new shell in Lucian decks, Yasuo builds, and even some control strategies looking to stall for late game while building on the board. 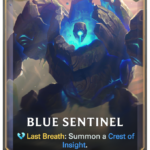 As another two-mana 2/3 unit to make the list, League of Legends’ Blue Buff adds to Targon’s effectiveness in a potent way thanks to its Last Breath ability. If it dies, gaining a temporary mana crystal on the following round can allow you to cheat out powerful cards turns earlier than expected. This effect can snowball a game in your favor.

While Syncopation’s effect is not new to LoR, it is the cheapest available swap effect on a collectible card. At two mana, you can reduce the effectiveness of your opponent’s targeted spells by sacrificing a weaker unit on your side of the board. Aside from disrupting opposing strategies, you can also use Syncopation to have your weaker units serve as a conduit for your stronger cards to reach the opponent’s Nexus directly if your opponent tries to block them.

Despite the versatility that Syncopation brings, a major weakness to consider with this new burst spell is that on its own it doesn’t provide card advantage, so using it wisely will prevent you from falling behind your opponent.

One of Shurima’s newest aggressive followers gives the region’s three-mana slot a premium unit that can serve multiple roles. As a 4/3 with Fearsome, she can help aggro decks bypass early boards and deal high damage at early stages within the game. Thanks to her play ability, she can either hunt down highly valuable units in combat with the Vulnerable debuff, or serve as an activator for Renekton.

While she’s a simple-looking card on the surface, sometimes basic cards are the ones that are most effective.

The least expensive card on this list brings back an old strategy that revolves around using Elusive units. Even if you ignore Dancing Droplet’s effect text, the fact that it provides Attune makes it effectively free due to the spell mana rebate it provides.

When you factor in its recall ability, allowing you to retain card advantage whenever you send the Droplet back to your hand allows you to cycle through your deck faster. 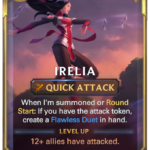 As the cheapest champion and one with the most varied strategies on this list, Irelia aims to up the tempo of any given game due to her aggressive nature. Thanks to the entire Blade Dance package that Ionia has provided during the Guardians of the Ancient expansion, decks that rely on attacking synergies have been granted a new edge.

Primarily successful with Azir and Miss Fortune, Irelia allows you to attack multiple times within any given round, including turns where your opponent has the attack token.

In addition to all of this, Irelia’s threat level amplifies to immeasurable heights due to her Bladesurge. Whenever you declare an attack, your opponent needs to spend a ton of resources and time on which blocks to choose due to the ability to swap in a powerful unit on a moment’s notice.

One downside to Irelia is similar to Zed, where she’s more prone to removal due to her two health, and investing three mana to play her gives the opponent to counter her before she can snowball a game in your favor. But since Irelia is found in Ionia, this weakness can be circumvented thanks to the region’s potent counters through cards like Nopeify.

She’s also especially weak to Dragons and Nasus. The main reason for this is due to the fact that Blade Dance spawns multiple 1/1 tokens to slay for either deck, which allows those types of lists to exploit the unit spam.

Try these cards for yourself and collect them now in LoR: Guardians of the Ancient, which is officially out now on PC and mobile.