The reveal season for Legends of Runeterra’s upcoming expansion, Guardians of the Ancient, is nearing its end. 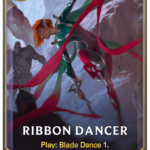 Blade Dance is a mechanic that has you start an attack that doesn’t expend or require an attack token with the number of Blades listed on the card. As a reminder from the start of the reveal season, Blades are 1/1 units that Obliterate themselves when they leave combat.

Ribbon Dancer is a Rare two-mana 2/1 unit that has a Play ability that Blade Dances for one. Syncopation is a Rare Burst speed spell that swaps the position of two allies.

Zinnia is an Epic eight-mana 3/5 Elusive unit that has a unique ability that lets her join in for the attack whenever you Blade Dance. In addition, she has a Play ability that Blade Dances for one, allowing her to immediately use that initial effect.

Now that it’s clear how Blades are properly summoned and used, it’s much easier to judge cards with the new Blade Dance keyword. While cards with Blade Dance have terrible stats for their cost, like Ribbon Dancer and Blossoming Blade, this weakness is circumvented when they’re combined with abilities or combos that rely on seeing multiple attacks.

For example, Azir’s most efficient and popular non-Ascended deck is a list that’s combined with Lucian and Demacia thanks to the ability to provide extra attacks due to its Rallys, Scouts, and Cataclysm. Since Blade Dance can bring extra attacks, there’s a fair chance that the upcoming Irelia and her fellow Blade Dancers will enjoy working with Azir and his Emperor’s Dais.

In addition, any unit or ability with the keyword can become aggressive and pair up with Bilgewater and Miss Fortune. Blade Dance can give Miss Fortune level up credit, help the Blades potentially trade with two health units, and deal extra burn damage to the Nexus.

While Blade Dance sounds potent with Lucian at first glance, if the opponent takes the Blade damage directly, then the tokens will be Obliterated instead of destroyed, which doesn’t help Lucian level up.

As the sole spell revealed today, Syncopation provides strict utility. Swapping two allies has been seen on cards like Stand United. And now that it’s on a two-mana card, it has an easier chance to fit into aggressive shells looking to get tricky on the battlefield. The main goal of Syncopation is to swap a big minion with a token or Elusive unit after your opponent declares their block to get some surprise burst damage in. Additionally, Syncopation can be used to avoid any single target removal that your opponent is attempting on your big-value units with fodder units.

Coastal Defender has strong synergies with the new mechanic and token summon abilities from the Shadow Isles and Shurima. While he can reach ridiculous attack totals each turn, his main weakness is that opponents can send in chump blockers at any point when his power becomes too high.

Zinneia has the most peculiar effect out of every card introduced today. Thanks to her Elusive keyword, anytime you perform Blade Dance, another three free damage will be dealt to the opposing Nexus if your opponent doesn’t have any Elusive blockers. This means if you managed to save all of your Blade Dance abilities for one turn, you have the potential to perform a devastating one-turn-kill combo.

With 39 cards revealed, there are only three more cards to be unveiled tomorrow, one of which should be Irelia.
You can try out these cards and more when LoR: Guardians of the Ancient goes live on May 5.