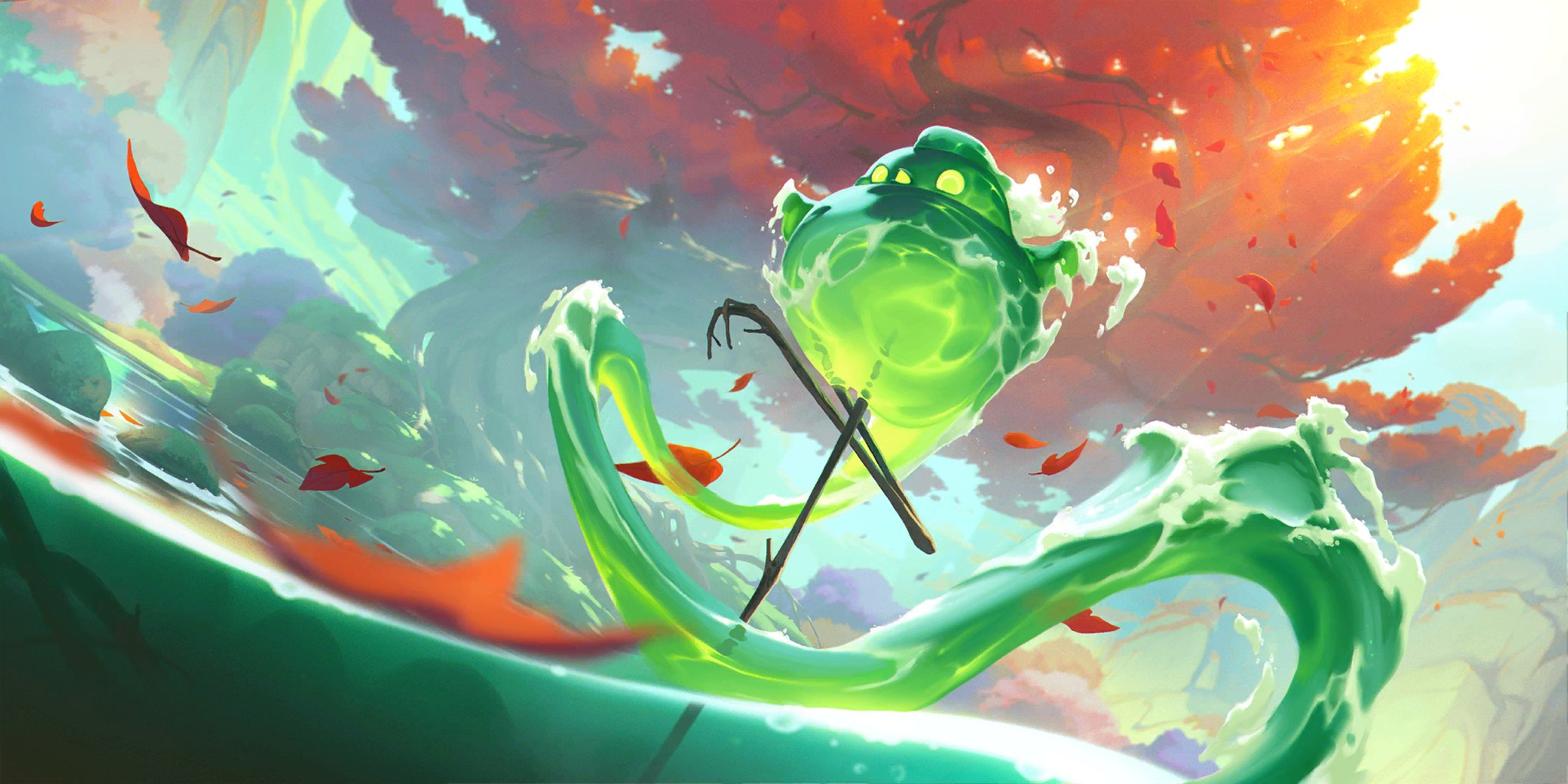 The reveal season for Legends of Runeterra’s upcoming expansion Guardians of the Ancient is less than a week away from completion. In today’s teaser, Riot Games revealed six new cards from Targon, Shurima, and Ionia in collaboration with Mobalytics: 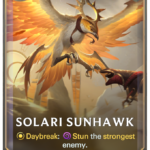 Solari Sunhawk is a Common two-mana 2/3 unit with a Daybreak ability that stuns the strongest enemy unit, similar to Leona.

Eye of the Ra-Horak is a Rare five-mana Landmark that stuns the two weakest enemies after counting down for one turn. If you make Eye of the Ra-Horak the first card you play on your turn, you can summon a copy of it with a Countdown of two thanks to its Daybreak effect.

Profiteer is a Common four-mana 5/4 unit with a summon ability that adds a Lucky Find to your hand. Lucky Finds were introduced in Empires of the Ascended as zero-mana Fleeting spells that you cast on an allied unit which either gives it a select keyword or bonus combat stats.

Merciless Hunter is a Common three-mana 4/3 unit with Fearsome and a Play ability that grants an enemy of your choice Vulnerable.

Dancing Droplet is a Common one-mana 1/1 with the Attune and Elusive keywords. In addition to this, the Droplet has an ability that draws you one card whenever it is recalled.

Shadows of the Past is a Rare five-mana Fast spell that recalls all of your allies and summons a Living Shadow in its place.

Solari Sunhawk and Eye of the Ra-Horak provide interesting support for Daybreak and Stun type decks as a whole. Solari Sunhawk is effectively a Leona ability tacked onto a cheaper unit, and if you want to run other champions, you are now free to drop Leona for the Sunhawk.

Eye of the Ra-Horak has powerful implications not only for Taliyah and Yasuo, but for the recently revealed Malphite as well. The main reason for this is due to the fact activating Eye of the Ra-Horak’s Daybreak ability will effectively summon 10 mana worth of Landmarks with just a single card while only spending five mana, which nearly levels up Malphite all on its own.

At first glance, Profiteer is an unremarkable unit due to her meager statline for her cost. But thanks to the Lucky Find she provides, she can become either a 7/3, 6/4, 5/5, or stay a 5/3 while gaining of the following keywords:

On top of all of this, even if you use your Lucky Find on a different friendly unit, Profiteer is built with an aggressive statline in mind, and she can contribute to building your Reputation.

Merciless Hunter is comparable to Baccai Sandspinner, who also draws similarities to Nocturne. Having a 4/3 statline on top of Fearsome makes the Merciless Hunter incredibly aggressive-minded. Thanks to the Vulnerable she provides, she can try to swing for the opponent’s Nexus directly while allowing other units you control to pick off key opposing enemies.

In addition to potent stats and keyword combination for aggro, her Play ability gives more potential triggers for Challenge-supported abilities for champions like Renekton and Jarvan.

Dancing Droplet is a peculiar-looking card that has synergy with both Combo and Elusive-style decks. Monastery of Hirana has been historically bad, but Dancing Droplet has a chance to turn it into a drawing machine while halting the mana loss for playing the Sanctuary provided each turn thanks to its Attune.

While this combination of cards is still probably bad and unreliable, Dancing Droplet also has good potential with hyper aggressive Elusive decks with a soft side of Recall synergies like Retreat and Shadows of the Past.

Shadows of the Past looks, and most likely is, terrible on initial impressions. But while the AoE version of Shadowshift puts you at a tempo disadvantage after the turn ends, it does allow you to turn a board of weak units into 3/2 for a push of large damage.

While self-Recall is a terrible thing for aggressive decks due to the tempo loss, this set of Ionian cards opens up a wide range of potential for newer shells to occur.

With Irelia still looming on the horizon and the revealed Ionian cards in this set, expect the Blade Dancer herself to arrive in a few days.

Try out these cards and more when LoR: Guardians of the Ancient drops May 5.