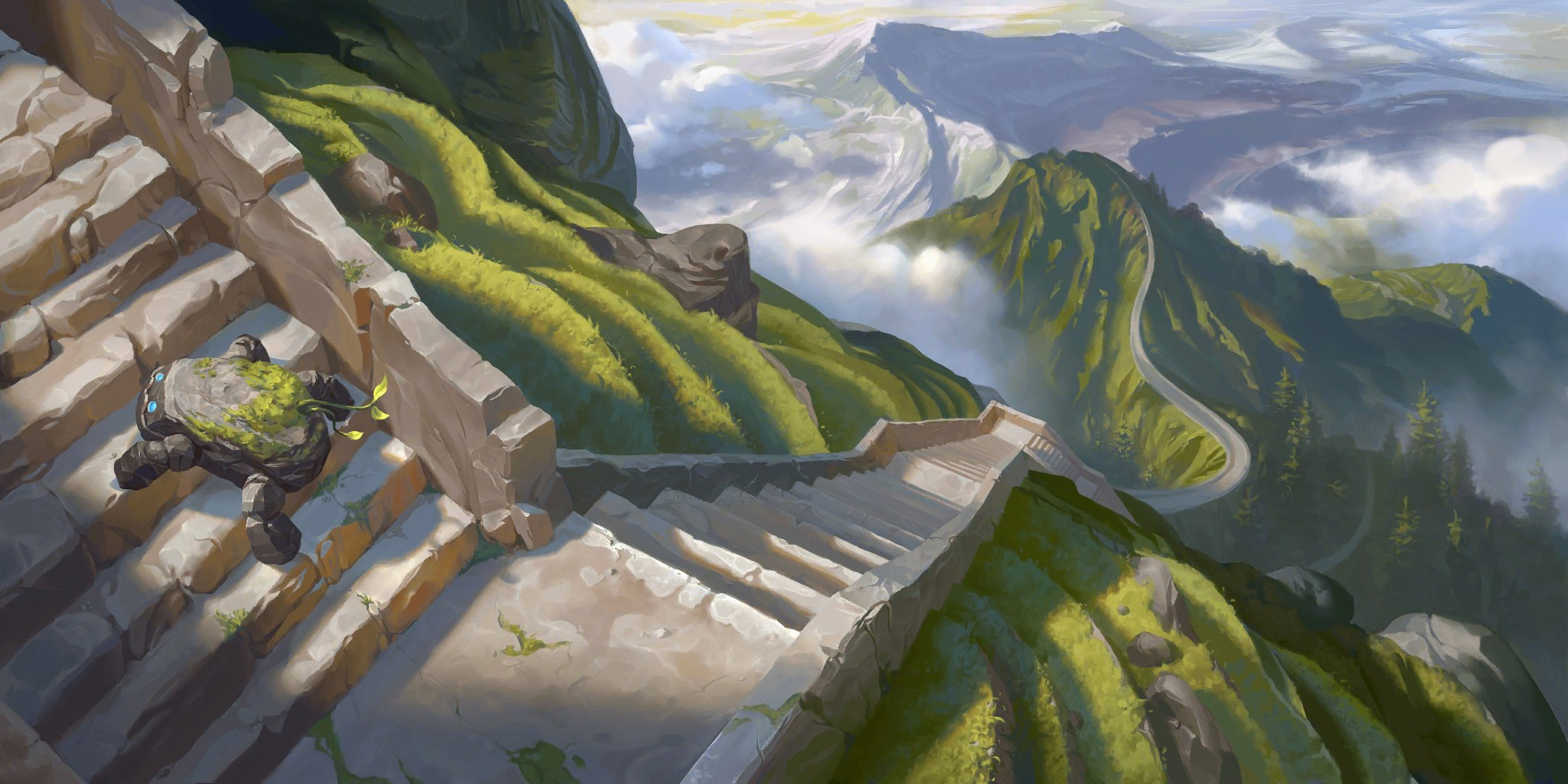 The reveal season for Legends of Runeterra’s upcoming expansion, Guardians of the Ancient, continued today by introducing four new cards from Targon—and they all add onto Landmark support.

The latest cards that Riot has shown off include Spiral Stairs, Rockfall Path, Earth Elemental, and Blue Sentinel. 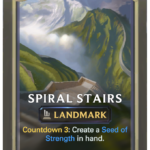 Spiral Stairs is a Rare three-mana Landmark that provides you with a Seed of Strength after counting down for three turns. Seed of Strength is a Fleeting zero-mana Slow spell that grants an ally a permanent +3/+2 and Overwhelm buff.

Rockfall Path is a Common two-mana Landmark that has a Countdown of two that Obliterates the weakest enemy.

Earth Elemental is a Common four-mana Overwhelm 3/5 unit with a passive ability that increases his stats by +3/+0 if you’ve summoned four Landmarks during the match. Similar to Chip, which was revealed earlier this week, you can either summon the four Landmarks before or after the Earth Elemental has reached the board and still receive the bonus.

Blue Sentinel is a Common two-mana 2/3 unit with a powerful Last Breath that summons a Crest of Insight to your side of the field. The Crest is a Countdown Landmark that detonates after one turn. Upon its completion, you’re given a bonus Mana Gem for that round, which can lead to powerful temporary ramp opportunities.

Aside from potential synergies with Malphite, who will be revealed soon, Taliyah will greatly benefit from having more Landmarks to potentially copy with her abilities.

The weakness with the current Landmark pool is how much mana you invest to not add any combat stats to your side of the field, which doesn’t help you contest the board in a meaningful way. Thanks to Blue Sentinel, you can at least have a unit with a fair stat line to help fight for you before being replaced by a potent Landmark.

The Crest of Insight has powerful midrange and mana ramp implications while giving you bonus mana on the turn following the death of your Blue Buff. This power can be taken to the next level with Taliyah. If you manage to time the Sentinel’s death with Taliyah’s Play ability on turn five, that means you can potentially play an eight-mana card in round six.

Spiral Stairs and Rockfall Path are interesting cards that are part of a cycle of Landmarks for both the user and opponent to play around. Rockfall Path provides absurd removal for its mana cost, but an opponent can play around it by either going incredibly wide and having fodder take the removal or not playing any units to make the effect go to waste.

Spiral Stairs can grant you access to free Overwhelm at a rebate by paying three mana in advance. One downside to Spiral Stairs is that the Seed of Strength provided is a Fleeting spell, meaning you’ll lose the card if you don’t have any units to buff when you receive it. To set yourself up for success with Spiral Stairs, you should play the Landmark on a turn where you don’t have the attack token. After three Countdown rounds pass, the detonation will occur when it’s your time to attack, allowing you to play the Seed before giving your opponent one action in response.

As a four-mana 3/5 unit, Earth Elemental has a fair stat line for its mana cost and can become more aggressive if you satisfy its Landmark summon condition. If the Elemental becomes a 6/5 for only four mana, it can quickly turn on a clock for the opponent to answer thanks to its Overwhelm keyword. Since its power spike is incredibly similar to Taliyah, your opponent can be quickly threatened if you manage to get both on the field at the same time.

With all of these Targon and Countdown Landmark-related cards being shown off today, Malphite’s reveal tomorrow is essentially guaranteed.

Test out these cards and more when LoR: Guardians of the Ancient goes live on May 5.