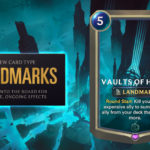 Legends of Runeterra: Monuments of Power‘s newest mechanic, Landmark, is the keyword with the main focus for the expansion.

Landmarks are a new type of card that you spend with normal mana and play onto the board. They are unable to attack, block, or be Challenged. But they provide unique and persistent effects as long as they exist on the board. Removing them can only be done through certain spells, by both new cards coming with Monuments of Power and old ones that will be updated like Falling Comet and Singular Will.

Each Landmark either helps out existing archetypes or creates a space for new strategies to flourish.

Here are all of the Landmarks coming with LoR: Monuments of Power.

This Shadow Isle-based Landmark helps push Last Breath-style decks while also giving players opportunities to find devastating evolution chains within their decks. For an initial five-mana investment, your most expensive unit is destroyed and a unit from your deck is summoned that is one mana higher than it.

The most devastating chain theorized at the moment involves Anivia the turn after playing, which is destroyed by the vaults and revived by The Rekindler summoned from the Vaults. Afterwards, The Rekindler can be replaced by a Tryndamere, who will survive the Vaults and then summon a Commander Ledros, even if his Play effect won’t activate.

Bilgewater’s Landmark synergizes with the Toss and Deep keywords that were introduced in Rising Tides. For three mana, The Slaughter Docks tosses a card from your deck at the start of each round. If your deck is in Deep mode while The Slaughter Docks is on the board, it is destroyed to summon a random Sea Monster in its place.

Since The Slaughter Docks is focused on the strategy it is paired up with, its home is most likely Nautilus and Maokai-style decks that rely on tossing cards in their deck to help level up both champions as soon as possible. While the initial tempo loss for playing The Slaughter Docks is too big to ignore, the return on it by helping accelerate your tossing process and rewarding you with a random Sea Monster at three mana is nothing to scoff at.

Similarly to the Vaults of Helia, The Slaughter Docks also summons the card, so Play effects, like Devourer of the Depths, will not activate.

Freljord’s Landmark is an expensive value engine that is themed after the popular League of Legends mode, ARAM. For seven mana, at the start of every round, The Howling Abyss provides you a random level-two champion as long as it’s not in your hand, deck, or battlefield.

Even if this effect sounds daunting at first, the initial seven mana investment for doing nothing the turn The Howling Abyss is played is very punishing if the user is behind on board. In addition to this, while some level-two champions sound dangerous to get for free, like Aurelion Sol or Thresh, it is equally as likely to get champions that cannot synergize with your deck like Teemo, Fizz, and Elise.

Targon’s Landmark is the cheapest of the Landmarks so far. For only two mana, you heal all friendly units for one health at the end of each round. If Star Spring has been on board to see you heal 22 damage, you win the game instantly.

Star Spring’s effect promotes value trading and cards which benefit from healing like Star Shepherd. While the 22 healing alternate win condition looks exciting, it shouldn’t be the main appeal behind the card as it is tough to achieve that. Star Spring doesn’t witness overhealing, and if the Landmark is destroyed, any progress you made will be reset by the next time you play a second Star Spring.

Both the recently revealed Soraka and Star Spring mutually benefit from one another. The Star Spring itself provides another consistent source of healing to help level up Soraka faster than usual, and Soraka herself gives massive healing opportunities to help threaten the opponent with a chance to win through the alternate win condition of Star Spring.

In addition to this, once Soraka levels up, the Star Spring gives you an extra draw at the end of each turn if you didn’t heal for that turn due to level two Soraka’s ability.

The University of Piltover

Out of all of the Landmarks that have been revealed thus far, the University of Piltover is by far the most random of the bunch, even more than the Howling Abyss. At the start of each round, your hand is discarded and replaced with three random Fleeting cards from your regions.

While this effect may sound too varied and weak to even be considered in a deck slot, especially when compared to Augmented Experimenter, it is the cheapest and fastest way for the Piltover and Zaun region to discard a hand entirely while maintaining a sizable hand of cards to play. This allows you consistent access to leveling up Jinx and achieving Super Mega Death Rockets with her ability each turn.

Noxkraya Arena was the last landmark to be revealed out of the current bunch and is the fastest one to impact the board. At the end of each round Noxkraya Arena forces your strongest ally and the weakest enemy to strike each other.

This enforces an interesting dynamic where your opponent may begin to make suboptimal plays to protect their weak but high-value units. Understanding the proper timing to play this card is key to finding success with it, if you play it when your opponent has multiple options, they can forego playing multiple weak units and instead play a few strong units, allowing them to make better use of the Noxkraya Arena against yourself.

Build upon these Landmark strategies when LoR: Monuments of Power releases Oct. 14 with 40 new cards in total.