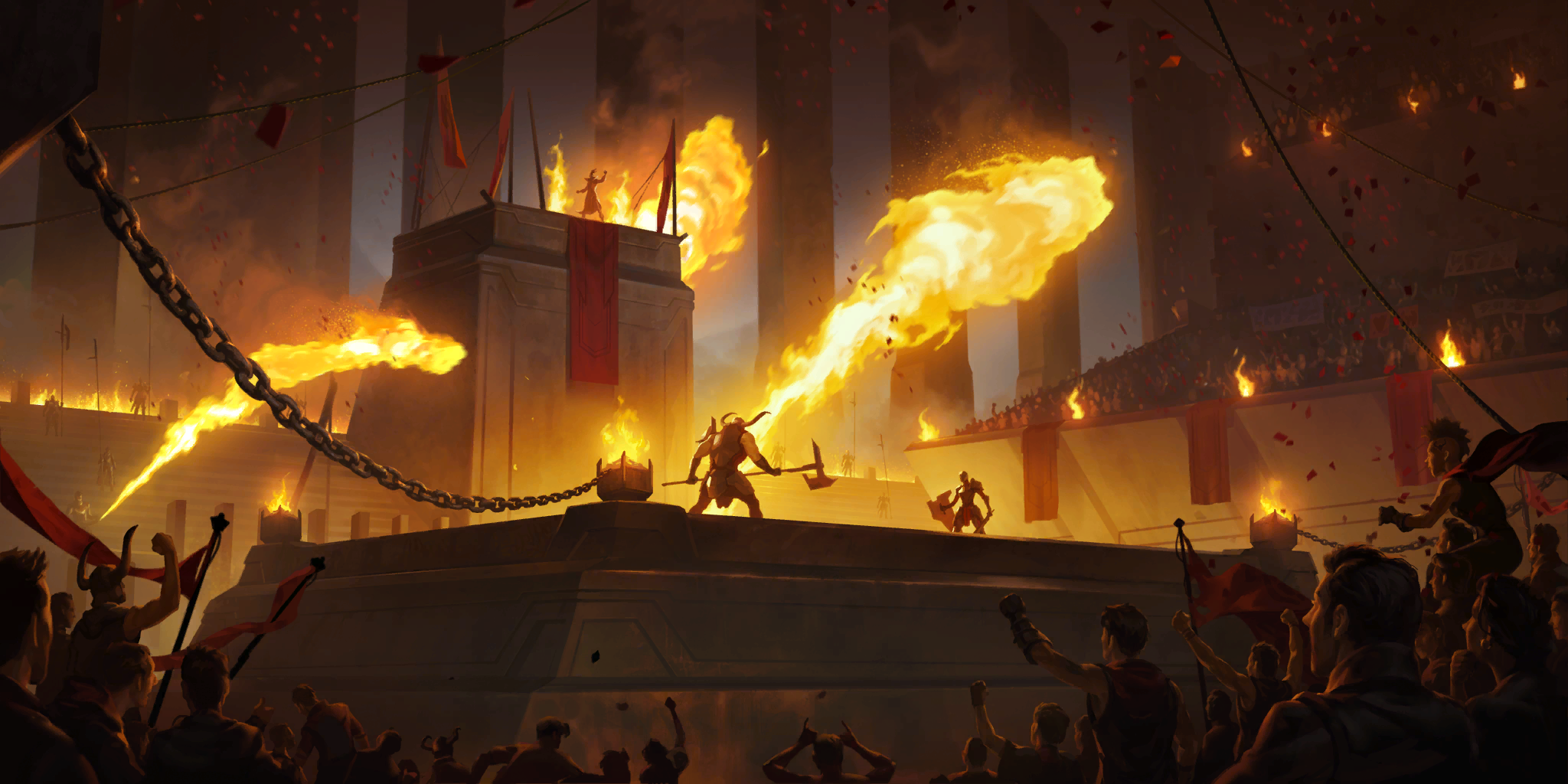 Legends of Runeterra: Monuments of Power’s card reveal season is on its penultimate day before the expansion’s release. Riot Games revealed today the last Landmark coming with the expansion and it’s from Noxus, Noxkraya Arena.

The newest mechanic arriving with Monuments of Power, Landmarks, are new types of cards that provide you with ongoing effects after you play them onto the board with regular mana.

Noxkraya Arena is an Epic five-mana Landmark that has your strongest unit and the weakest enemy unit strike each other at the end of each round.

Alongside the revealed Star Spring, Noxkraya Arena is the only Landmark that immediately impacts the board after being played, assuming you already have units to take advantage of the effect. It is also a more consistent effect when compared to The University of Piltover and The Howling Abyss.

Related: Every Landmark In Legends of Runeterra‘s Monuments of Power Expansion

Noxkraya Arena helps push potential Noxus Midrange strategies forward, as Noxus Aggro has no need for spending this much mana to force combats at the end of every single turn. One of Noxus’ weaknesses is that its removal is either conditional, like Culling Strike, Noxian Guillotine, and Reckoning, or temporary with Stuns, with Minotaur Reckoner and Arachnoid Sentry as examples. Since Landmarks are persistent effects that last until they’re removed, this gives Noxus a new source of removal that lasts every single turn that both players will need to play around.

With the new arena, as long as your board has higher stats than your foe, you can perpetually remove puny units and threaten your opponent from avoiding playing weak but valuable units like Heimerdinger, Ezreal, and Lulu. Additionally due to the timing of Noxkraya Arena’s effect activation, it is impossible for players to add new card activations onto the forced combat. This means that if your opponent has ways to add barriers during the combat, it is possible to snipe out slippery champions and decks like Lee Sin or Fiora while avoiding all of those tools.

One major weakness to Noxkraya Arena is that if the opponent’s deck has more stronger individual units or cards with Regeneration, like a Garen or Trundle, it is possible that they will be able to turn the benefit of the arena into a weakness. Knowing when to play the Noxkraya Arena will be key to avoiding this scenario.

With Demacia being teased after Noxkraya Arena’s reveal, this leaves only one more champion to join with Monuments of Power’s release: Shyvana. According to previous leaks, this leaves Riven, Viktor, and Zoe as the last known champions to come with the December expansion release.

Face off against your opponent’s weaklings in the Noxkraya Arena, when LoR: Monuments of Power releases Oct. 14 with 40 new cards.