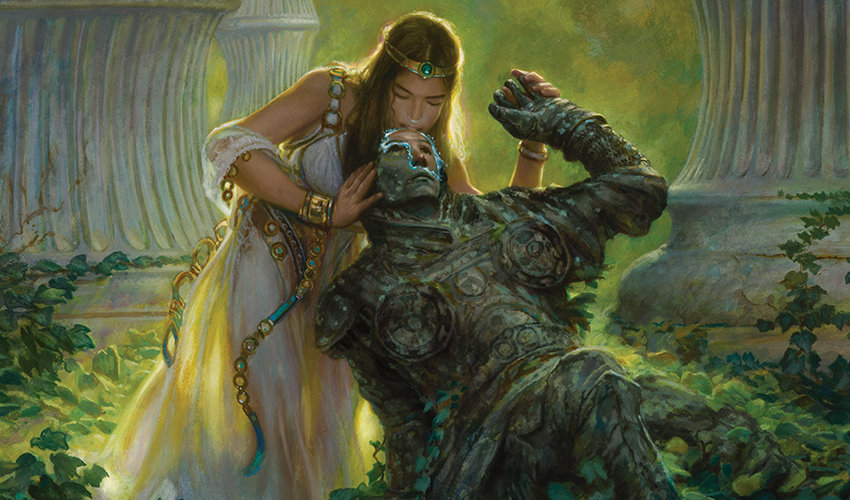 Day three of the Throne of Eldraine spoilers lived up to the hype with the return of Opt, to more Food token sacrifices, and everything Magic: The Gathering in between.

Releasing in a few weeks, the Throne of Eldraine (ELD) spoilers from today had a decent amount of hits and a few misses. With over 20 cards revealed today, there’s a little something for every format.

A few of the cards are still in foreign languages (and images are blurry). They’ve been translated and formated (to the best of our abilities). And don’t forget to check out the feature Throne of Eldraine spoilers from today.

Three damage for two mana takes the place of lightning bolt. And as an added bonus, if the creature or planeswalker dies, it gets exiled.

Stolen by the Fae

More of an ELD Limited card, Ayara has the potential to work in a Rakdos sacrificial Standard themed deck. Priest of Forgotten Gods is better, but Ayara has the ability to sac one as opposed to two when a creature is stolen.

Integrity is a reprint of the M10 Instant, Righteousness.

Gadwick, the Wizened is a solid card in ELD Limited, with possibilities in Standard. It hits the three-drop curve nicely and later on in a match can produce multiple cards via cantrip (card draw). Almost like a blue version of Champion of Dusk.

Any 4/3 dragon with flying and theft is worth four mana. Opportunistic Dragon is a solid standard card and a bomb in Limited.

Cauldron Familiar fits the sacrificial Rakdos deck theme. It’s a chump blocker who can return to the battlefield upon sacrificing a Food token.

Insatiable Appetite isn’t as good as Giant Growth, but in Limited it has potential. If Food tokens are plentiful, it’s two mana cost becomes worth the +5/+5.

Having a 3/1 creature in Limited adds a nice aggro twist. Being able to sacrifice food, forcing another creature to block your Maraleaf Rider, is cheap removal.

Despite the suggestive tone implied by her name, Bog Naughty is a flyer worth picking up in ELD Limited. Of course, she’s not worth much without the Food tokens. But if Food is plentiful, start tapping to begin removing threats.