A new Magic: The Gathering Instant called Into the Story is crossing the threshold into the Throne of Eldraine set.

Based on folklore and fairytale stories of old, Magic’s head designer Mark Rosewater first revealed the Throne of Eldraine (ELD) set with an image of Into the Story. And the imagery is fitting for Control decks in MTG. 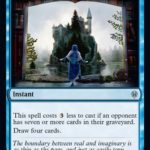 Threshold is an ability word that was first introduced in the Odyssey set as a mechanic. It triggers if its controller has seven or more cards in their graveyard. Into the Story features a girl “crossing the threshold.” The mechanic isn’t in the text but its composition remains.

For Control decks, Into the Story will fit nicely into the main deck. Once the graveyard specifications are met, it costs four mana to cast. It’s similar to Drawn from Dreams (M20), but better due to its casting at instant speed and not sorcery.

In MTG Control decks, card advantage takes precedence over card selection. Casting a sorcery speed leaves a player vulnerable to counters and slows down the tempo. For a Control deck to succeed, it needs to have an advantage over its opponent at all times.

Within Standard, Narset, Parter of Veils is an obstacle, but one that can be removed prior to casting Into the Story.  It’s not a card that’ll hold value early on in a match, but Into the Story has the potential to draw into a win-con later in the game.

Related: Here’s every Throne of Eldraine spoiler from Sept. 11

The Throne of Eldraine set releases on Oct. 4 via tabletop and on Sept. 26 via MTG Arena.