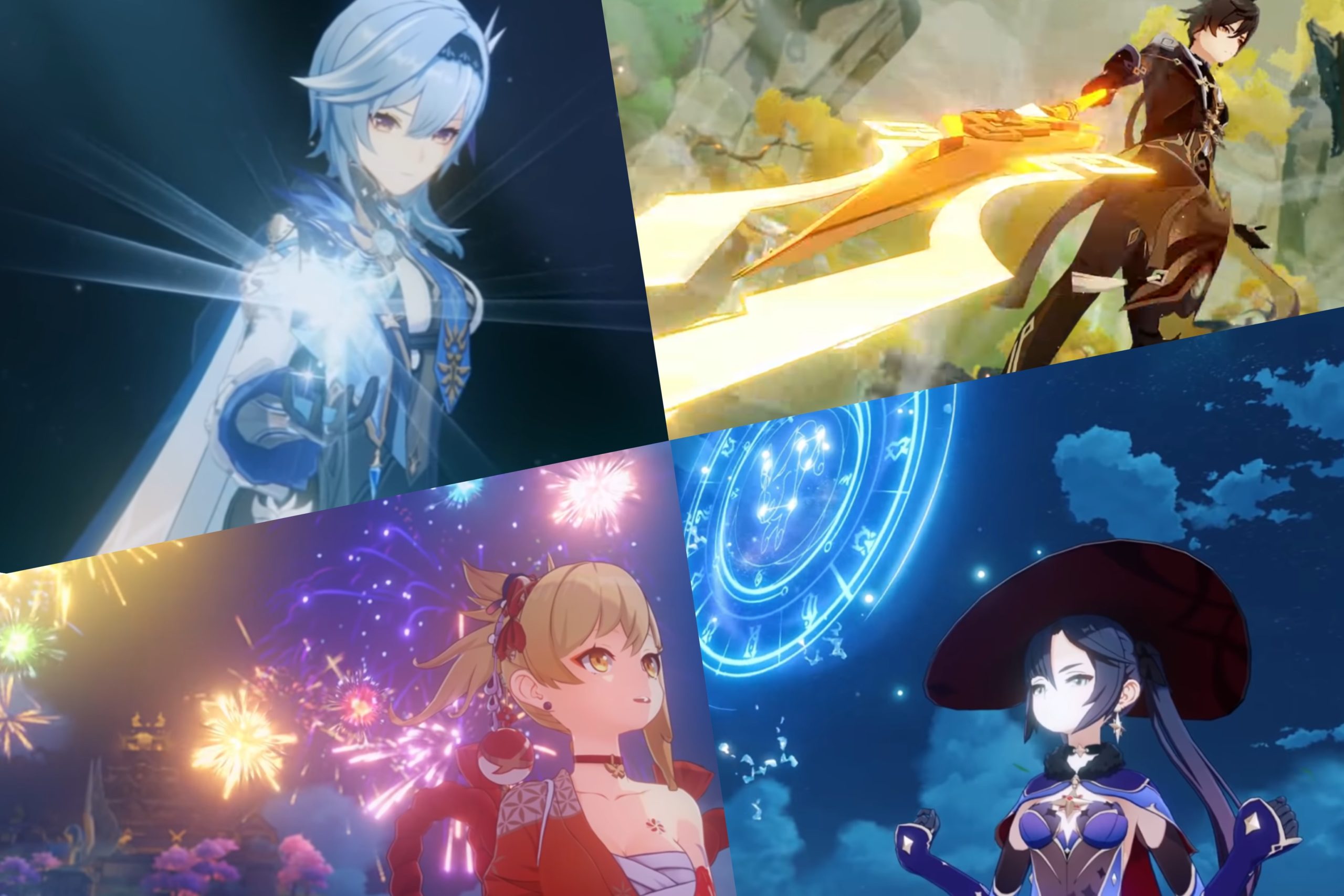 One of the best aspects of Genshin Impact is the many unique characters available for players to collect. But since most of the characters in Genshin Impact require time, effort, and luck to attain, it is important to know which characters are worth spending your hard-earned Primogems on.

Luckily, no character thus far in Genshin Impact ranks below C tier because when built right, any character can be effective. Collecting multiple of a character and thus unlocking their Constellations also helps because Constellations make all characters much more powerful.

Here is a complete breakdown of where every character in Genshin Impact ranks and why they are ranked there.

The best of the best are, as is to be expected, all five-star characters. This category has the second most characters of any tier because generally, Genshin Impact makes really powerful and unique characters who exceed expectations.

The five-star Cryo Claymore queen stunned fans when she was introduced to Genshin Impact in May 2021. Her quickness and agility are unprecedented when it comes to Claymore characters. The balance she has between damage output and swiftness makes her a mighty force to be reckoned with.

The powerful Cryo character continues to stun players as an impressive damage dealer despite being a Bow character. The fact she is a Bow character is part of what makes her one of the best characters as she is one of few who can deal immense long and short-range damage.

The Anemo Archon is an all-around excellent character that excels in all areas. His Anemo abilities make exploration a breeze, he’s great at rounding up many enemies at once, and he’s effective yet agile on the battlefield.

The broody owner of Dawn Winery stands the test of time because although he was among the first five-star characters released in Genshin Impact, the Pyro Claymore character is still one of the best. When angled right, Diluc’s Elemental Burst swoops down on enemies and can take out as many as are in his path at once. His Elemental Skill also allows for extremely consistent yet powerful Pyro damage.

The wandering samurai warrior plagued by a traumatic past boasts powerful and versatile Anemo abilities. The Genshin community often refers to him as a “battery” that recharges Energy at a fast pace making him an excellent recruit for any roster.

The leader of the Kamisato clan is a quick and effective damage dealer. Hydro characters often seem weaker due to their element often being overshadowed by stronger elements, but Kamisato Ayato functions flawlessly as a main damage dealer and makes Hydro look like the strongest element of all.

The Inazuman princess deals effective damage and easily applied the Cryo effect whenever needed. She also has a special cloaking sprint that allows her to move faster, easily evade enemies, and glide over any body of water which makes her movements swift and precise.

The precarious balance Hu Tao requires to be effective does take a while to perfect, but once players have mastered her unique mechanics they will find she is a Pyro powerhouse. Her immense damage output that costs her Health Points over time is well balanced with high base Health Points and Defense.

Similar to Hu Tao, Xiao too requires a learning curve due to his unique mechanics. Once players are used to the adeptus, they will find he can deal massive amounts of Anemo damage and plunge down to attack opponents relentlessly.

The Cryo Polearm character excels at buffing the rest of the party and weakening opponents. Her abilities also work best alongside one or more other Cryo characters, but Shenhe is a powerful addition to any team regardless.

Indisputably one of the best support characters, Mona’s ability to apply Hydro to enemies and use her cloaking sprint to flee the scene make her a great pick. Her special cloaking sprint type, which is an exclusive ability only she and Kamisato Ayaka possess, makes exploration and battle a breeze. She can also distract enemies with her Elemental Skill so that she or her team can then easily take them out.

While often overlooked in favor of other characters, the Grand Master of the Knights of Favonius is one of the best and most versatile characters in all of Genshin Impact. Not only is Jean arguably the best healer in the game, but she also makes Anemo Elemental Reactions like Swirl easy and consistently deals a solid amount of damage while also healing with every hit.

The characters who fall into the A tier are those five-stars who are still stellar, but don’t quite shine as much as the rest. These characters are generally what is expected for five-stars, no more and no less.

The Geo alchemist excels at dealing area of effect damage and has an Elemental Skill cooldown of only four seconds meaning it can be used very consistently. He is an overall solid recruit for any Genshin team.

The walking Pyro bundle of chaos is great at causing explosions that damage enemies. However, she only really functions as the primary damage dealer and isn’t the best at dealing high levels of damage quickly. With the right Constellations unlocked, Klee can be a support character for the rest of the party which unlocks more potential for her.

One of the best aspects of Bow characters is that they can deal damage from a distance away and this is definitely one of Yoimiya’s strong suits. The firework-loving Pyro character also has an Elemental Burst that buffs the Attack of her party members.

The independent, brave Electro Sword character isn’t the best damage dealer, but her unique teleportation ability is great for battle and exploration making her an overall solid pick.

The little Cryo zombie character excels most with the strong healing she provides for her team. Her Cryo application isn’t as good as Cryo characters higher up on this list, but her healing combined with her Cryo abilities still make her a great character.

While the overseer of the Grand Narukami Shrine can deal excellent Electro damage, her abilities require immense precision and thus she oftentimes falls short due to her complex mechanics.

The free five-star crossover character from Horizon Zero Dawn is surprisingly good, especially when compared to the only other free five-star that players have gotten which is the Traveler. Aloy excels at applying Cryo damage wherever needed but currently lacks Constellations and can sometimes be overly complex due to her coil stacks.

A rather divisive character that is also known as “Childe,” Tartaglia has a very long cooldown and is not great at dealing high levels of damage. He functions best as the primary or secondary damage dealer yet most other characters function better in these roles than he does.

The other vast majority of characters fall in B tier because they are not the best but still very strong choices. Most of these characters are four-stars unless otherwise noted.

Many in the Genshin community call Bennett a “secret five-star” because of his impressive Pyro abilities and decent healing capability. He is one of the best support characters available as he heals and buffs the rest of the team while also dealing a solid amount of Pyro damage.

The Electro Bow character deals rapid damage and functions flawlessly as a secondary damage dealer. She applies the Electro effect easily and her abilities stay on the battlefield even when she is not making her a great recruit for any roster.

The stellar chef also moves and attacks at a fast pace while consistently dealing Pyro damage. Her bear friend Gouba is less consistent though, and since her Elemental Skill is to summon him, this makes her fall a bit lower on the list than she otherwise would.

Although Sangonomiya Kokomi is a five-star, her lack of Attack power makes her one of the worst five-stars thus far. Her healing and Hydro abilities are great, but she has no Critical Hit power, has a high energy cost for her Elemental Burst, and is lacking when it comes to Area of Effect damage. She is easily outdone in healing by Jean and Hydro abilities by Mona, but may function well in certain teams.

The adorable Sayu, who is notably voiced by streaming star and singer LilyPichu, is a highly effective Anemo Sword character. Sayu has a unique spinning Swirl ability that helps her travel, apply Anemo effects very quickly, and heal.

The part-cat bartender who hates alcohol provides healing and shields for her team making her a solid support character whose main drawbacks are low health and low damage output.

While a bit slow at attacking, Chongyun’s elemental abilities are pretty effective in battle and he is an overall decent secondary damage dealer or support character.

The Hydro Catalyst character excels at healing but has a long cooldown period and can do very little damage since her elemental abilities are entirely dedicated to healing.

While Razor can deal solid amounts of Electro damage, he can only do so at close range and overall doesn’t excel as much as other Claymore characters do.

The Geo Catalyst character has an effective shield ability and can deal some decent damage but moves fairly slowly and isn’t great at targeting many enemies at once.

The Anemo alchemist functions great as a support character by increasing the parties’ Elemental Mastery and grouping large amounts of enemies close together to deal efficient damage.

The talented Geo dancer and singer is a great support character who consistently generates Elemental Particles, boosts Normal Attack damage, and has decently low costs for her Elemental Skills.

The captain of The Crux is a solid Electro damage dealer but is dragged down due to a high energy cost for her Elemental Burst and sometimes complex mechanics.

The Geo general of the Watatsumi Army provides solid support by boosting Defense and resistance to interruption.

While he can function decently in a support role, Thoma’s overall damage output is disappointing and his Elemental Skill cooldown is long.

The rock and roll Pyro musician can deal some decent damage and also has a shield ability, but is somewhat disappointing due to a lackluster damage output overall.

The kind Geo maid has a high starting Defense and can use her Elemental Skill to help heal the entire party but doesn’t deal much damage overall.

These characters certainly aren’t bad which is why they are located in the C tier rather than a lower tier. C tier characters can be good when built right and after their Constellations have been gathered, but even then, they will have required far more work than other characters and won’t perform as well as them.

While the protagonist of Genshin Impact is the only character with the ability to switch between elements, they still pale in comparison to most other characters available in the game. Unfortunately, because there are oftentimes battles during the storyline that must be done as the Traveler, players really have no choice but to build the Traveler so that when they do use them they perform decently.

Regardless of which element you switch the Traveler to, they are still a C-tier character because other characters of the same element far outperform them.

While Kaeya isn’t necessarily a bad character, even with full constellations and an excellent build he simply will never outperform other characters ranked higher up on this list due to his weak damage output.

Often described by those in the Genshin community as “a worse Fischl,” Kujou Sara’s Electro Bow abilities fall short in spite of the fact she was released far after Fischl.

Because Lisa is another free character given very early to players in Genshin Impact, it isn’t that surprising that the Electro Catalyst character is lackluster.

Arguably the worst character in all of Genshin Impact, Amber’s Pyro Bow abilities are overwhelmingly unimpressive especially when compared with those of fellow Pyro Bow character Yoimiya.