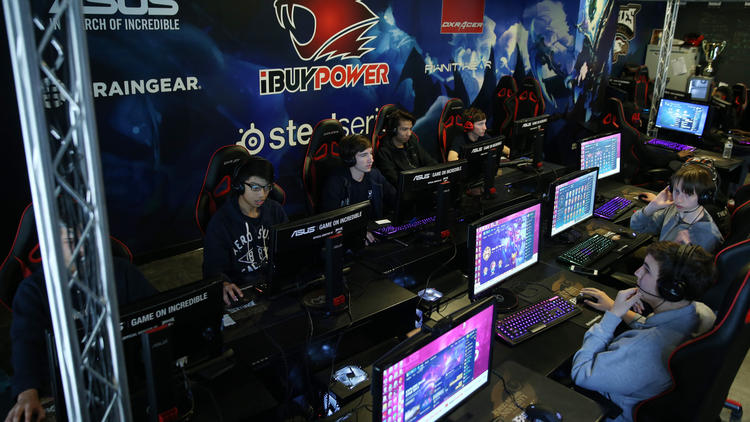 During his junior year at Oswego High School in Oswego, Illinois, Jack LaMarre created an esports club with his friends. At the insistence of their advisor and League of Legends coach, Ed Cann, they dabbled in a few League of Legends tournaments, but were mostly playing for fun.

Then came senior year, when most students begin preparing for college. Cann began contacting schools about esports scholarships on behalf of LaMarre. LaMarre ultimately chose Robert Morris University (RMU) in Chicago, Illinois (which, in 2014, became the first school to launch esports scholarships), because he had met some of the staff there through a tournament in his junior year.

LaMarre was one of the first players to go straight from the high school esports scene to collegiate esports. Fellow Oswego student Shane Smykal followed in LaMarre’s footsteps a year later, committing to Indiana Tech earlier this year. Cann also helped Smykal catch the eye of numerous colleges, inviting scouts to tune in to the High School Esports Invitational, a tournament put together by Oswego’s team. Smykal’s decision to attend Indiana Tech was based on a number of factors, one of which was the chance for a League scholarship.

These scholarships range in the amount of money offered, but many are comparable to traditional sports scholarships. For example, at RMU, scholarships can cover half of both the cost of tuition and that of room and board.

Colleges and universities need a way to recruit new players, and the natural solution is to take players straight from high school. Students around the country, like those at Troy High School in Fullerton, California, began setting up their own tournaments a couple of years ago in hopes of receiving varsity scholarships. These events served a dual purpose by allowing students to both show off their abilities and gain valuable experience playing in front of large crowds, an important aspect of the collegiate esports scene and beyond.

Varsity esports scholarships are still a novelty, and many universities have yet to even create esports teams. As the collegiate scene evolves, high schools are following suit, quickly building an esports infrastructure across all levels of the U.S. education system. As the two scenes grow side by side, a path for gamers through college becomes more clearly defined.

Alongside tournaments, students are creating organizations across the country to cultivate the high school esports scene. The establishment of these national groups dedicated to esports offers high school students the opportunity to build connections with others who share the same passion.

Former THS student Justin Jia created an organization, YEA, in 2017 dedicated to helping high school students organize esports clubs. The organization guides students and provides a template for them when establishing their own clubs. At this time, YEA has chapters located across the country, with most of them concentrated in the Southern California area.

“This organization is built to give some sort of a master schedule to all these organizations together, and then create big events that schools can participate in while at the same time not have to host, and that just makes everything a lot simpler,” Jia told Dot Esports.

Hunter Strokin is the president of the Center for International Education’s esports program, and attributes YEA and Jia with allowing him to start his club. It’s a Cambridge-affiliated school located in Florida. Strokin was one of the first students to partner his school’s club with YEA after failing to get responses from other established high school esports associations.

“In the beginning, we were just there to go along with the ride and seeing where YEA would go, in the hopes of having that exposure for the club,” Strokin said. “It started off more as a couple of really passionate esports enthusiasts who wanted to start high school esports, and it kind of just grew into what it is now.”

YEA faces stiff competition from another established group, the High School Esports League (HSEL). Backed by the National Association of Collegiate Esports (NACE), HSEL holds a national esports league each year and is affiliated with popular streaming site Twitch. In February, HSEL and Twitch announced a partnership that would help students transition from the high school level straight to collegiate by giving them a platform to stream their competitive games.

This gave scouts and coaches from universities an easier way to contact potential scholarship students.

Just two months later, venture-backed startup PlayVS announced an initiative to bring esports programs to high schools around the country. Partnering with the National Federation of State High School Associations, the company is looking at having two regular seasons each year across a variety of games.

“We partner directly with game publishers to operate the leagues,” PlayVS CEO Delane Parnell said via Twitter. “Our teams collaborate on everything including the competitive structure.”

Even game creators are jumping into the high school scene. League of Legends creator Riot Games teamed up with HSEL to bring a League tournament to high schools in Australia in May 2018.

Problems and the future

The deals made by companies to bring esports to high schools reflect the efforts made by organizations and students across the nation to smooth the transition to the collegiate scene. What was once just a hobby for bored students has become a legitimate path to higher education. Yet this change didn’t happen overnight. Daniel Hernandez, the founder of an esports club at Lane Technical College Prepatory High School in Chicago, Illinois, has witnessed the evolution of high school esports over time.

“I don’t recall having someone step up to a podium and telling hundreds of adults, ‘This is a thing. You should care about it.’ I think it was over time, as ourselves, we decided to grow and show off more events,” Hernandez said.

There’s one area that lags far behind traditional varsity sports. While most of the technical difficulties with setting up tournaments have been figured out, some schools still experience problems with parent support.

At Diamond Bar High School in Southern California, former esports club president Elise Hou said that the parents of the school’s official team have been extremely supportive, even showing up to an away tournament to cheer their children on. Parents of non-team members, however, have failed so far to show enthusiasm for the events put on by the club, despite esports scholarship offers from Silicon Valley-based university Menlo College.

“In order for high school esports to get big, these parents need to show other parents that there is a future in esports and they should represent that,” Hou said. “You have to show parents that even after being a professional gamer, there are so many opportunities for you to work in the industry.”

For example, many former League pros, like Michael “Imaqtpie” Santana, turned to streaming after their professional careers ended. Santana is now one of the most successful streamers on the platform, earning an excess of $2 million a year. Others, like Thomas “Thinkcard” Slotkin, turned to coaching. Thinkcard was previously the head coach for North American LCS team Echo Fox. Former League pro Alberto “Crumbz” Rengifo became an analyst for Blizzard Entertainment’s Overwatch League.

Over time, as esports becomes a more accepted path to higher education, parental support will likely become less of a factor. As parents get on board with the idea of esports as an actual career, it’ll become easier for students to attract the attention of colleges and prove that they possess the ability to play at a high level. Current RMU student LaMarre encourages students to work closely with their coaches in order to help smooth the transition to the next level. Without his high school esports coach Cann, he would have had a much harder time getting his own scholarship.