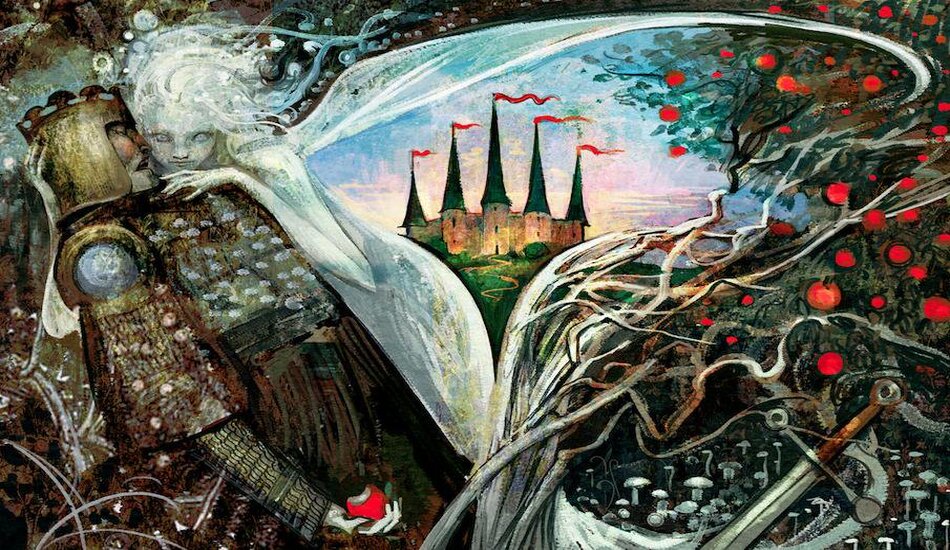 Week two of the Throne of Eldraine spoilers are officially underway with a heavy focus on Limited and a few bombs ready to jump-start Standard archetypes.

With the release of Throne of Eldraine (ELD) just 10 days away via MTG Arena, the community is gearing up for Limited Draft and Standard Constructed. The focus of today’s ELD spoilers leaned heavily on play within the Limited format.

From a Black two-drop with Flash to several Common rarity Showcase cards, Limited saw a variety of options. And for Standard, there was a Queen of lifegain for White and a Noble Dwarf in Red seeking to steal those life points.

Here’s every Throne of Eldraine spoiler from Sept 16. And don’t forget to check out the ELD reveals that were featured today.

Translation of Archon of Absolution:

A 3/2 flyer for four mana is solid in Limited. But Archon of Absolution makes attacking quite difficult on your opponent. If they would have four attacking creatures, then four mana would be required as payment for those creatures to attack. Add on that it has protection from White, and this Archon will certainly find its way into Standard sideboards.

Drown in the Loch

Not a card likely to see play in Standard, Drown the Loch will have a big impact in Modern and be worth holding onto in Limited. Keep a copy or two and hang onto it until later in the match, using your opponent’s graveyard to your advantage.

For the first time in MTG history, it’s plausible to play a mono-color in Limited. Ardenvale Paladin is one of several reasons to give it a shot in White. Being able to play a 3/6 on turn four is better than solid in Limited and possibly in Standard, too (Knight tribal theme). Unless your opponent has flyers, Ardenvale Paladin is there to block and attack on occasion.

Rally for the Throne

In another example of an ELD card designed for mono play in Limited, Syr Alin, the Lion’s Claw is a bomb. As a 4/4 with First Strike, while pumping all other attacking creatures +1/+1 until the end of turn, Syr Alin is worth the five mana cost. From a Standard perspective, however, Syr Alin is on the weak side, for now.

Removal in Limited is key, especially in a two-drop spot. Technically, Blacklance Paragon is a 3/1 with Flash. But due to it gaining deathtouch and lifegain upon entering the battlefield, it’s a cheap costing high-end removal that produces three life points.

In what might have been a clunky “bring back your dead” sorcery spell, Forever Young makes the cut due to cantrip and mana cost. At Instant speed, it would be too powerful. But for two mana, it’s worth bringing back a key creature or two and then drawing them into hand.

In a self-mill reanimator deck, Cauldron’s Gift has potential. First is the Adamant mechanic, letting the player drop four cards from the library into the graveyard. This is a solid option (no option if Mono-Black) if there aren’t creatures in the graveyard. And as an added bonus, the creature you choose to reanimate gets a +1/+1 counter and return directly to the battlefield

The Cauldron of Eternity

Upon first glance, The Cauldron of Eternity looks like a solid reanimator Artifact. At some point, it might be, but in the current Standard meta its likely too much of a risk to play. Instead, it should fit better within a Golgari Undergrowth deck.

Sorcerer’s Broom is an interesting two-mana Artifact spirit. It combos well with Doom Foretold, creating plenty of upsides while adding a copy of Sorcerer’s Broom for an additional three mana. It also works with Final Payment, giving you a go-to sacrificial creature each time (for the cost of three mana).

Fueling graveyard shenanigans is Overwhelmed Apprentice. As a one-drop, it puts creatures into your opponent’s graveyard. It also has “Scry 2”, which is a solid ability at any point of a match.