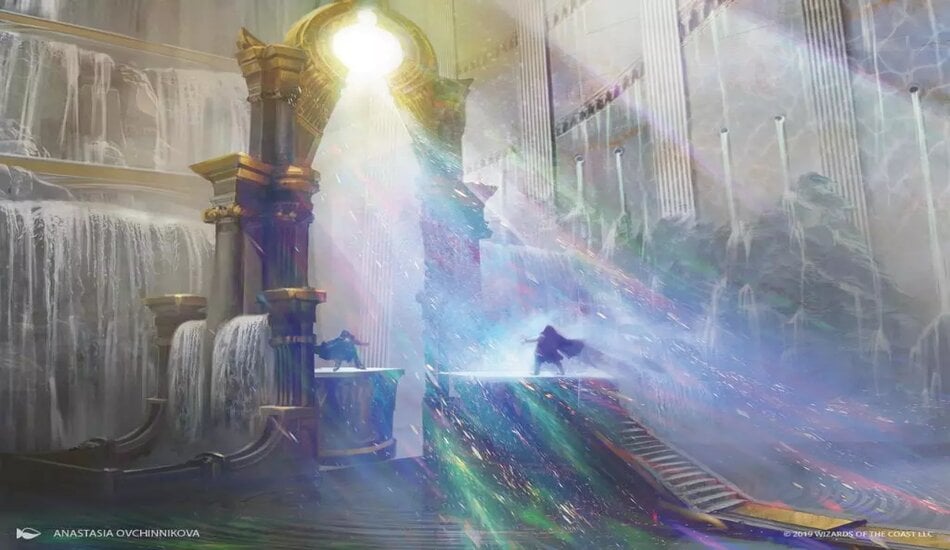 Day four of the Throne of Eldraine spoilers revealed about another 20 Magic: The Gathering spells and creatures, along with a few insights into the set.

Releasing on Oct. 4, and MTG Arena on Sept. 26, the Throne of Eldraine (ELD) set is taking a design push towards mono-colored builds. Confirmed by Andrew Brown today on MTG Weekly, he revealed ELD will be the first Magic set where players can reasonably play mono-colored in the Limited format.

Brown also dropped a bomb, saying there are Mythic Rare Adventure creatures within the set. Despite not seeing them in today’s ELD spoilers, more than 20 creatures and spells were revealed.

A few of the ELD cards are still in foreign languages and have been translated (to the best of our abilities). And don’t forget to read up on the feature Throne of Eldraine spoilers from today.

Elite Headhunter is a part of the four hybrid mana cycle, promoting mono-colored deck building in Standard and Limited. He’s a solid Knight for Limited, and worth sacrificing a Food token to survive being chump blocked by two smaller creatures.

An answer to stopping Feather decks before getting wound up, Fell the Pheasant destroys just about any flyer while providing a Food token as icing on the cake.

Keeping the best-of-one format balanced within MTG Arena, Oakhame Adversary rewards a player when an opponent is playing a similar color. The translation is as follows:

Playing off the theme of balancing best-of-one, Red Cap Brawl moves away from the Burn cards many have gotten used to in Standard. Here’s the translation for this Red Instant:

Providing defense from aggro decks on turn two and dropping a 2/3 flyer on turn three, Ardenvale Tactician is a solid Adventure card in Standard and Limited.

Possibly supporting an Adventure tribal theme, Edgewall Innkeeper has value for its one mana cost. Although, being a 1/1 will likely get it removed from the battlefield quickly.

Supporting the Adventure mechanic, Wandermare provides value and is 3/3 for three. Definitely a solid pick in Limited, and it might see action within Standard too.

Sleeping Beauty is getting bound by a white artifact with Glass Casket. It’s similar to Prison Realm but as an artifact and without the Scry. For Limited, it’s a yes, simply due to its low cost as a removal spell. 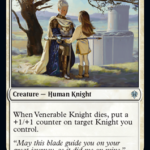 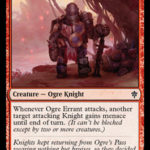 According to Brown, there’s a variety of Knights in each of the colors with similar power levels. Doing this allows players to choose colors first, then Knights to round out the tribal theme.

A four mana for 4/4, Thunderous Snapper is decent (mostly in Limited) but doesn’t feel or look like a Hydra. It’s also designed to fit into the mono-colored deck building theme in Limited.

Losing a limb in battle doesn’t phase the Oathsworn Knight. It’s not a great card, but if combined with the Proliferate mechanic in a Golgari build, this Black Knight could prove beneficial.

Likely one of the most impactful ELD cards so far, Deafening Silence will see plenty of playtime in Standard and other MTG formats like Legacy and Modern. Like Teferi, Time Raveler, it removes an opponent’s advantage. Thrashing Brontodon is a must-have for stompy decks with Enchantments like Deafening Silence as a one-drop.

The big bad wolf is here with Fierce Witchstalker. Four mana for a 4/4 with trample is solid, especially in Limited. It’s a huge unknown what kind of impact Food tokens will have on Standard, but if it does, expect to see Fierce Witchstalker lurking around the corner.

Way to pricey for Standard, but a possible fit in Limited, Wolf’s Quarry creates Food tokens upon tokens dying. It’s a trigger many in the MTG community have been waiting for. Just not at the cost of six mana.