The Magic: The Gathering community is ablaze over the awesome power of a Red Throne of Eldraine spoiler from today called Torbran, Thane of the Red Fell.

With a beard that should have its own card (Instant), Torbran, Thane of Red Fell from the Throne of Eldraine (ELD) set has the MTG community either rejoicing or screaming in agony.

Mono-Red was supposed to take a hit after the Standard rotation, potentially bumping it out of tier-one status. It’s one saving grace was Cavalcade of Calamity from Ravnica Allegiance, but it wasn’t of the same caliber as Red Wins.

With the addition of Torbran from today’s ELD spoilers, Red Cavalcade just received a great four-drop. A red source only has to “deal” damage (not kill) a permanent and Torbran spouts off two more damage toward the target. 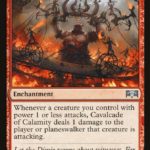 In a Cavalcade Red deck, the idea is to stack the board with 1/1 red creatures. This is accomplished through cards like Scorch Spitter, Tin Street Dodger, and Chandra, Acolyte of Flame. Each time a creature with the power of “one” attacks, Cavalcade of Calamity deals one damage to an opponent’s face. 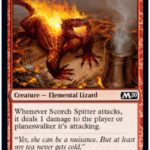 Now add in Torbran on turn four and each power of “one” creature (let’s be modest and say five 1/1 thanks to two elementals from Chandra) essentially get a +2/0 boost toward permanents they’re attacking and each Cavalcade damage (one) earns an opponent two more damage to the face (or planeswalker). Basically, there’s a bunch of math involved and the opponent is dead.

The only downfall to Torbran is he and his beard cost four mana to cast. This was a spot typically occupied by Scampering Scorcher. Torbran is a replacement for sure, but likely with only two copies, unless the meta truly goes bonkers and then there will be four copies and nightmares of Dwarves with elegant beards.

The Throne of Eldraine set releases on Oct. 4 and on Sept. 26 via MTG Arena.