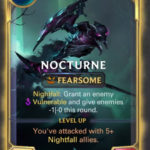 Legends of Runeterra’s card reveal season for the Call of the Mountain expansion has reached its second week. And today, Riot Games introduced the fourth champion from the Shadow Isle region, continuing to build on the Nightfall mechanic.

Nocturne is the champion that Riot unveiled in today’s teasers. He’s a four-mana champion unit wielding 5/3 stats with the Fearsome keyword and a Nightfall ability that allows you to give an enemy unit Vulnerable while reducing the power of all enemy units by one for the round. He reaches his leveled form when you’ve attacked with five Nightfall units this round.

Nocturne’s leveled form is also four mana with +1/+1 in stats and the same keyword and grants other ally units Fearsome. Nocturne’s power reduction ability also upgrades, reducing the power of all enemy units by one whenever you play any unit. This allows you multiple procs and gives your board the potential to dive past the enemy units and go straight for the Nexus if their power is reduced to two or below.

Since Nocturne requires Nightfall cards to attain his leveled form, he needs to rely on as many cards with the shared keyword as he can get. That means the cards revealed yesterday are helpful to his success.

Nocturne’s level up doesn’t need to be on the board while you’re attacking with Nightfall units. That means if you made five attacks with different Nightfall units, you can drop a level two Nocturne onto the board as soon as turn four. Since Nightfall naturally needs multiple cheap cards to play to activate their combo potential, cards that create cheap spell fodder, like the Gem-focused units from Targon, can have potential benefits.

Nocturne will join the champion roster when LoR: Call of the Mountain is officially released for PC and mobile on Aug. 26.