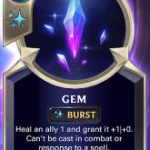 All of these cards interact with a new uncollectible card Gem, which is a one-mana burst spell that heals your ally for one and grants it +1/+0 in stats permanently. It also has a restriction, unlike other burst spells, where it can’t be cast in combat or in response to other spells.

Gift Giver is a one-mana follower unit with 1/2 in stats and an ability that grants you a Gem when summoned. Mountain Goat is a two-mana follower unit with 3/1 in stats that has an effect that creates a Gem in your hand when it successfully Strikes. Mentor of the Stones is a three-mana 1/1 unit with two different abilities. Its first Support ability grants its supported ally a permanent +2/+2 in stats. Its Last Breath ability creates three Gems in your hand. Shards of the Mountain is a slow spell that costs four mana and fills your entire hand with Gems.

The new Gem mechanic brings an interesting way to garner value after combat by recovering your units after battle and giving them extra strength for future fights. Costing one mana apiece to cast, though, it may be tough to weave Gems into your initial curve. Besides casting Gems, they can be used as discard fodder for cards from Piltover & Zaun or Noxus since the abilities that grant them give an abundance of Gems. Gems also serve as cheap spell fodder to help level up the newly-revealed Taric. This even pairs up similarly well with Fizz and Lee Sin based decks.

Gift Giver is a fair one drop enabler. Besides giving you a Gem for future usage, she also pairs with a card revealed yesterday, Tyari the Traveler, by giving him an extra target to support. Mountain Goat is also similar to other cards that gain value upon strike, like Rivershaper and Laurent Chevalier. If the opponent can’t answer it properly, the Mountain Goat can give you multiple Gems after each combat phase.

Mentor of the Stones has poor stats, but its Support ability to grant an ally of your choices +2/+2 in stats during combat and the Last Breath effect that grants you three Gems after its death no matter what give the Mentor a ton of potential for both Gem and Support-focused decks.

Claim the Gems when these cards and more are dropped when LoR: Call of the Mountain officially releases for PC and mobile on Aug. 26.