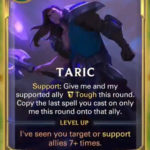 Legends of Runeterra’s Call of the Mountain expansion card reveal season is rolling on today. Riot Games introduced the first champion for the first set of the next expansion, Taric from the Targon region, while also building upon the support mechanic.

Taric is a four-cost champion unit with 2/4 in stats with a Support ability that grants him and his supported ally Tough this round. He also casts a copy of the last spell cast on him onto the supported ally as well. Taric reaches his leveled form when he sees you support or target allies with spells seven times.

Taric’s leveled form is also four-cost with +1/+1 and an upgraded version of his Support ability. The leveled-up version of his effect grants him and his supported ally the ability to be immune to damage and not die for the rest of the round. He also retains his ability to copy the last spell cast on him onto the ally.

Taric and his Support ability synergize well with the previously-revealed Support cards from yesterday. Besides granting him and his ally safety during combat, there’s a lot of combo and tempo potential with his ability to duplicate spells.

Some notable spells that Taric can cast onto his allies are the newly-revealed Blessing of Targon for a lot of permanent stats, Might for massive Overwhelm damage to break through defenses, and Ghost/Sumpwork Maps for a sneaky Elusive breach to bypass enemy defenses. Taric allows players to expand their creativity for combos without sacrificing board control since he can keep your board safe while keeping up the aggression.

Taric will join the champion roster when LoR: Call of the Mountain is officially released for PC and mobile on Aug. 26.