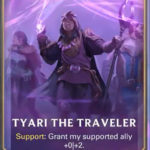 Legends of Runeterra’s card reveal season for Call of the Mountain has officially begun.

Riot Games revealed the first three cards of the expansion today and its newest keyword, Spellshield. Spellshield is a keyword that nullifies the next enemy spell or skill to affect a unit.

Tyari the Traveler, Mountain Sojourner, Arbiter of the Peak, and Bastion were the newest LoR cards revealed. Tyari the Traveler is a two-mana unit with 2/2 in stats and a Support ability that grants its ally +0/+2 in stats permanently. Mountain Sojourner is a five-mana unit with 2/5 in stats with a Support ability that grants its ally +2/+2 in stats. If the Ally its supporting has Support, the +2/+2 chain continues to the next unit. Arbiter of the Peak is a 10-mana 6/6 unit with Overwhelm and an ability that reduces its mana cost by one whenever you’ve either targeted or supported allies in that game. Bastion is a three-mana Burst spell that grants an ally Spellshield for the round.

These cards show off a ton of Support focus for the Targon region. You can get impressive stat leads and early tempo with Tyari the Traveler. Arbiter of the Peak and Mountain Sojourner are also the first cards that beneficially synergize with Support abilities. Bastion, and Spellshield as a whole, is a quick way to negate any shifty spells your opponent can throw at you. Spellshield can give you ways to avoid hard removal, like Vengeance or Ruination, or burst spells that normally can’t be avoided, like Flash Freeze or Harsh Winds.

This set of cards potentially teases Taric being revealed tomorrow. Bastion is a spell that Taric also uses in League of Legends and the teaser says that someone is awaiting these climbing cards at the peak.

Spellshield will be available to obtain when LoR: Call of the Mountain’s first set officially releases for PC and mobile on Aug. 26.