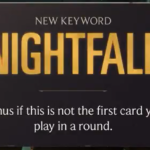 The reveal season for Legends of Runeterra’s second expansion, Call of the Mountain, has entered its third region for card reveals.

Riot Games introduced five new collectible cards from Shadow Isle today alongside a new keyword, Nightfall. Stygian Onlooker, Doombeast, Duskrider, Passage Unearned, and Encroaching Shadows are the newest cards coming to LoR. Nightfall is a keyword that serves as an activatable bonus if it’s not the first card you played in a round. Hearthstone players familiar with the Combo keyword will find familiarity with Nightfall.

Stygian Onlooker is a common one-cost 2/1 unit that has a Nightfall ability that grants it +2/+0 and Fearsome for the round. Doombeast is a common three-cost 3/2 unit with a Nightfall skill that drains the enemy Nexus for three health. Duskrider is a rare five-cost unit with 2/5 stats and a Nightfall ability that grants it +1/+0 for each time you’ve activated Nightfall during the game. Passage Unearned is a rare three-cost Fast Spell that Obliterates all units that were summoned, but not played for the entire round. Encroaching Shadows is an epic four-cost Burst Spell that grants all of your allies in your deck +2/+2 in stats and Ephemeral.

When evaluating cards with Nightfall, their effectiveness with and without the ability is key to judging their potential. Stygian Onlooker is a fairly-statted aggressive creature without Nightfall. But if you’re attacking with this card and you activate this Nightfall ability, sometimes Fearsome is too much to block for certain decks early, making this a threatening card.

Doombeast isn’t too good if you can’t activate its Nightfall ability since it’s only a 3/2 for three mana. But with its skill activated, the fact that it can deal three unavoidable damage (outside of Deny) and heal you for the same amount gives a six health swing in your favor. Duskrider also doesn’t have favorable stats outside of Nightfall, but its Nightfall ability requires your deck to lean into the keyword to get maximum effectiveness out of it. If you can trigger at least three Nightfalls before playing Duskrider, you can get a 5/5 unit, which is a fair compromise—and the stat gain doesn’t stop there.

For players who don’t understand Passage Unearned’s delineation, a card that’s summoned but not played means a card that wasn’t cast spending mana and played from their hand. Passage Unearned is a potent tech card if it can find the right meta to be effective in. If mass minion summoning cards become popular, like The Harrowing and Warmother’s Call, or token strategies in general, then this card can provide immense value. Hilariously on theme, Passage Unearned is also a good card against Thresh’s Level Two ability. the moment Thresh summons a minion with his lantern, the spell will Obliterate the champion that’s arriving. The fact that this card also depicts a lantern breaking makes this counter more on the nose.

Encroaching Shadows is a build-around card that provides an interesting deckbuilding challenge to the user. While +2/+2 in stats is an immense buff the earlier you draw into it, the Ephemeral downside it brings is also something players will have to manage even after playing this card. One way to “circumvent” this weakness is to have your deck feature a supermajority of Ephemeral cards so you’re not adding a new weakness to any of your cards. Encroaching Shadows also allows you to consistently activate Death Mark more since every unit will have an Ephemeral keyword to pass down to your opponent. Another way to make use of this card is to have units that are cheap with aggressive keywords. This is because a lot of tempo is lost for playing this for four mana, but playing cheap units (especially ones with Overwhelm) will allow you to catch up on tempo with your new +2/+2 in stats.

Based on how the reveal season has gone so far, and from inferences based on leaks, today’s preview teases Nocturne for tomorrow.

Claim the night and make your opponents fall with these cards and more when LoR: Call of the Mountain officially releases for PC and mobile on Aug. 26.