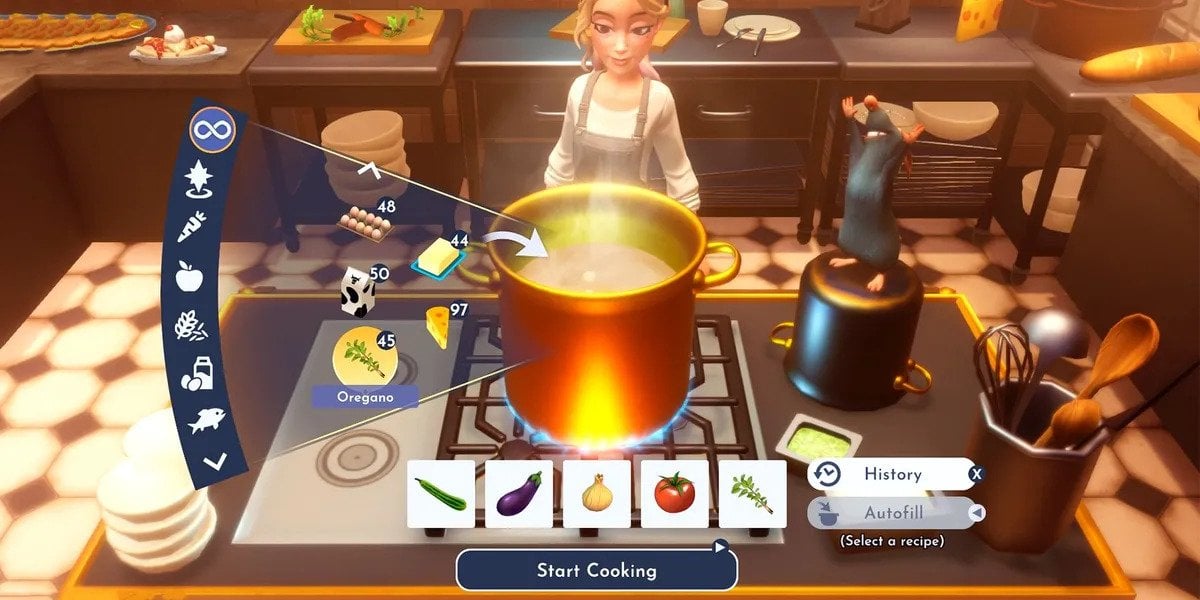 The game includes a lot of classic characters from Disney and Pixar that make their appearance in Dreamlight Valley. Each of these characters acts as NPCs who will give you quests to further the story forward. You can increase your friendship level with these characters to unlock various shops, rewards, and even activities.

One of the activities in this game is cooking. Mixing up different ingredients to make a meal is one of the quickest ways to make money in this game. There are certain things you will need to do before you are able to start cooking in the game, however.

Cooking in Dreamlight Valley is pretty much how cooking works in real life. You find a stove with a pot, you get ingredients, and you cook them together to create your own masterpiece. While not everything you cook might end up being a masterpiece, with over 150 recipes available in the game, it’s not hard to accidentally whip up something that’s edible either.

First off, you will need a stove to cook with. There are three different methods of acquiring a stove in the game:

Regardless of your chosen method to acquire a stove, once you get it, you can begin cooking. The dishes you cook will vary in quality based on the type of ingredients used. You can go all the way from one-star recipes to five-star recipes, with the increased number of stars denoting how much better the dish will be.

To practice cooking, you can start off with some of the simpler recipes the game has to offer. You will then be rewarded with additional recipes as the game progresses through quest rewards or exploration. While it may be fun to craft a vast number of meals, that is not our purpose here today.

These are the best meals the game has to offer. Consuming them offers the highest restorative amount of any meal in the game. If you choose not to consume them, you can sell them too, since each five-star meal sells for a lucrative price, way above what other meals will sell for.

Five-star meals can be divided into three different types:

Each type of meal has a different method of preparation and will require different ingredients. We will be listing every meal of each type down below and tell you what ingredients will be needed to craft those meals as well.

Appetizers are entry-level dishes that are easier to make than the rest. Although they are still five-star, the ingredients are relatively easy to acquire compared to the other types of dishes.

There are a total of three different five-star appetizers you can craft in the game.

Entrees comprise the main course in the game. As such, they are definitely harder to make than the appetizers with some of the ingredients being quite rare.

There are a total of 12 different five-star entrees you can craft in the game.

There are a total of five different five-star desserts you can craft in the game.

These are all of the five-star meals available in Disney Dreamlight Valley so far. With the game still in early access, it is likely that more recipes are going to be introduced from now till the eventual full release of the game.

The developers have already indicated that new features will be added to the game, including new multiplayer features that will be integrated into the game in time. But for now, these are all the highest-tier meals in the game. If there are any changes made to the list, we will keep you updated.