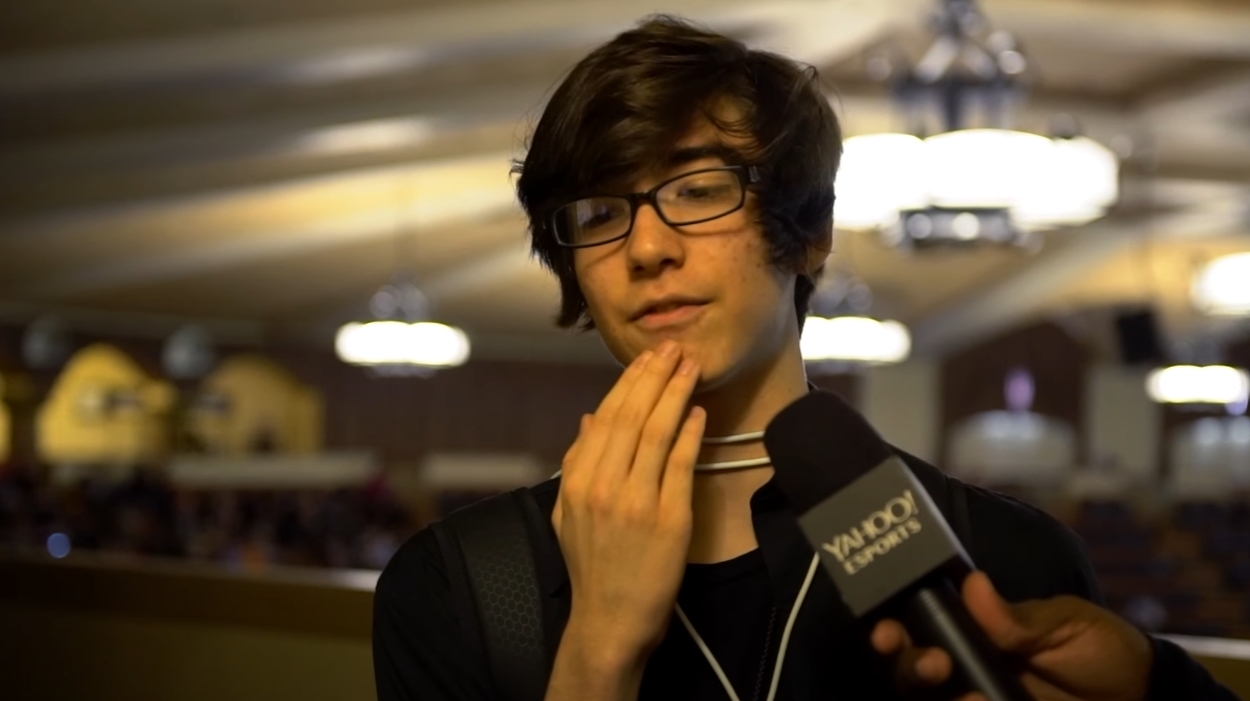 The dust has not yet settled on the Super Smash Bros. community after a summer full of allegations and bans surrounding sexual misconduct and predatory behavior. But now it looks like one specific situation has another layer that’s being pulled back.

Smash pro Tamim Omary came forward yesterday with another perspective on the relationship between two top Smash players, Zack “CaptainZack” Lauth and Nairoby “Nairo” Quezada, in which Quezada allegedly began a sexual relationship with Lauth when he was 20 and Lauth was 15.

In this post, Omary details that when Lauth came out with the “truth” about his relationship with Quezada, it was in consultation with himself, Ezra “Samsora” Morris, and Bharat “Lima” Chintapall, two other top Smash players. And according to Omary’s TwitLonger, Quezada never offered Lauth “hush money.” Instead, it was Lauth who allegedly pressured him for money and lied to cover up his tracks.

In a Discord call between the four Smash players, Morris and Chintapall allegedly pushed for Lauth to come clean with and stop “living a lie,” while Omary wanted him to do what made him “feel most comfortable.” Omary soon left the call before rejoining later after Lauth posted his original take, claiming he made up the rumors of his relationship with Quezada.

During this time, Lauth was allegedly also in a separate call with Quezada discussing how the two were going to handle things, planning their tweets so that they could cover it up further by playing it off as Lauth making things up. This all lines up with what happened in the original telling of Lauth’s side of the story. But when Omary began comparing Lauth’s version of the night in a hotel room with Quezada at CEO Dreamland in 2017, he found some discrepancies.

Omary said that he and Chintapall both heard the same story from Lauth, but the version of the story detailed in Lauth’s TwitLonger through a conversation with Saleem “Salem” Young was very different. According to Omary, Lauth was the one who initiated the relationship with Quezada by climbing into his bed in the middle of the night and caressing his chest before “taking things further.”

After detailing the differences in what was written and what he heard, Omary said Lauth had “an obsession with talking about how much money Nairo made” and would use that to justify asking for money. He said that the $2,000 mentioned in the TwitLonger as “hush money” was actually paid out because Lauth pressured Quezada after losing his sponsorship with Polar Ace last August.

“I know that Nairo did not offer Zack ‘hush money,’” Omary said. “Zack definitely asked for the money. For the following situations after the $2,000 where Nairo had sent money, it was because of Zack, yet again approaching Nairo. However, in Zack’s TwitLonger, he implied that Nairo had given him money to stay ‘Quiet.’ This was NOT the case.”

Omary explained how Lauth went as far as to fake cry on his stream about “bribe money” and said that it was nothing like any of the times he had seen him cry prior to that.

“Zack is going to lengths to push the innocent narrative he created for himself because it is the only thing keeping the public on his side,” Omary said. “It is very ironic how the entire motive and title of Zack’s post ‘I’m Tired of Living a Life of Lies’ is built on himself lying, multiple times, once again.”

He closed the portion on Lauth by saying that he’s in no way defending Quezada, but was a longtime friend of his and knows that he’s a “sneaky and devious person” who “constantly bragged about the men he had romanced and puppeteered.”

Omary even went as far as to say Lauth openly admitted to being purposefully manipulative when his other underaged relationship with former Smash pro Elliot “Ally” Carroza-Oyarce was ongoing, saying that Lauth “was not scared of people finding out because he would not be the one at fault due to him being the minor.”

“Zack had aggressively attempted to seduce countless adults in the Smash community and had been told many times by his friends to stop this nefarious act,” Omary said. “There is a clear difference between making innocent mistakes in contrast to unapologetically continuing to pursue immoral actions. Zack viewed these people’s lives and careers as toys and destroyed them without remorse when an opportunity arose.”

As for the remainder of the post, Omary pointed out Morris’ complacency and manipulation in the CaptainZack saga that’s ongoing, dating all the way back to March 2019 in the middle of the fallout with Carroza-Oyarce.

According to Omary, Morris knew about Lauth’s relationship with Carroza-Oyarce the entire time and did nothing, even going as far as to compete in doubles with him at events. Omary pointed out that Morris said nothing when Omary’s initial post about that relationship came out and he was “crucified for speaking the truth.”

Omary claims Morris never cared until it came to Quezada, who he was constantly compared to both in competitive play and in streaming. Morris was living in the shadow of Quezada, who was one of the biggest Smash content creators, and “wanted to eliminate his competition,” according to Omary.

Omary even provided screengrabs from what appears to be a private Twitter account run by Morris that reference how “degrading” he found being constantly compared to Quezada was. Those were followed by text logs from Chintapall, showing Morris admit that it was “not about abuse” and that Quezada wasn’t a predator while also talking about how Lauth was lying and “only cared about his coin.”

“Samsora wanted to eliminate Nairo as his competition under the guise of helping Zack speak his truth,” Omary said. “Samsora (along with Zack) used a movement that is meant to help victims, primarily to benefit himself. Basically, Samsora weaponized Zack’s story for his own personal gain.”

Morris responded the next day, denying all of Tamim’s claims and saying that he never once weaponized Zack’s story.

“I never wanted to eliminate Nairo, my best friend, from my life or “competition” as [Omary] says,” Morris said. “All I ever wanted was to see Zack grow as a person and to be freed from his shackles and it was always about that and the truth. Never once did I tell Zack that he needed to make a statement, but to do what he felt is right. I did say that I will always stand beside him in the truth, but never in a lie.”

He does, however, back up some of Tamim’s points, though he also mentioned that Quezada and Lauth approached him in 2019 to help keep the details regarding their 2017 interactions quiet while trying to talk to Tamim and “make sure they think that the situation was different from Ally and Zack.” Morris says Quezada would bring up how the interaction getting out would ruin his reputation and relationship with his family at “just about every tourney.”

According to Morris, Lauth and Quezada met up at Evo 2019 when the initial information of Lauth blackmailing Carroza-Oyarce into throwing games while they were in a relationship brought the rumors of the pair’s relationship back into the spotlight. Morris was present during the meeting and Lauth and Quezada made up a cover story in case their actions did come out, so that they could get off of it lightly.

Morris says he was never comfortable with lying to that many people, but he felt that there were bad no intentions between Lauth and Quezada, so he never mentioned it.

After that, Morris says that things died down, though Quezada would still constantly mention how the situation was “different than Ally and Zack.” That is until Kongo Saga in December 2019, where Quezada allegedly got a tip that Carroza-Oyarce was going to come out with information about Quezada’s relationship with Lauth.

Quezada allegedly reached out to Carroza-Oyarce, telling him that any information he had about Lauth being involved with him was nothing but rumors and threatened to sue for defamation. Nothing happened after that, but Morris says that Quezada became much more persistent in making sure both he and Lauth were okay with their fabricated story if things did need to come out.

On July 1, when Lauth made his original tweet about fabricating the Quezada situation, Morris said he reached out to Lauth to tell him he was “living a life of lies again just like with the Ally situation.” Lauth allegedly opened up to Morris about how he never wanted to lie for Quezada and that was where Morris started pushing Lauth to tell the truth, even if it would impact one of his closest friend’s careers.

Morris also notes that he was never about “canceling” Nairo and that all of the things Tamim shared in his post were about “seeing Zack’s growth as a person” without condoning Lauth, Carroza-Oyarce, or Quezada’s actions.

“So many people are saying that Zack and I did this for personal gain, but it was never the situation,” Morris said. “I feel so devastated because Nairo was one of the closest people to me and he feels betrayed by what I’ve done. It was never about canceling Nairo, it was always about breaking Zack from his shackles.”

Morris also mentioned he talked with Quezada after the allegations came out and Lauth’s final TwitLonger on the situation revealed the “whole story.” According to Morris, Quezada confirmed what Tamim mentioned earlier, that Lauth was in fact the one that made advances on him while he was sleeping, calling Lauth’s post was a lie.

And while he pushed back against all of Tamim’s claims that he was “abusing and manipulating the truth,” pushing Lauth and Chintapall to do things for the wrong reasons, and being complacent in Lauth’s relationships with older men, he also apologized for withholding this information for so long.

“I do deeply want to apologize for not saying any of this information prior,” Morris said. “It was me who made the poor judgment on the entirety of the situation and I will gladly accept the consequences. I am not asking for forgiveness, I wanted you guys to know the full truth. I could have been a better friend and role model in the Smash community and I will learn from my mistakes for this to never happen again.”