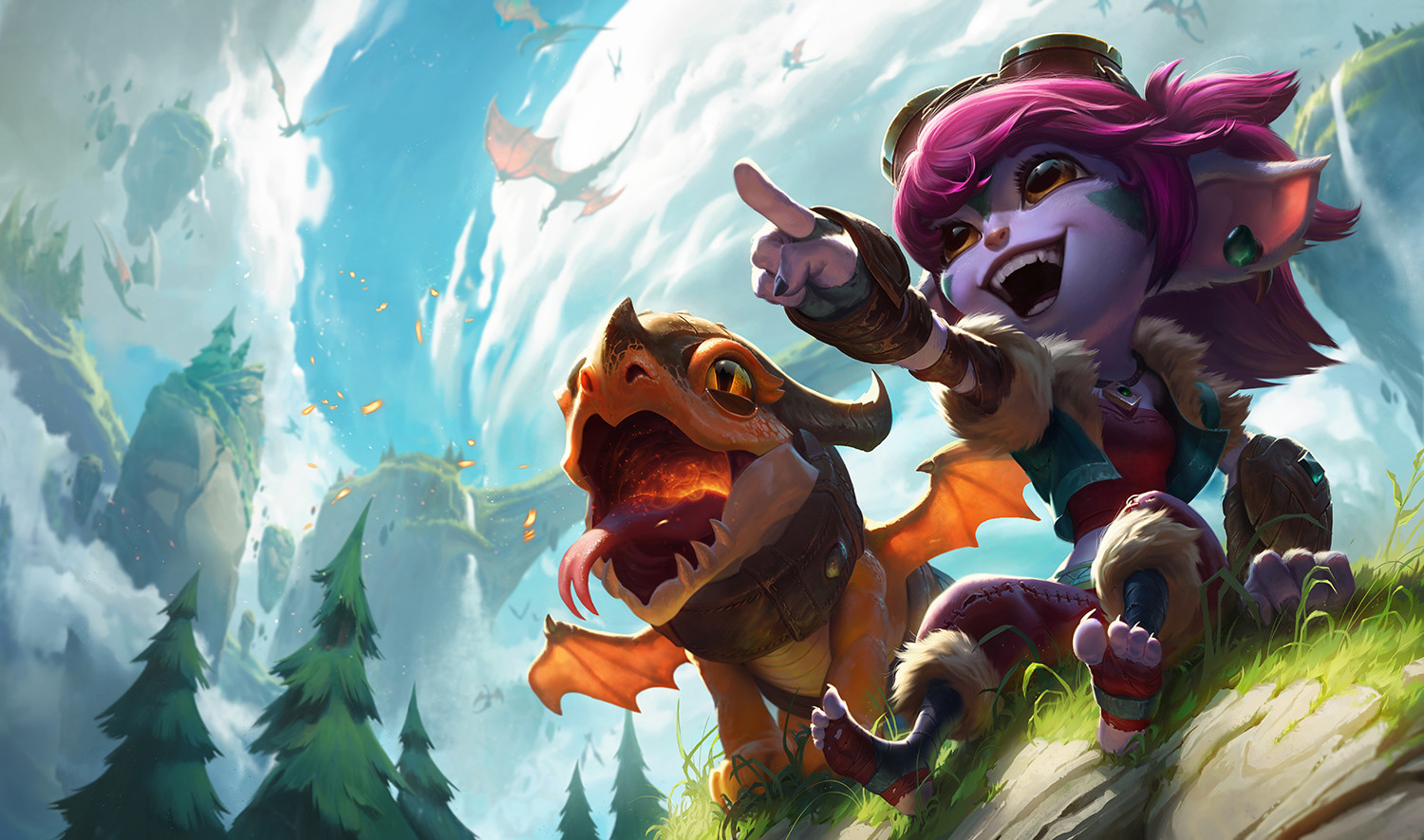 The Trainer origin is a newcomer to Teamfight Tactics, released in Set Seven Dragonlands, and is a kind of revamp for the Set Two Summoner trait. It brings players a way to summon a little Gromp-style dragon that starts squishy but can turn into a tanky monster, burning multiple targets in the enemy backline.

Heimerdinger is the tier one unit of the trait. He has the Trainer and Mage features. His skill is Egg Toss, which sees Heimerdinger lob an egg at the highest health enemy, dealing magic damage and stunning them.

Tristana is the tier two unit. She has Trainer and Cannoneer features. Her ability is Explosive Charge, which causes Tristana to fire up to three explosive charges, prioritizing the closest targets without a charge. Charges detonate after three seconds, dealing physical damage to nearby enemies and bonus magic damage to the target.

Lulu is the tier three unit. She possesses the Trainer, Mystic, and Evoker traits. Her ability is Whimsy, which causes Lulu to enchant the nearest targets. Enchanted allies gain attack speed ​​for 1.5 seconds. Enchanted enemies are stunned and transformed into harmless dragonlings, taking increased damage while stunned. If there are fewer than three units nearby, Lulu will enchant herself.

Nomsy is the Origin Trainer’s unique unit in Dragonlands. Its ability is Fireball, which causes Nomsy to breathe fire toward its target, dealing magic damage to enemies hit and burning them for one-percent maximum health true damage per second for eight seconds. The Snax does not count as an item and Augments like Makeshift Armor further increase Nomsy stats.

How to build Trainer compositions

The main way to build a Trainer comp involves deciding to use two or three Trainers, with the possibility of a reroll comp to achieve three stars on all Trainers. Two Trainers are enough to grant Nomsy, an extra unit on the field that at the end of the game can be a good tank with the burning effect of the Morellonomicon item with each activation of its ability. But three Trainers can feed Nomsy much faster, causing it to reach even higher power levels—each Snax increases its Life and Ability Power. It can reach up to four stars and even after that, each Snax keeps increasing its stats infinitely. Getting lots of Trainer units in the early rounds and good attack damage items can be an opportunity to attempt a reroll comp, in which case Tristana is a good candidate for a main carry via the Cannoneer trait activation.

The beginning of the game is simple: activate the Trainer trait as quickly as possible while looking for a frontline unit. It will take time before Nomsy can tank. Sejuani is one of the best early-game tank units, activating the Guild trait grants bonus health to the entire board. Other options are Skarner, which might be good enough if it achieves two stars. Tahm Kench is a unit that can be very useful if the composition has a Tristana carry. The combination of Cannoneers Tristana, Jinx, and Corki brings the possibility of activating the synergy of Revel with Tahm Kench for extra damage. A couple of Guardian units like Taric and Leona can also help. Throughout the game, a unit that can tank must be considered and replaced accordingly. Shen is a good mid-game option for his ability to dodge attacks. He can be placed next to Nomsy to increase his survivability. Toward the end of the game, the best picks will be Ornn, who contributes a lot of crowd control and tanking very well, and a tank dragon like Idas.

Ability power items make it possible to use Heimerdinger’s Mage synergy and choose a main AP carry like Ryze that also uses the Guild trait bonus to complement the board. The best items for Ryze would be the Blue Buff, Rabadon’s Deathcap, and the Jeweled Gauntlet. But a Trainer comp is much more powerful with an AD loader. Tristana, Jinx, and Corki are the best options. They all use attack speed items like Guinsoo or Statikk that make it easy to activate the Cannoneer effect, as well as AD items like Infinity Edge and Last Whisper. A defensive item can also make a difference on your carry. In lobbies with a lot of CC, the best choice is Quicksilver. If the problem is dealing with damage, choose Bloodthirster.

Since the Trainer trait does not naturally have full tanks, the best options when it comes to the Set Seven Dragonlands Dragons are those that have the best capabilities to allow carries to deal damage. The Dragons take up two spaces on the board, similar to the Colossus trait in Gizmos and Gadgets. In addition, Dragons also plus-three a marked trait and gain 600 bonus health. They are doubled in cost when they appear in the store and are great additions to many different compositions.

In the case of the Trainers, there are two dragons that are the best choices. Idas is a tier-four dragon with the Shimmerscale and Guardian traits and with the Golden Scales ability that is able to reduce damage, as well as heal and grant shield and attack speed to allies, making this dragon one of the best tanks for your Trainers. As a bonus for activating the Shimmerscale trait, the player receives one of the trait’s special items. Shi Oh Yu is another good tier-four dragon option with Jade and Mystic traits. Her Jade Rush ability grants her damage reduction and crowd control resistance, as well as causing CC on the enemy team. Activating the Jade feature brings a Jade statue to the board that strengthens your backline while still acting as a dummy for enemies before they reach your carries.

The Trainer trait may not be powerful on its own to guarantee a win at higher levels of play, but it does have a strong start and can easily transition to some comps that will make it to the top four thanks to the extra unit on the field, Nomsy, which scales infinitely throughout the game, and the presence of Lulu, one of the best utility units in the Set Seven.

A simple composition that works is using Corki as the main carry and receiving the bonuses of the Cannoneer and Revel traits. For the composition to work, it is necessary to guarantee good items in Corki, and a start by activating the Trainer trait can help maintain Health in the early stages.

Priority for the first carousel is B.F. Sword followed by Sparring Gloves.

With a strong board, it is possible to level up to four before the first PvP round and try to follow up with a winning streak. Otherwise, a losing streak can help keep the economy going. The best units at the beginning are the low-cost Trainers and Revels like Heimerdinger, who can be traded in the future for Lulu, Tristana, Jinx, and Tahm Kench. They form a good frontline as your Cannoneers start dealing damage.

Level up to six in round 3-2. More Cannoneers can be added to the board and Lulu can also be kept with the other Trainers until Idas appears and can be put in place of Tahm Kench and Heimerdinger.

Level up to seven in round 4-1 and try to stabilize the composition. After that, save gold to reach level eight and finish the composition. When Idas is added to the board, its Shimmerscale trait will be activated and an item will be awarded. This item is different in each game, so it’s up to the player to use it in the best way to get more gold for the final pieces. All Shimmerscale items have some relation to the economy and have different ways of being used.

Idas should receive the best tank items available and Tahm Kench can carry them for her. The best items for Corki are Guinsoo’s Rageblade, Infinity Edge, and Bloodthirster, and both Jinx and Senna can carry them for him. The best Augments for this composition are those related to the Cannoneer trait: Cannoneer Crown, Ricochet, and Hot Shot.

The idea behind this composition and its strength is to make Aurelion Sol a mage so his Black Hole ability scales twice as fast, dealing a lot of damage to the enemy team. That’s why it only works with a spatula or an Augment that directly grants an Emblem or another spatula like the Mage Crest and Urf Grab Bag.

With this comp in mind, it’s important to level up quickly to find stronger mages in the shop and be able to use traits more efficiently early in the game. The best options are Mages and Trainers, especially finding a Lulu, or Mages and Bruisers with a Sylas. Vlad can also fill the third Mage slot, but a Ryze might be more efficient at holding items for Aurelion Sol.

For the mid game, the idea is to keep the strategy with more Mages. The other units remain mostly frontline Bruisers like Sylas and Ornn and support units like Lulu and Nami. Level up to six in round 3-2 and build the best board you can. Keep yourself with 50 gold while leveling up to seven.

Ideally, be at level eight before the end of stage four. From there, the comp needs to be with Aurelion Sol for the late game. It is possible to trade a Mage for Zoe and use her as a second carry. But try to keep Heimerdinger to keep Nomsy on the board. Upon reaching level nine, your team will be complete. The best items for Aurelion Sol besides the Mage Emblem are Hextech Gunblade and Archangel’s Staff. Tank items must be placed on Sylas or Ornn, whichever reaches two stars first.

This is a powerful and versatile comp. You can easily change it to use six Astrals with Vladimir and Nami or seven Mages to make use of a lot of AP items to fully equip two carries.