Released in 2018, Among Us quickly became one of the top party games of that summer. Though it offers an easy-to-learn gameplay experience and is a lot of fun with friends, it took influencers and popular streamers to notice the game for it to achieve new highs. While it’s been four years since its release, the game is still a fun party game to play with friends.

While a surge of new players is a breath of fresh air for the game’s pre-existing community, it can also cause server problems, especially for indie games. Despite the connectivity issues that Among Us had to endure during its early run to the top, the demand for the game would still increase, and Mac users have been left on the sidelines since the game doesn’t officially support the platform.

Among Us is currently available on Windows PCs through Steam and the Epic Games Store. It can also be played on mobile platforms, PlayStation, Xbox, and Switch. Despite being available on Apple’s mobile operating system, Among Us isn’t available on Mac computers, but Mac owners aren’t without options.

Two ways to install and play Among Us on a Mac

Normally, the most common way of running unsupported games on Mac OS devices is installing Windows, which also defeats the whole purpose of owning a Mac. Among Us being available on mobile platforms gives a second out to players with fewer hoops to jump through.

1) Play Among Us via an Android emulator

Among Us is available on Google’s Play Store, meaning it can also run on Android emulators. These programs basically emulate an Android phone or tablet on your Mac while using your internal’s power. Not only will you be able to run Among Us via this method, but you’ll also be able to play it a lot smoother than you would on a mobile device.

Any Android emulator that has a Mac client will do the trick here, but we decided to go with Bluestacks for testing purposes. Download the emulator through its official website and go through the standard installation procedure. Your Mac can verify the emulator you’re installing multiple times during the process since emulators tend to install a couple of essential software frameworks that allow the emulator function properly. 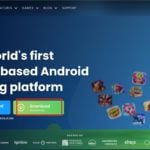 Once you’re done installing the emulator, you’ll need to create a Google account if you don’t have one already. Type in your credentials to log onto your Google account, and you’ll be navigated to the home screen of your emulator after answering a couple of questions from Google. After the login process, make your way to the Google Play Store and search for Among Us. You’ll need to install the game from here by clicking on “install” and letting Android do its magic.

Close the Play Store from the top panel once Among Us successfully gets installed to see its icon on the main screen. Clicking on Among Us will launch the game and you’ll be prompted with a set of controls that are also customizable. The keyboard controls are identical to the PC version of the game, and you should find yourself in the main menu of the game while all of this is happening.

Click on online to host or join a match. Don’t forget to name your character before hopping in. You won’t be able to carry your progress to the PC version since it’ll be tied to your Google account at this point.

Mac OS is a clean software experience, but it’s definitely not the best option for a gamer due to compatibility issues. It’s relatively easy to install Windows on a Mac, however, which allows users to install all the programs that they couldn’t, including games.

You’ll use the included “Boot Camp Assistant” to do this and the progress is relatively straightforward if you follow all the steps carefully. 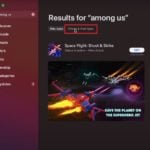 M1 Macs were designed in a way that they could run iPad apps without any problems. It required some effort from the developer’s part, however, meaning fans had to wait for their favorite app developers to fine-tune their applications for Mac usage to avoid compatibility issues.

Among Us fans on M1 Macs had to rely on other ways in our list to play the game, but they don’t have to anymore. As of now, M1 device owners will have the easiest time when it comes to setting up Among Us on their system.

The process will be the same for M1 Pro/Max Mac owners since the chipsets feature the same characteristics as the regular M1. You’ll still be able to download iPad/iOS apps, allowing you to natively install Among Us on your Mac.

Though the Boot Camp method brings more utility to the table since you’ll be able to run other Windows programs, we recommend the Android emulation way if you don’t need Windows on your Mac aside from playing Among Us.

The emulation method is quicker, and you can easily uninstall it if you decide to move on, while the Windows method will be trickier to get rid of if you haven’t done anything similar before.