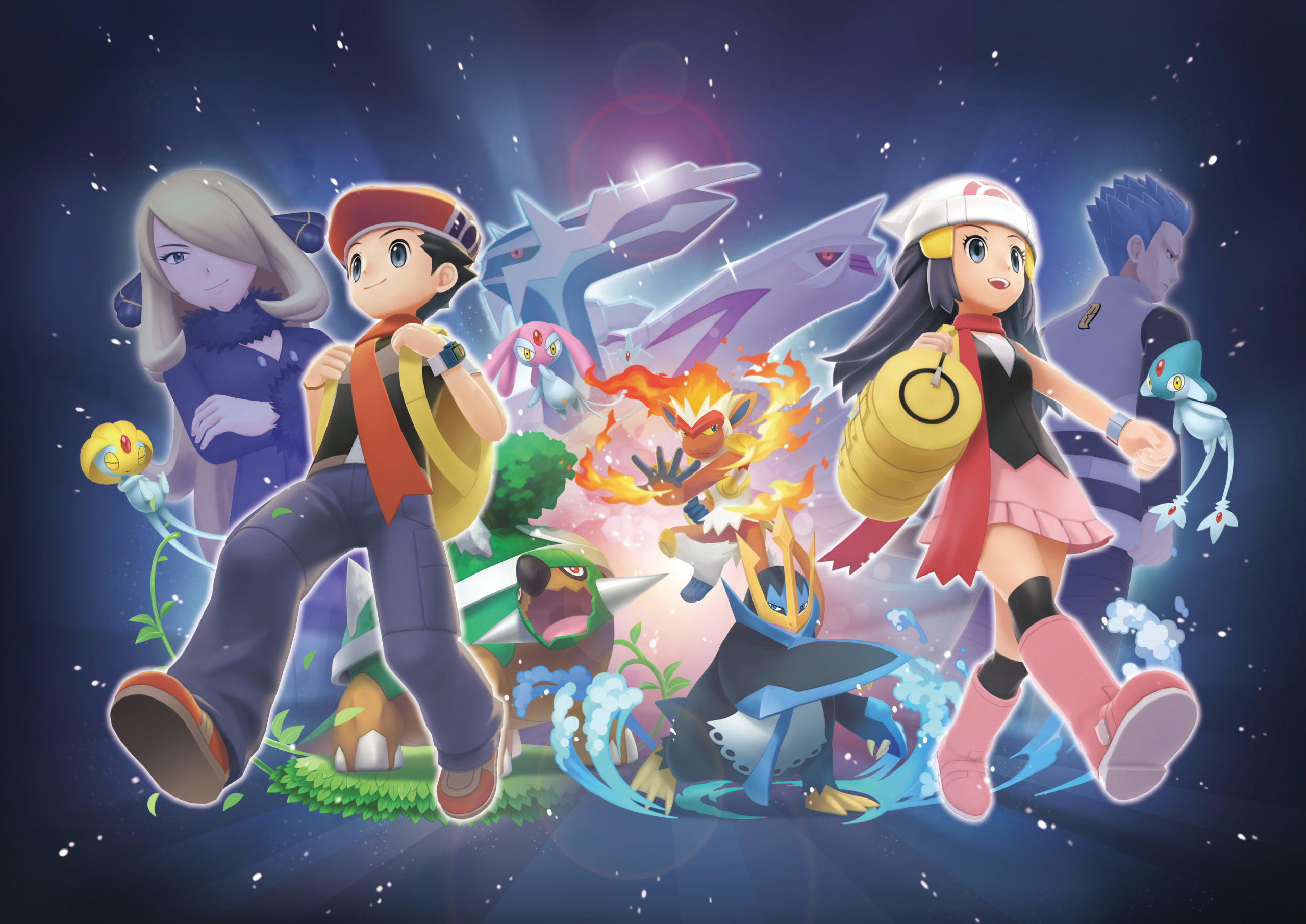 Cynthia has a reputation for being one of the hardest Pokémon League Champion fights across all of the main series Pokémon games—and her appearance in Brilliant Diamond and Shining Pearl is no exception. Her team is composed of all the Pokémon she had in the original Diamond and Pearl, but they’ve got new moves and held items that take them to the next level.

If you’re having trouble reaching the post-game, we’ve compiled a guide on how to defeat each of Cynthia’s Pokémon and become Sinnoh’s next Champion. Here’s how to make sure you win.

Roserade is one of Cynthia’s easier Pokémon to take out. A good Fire or Ice-type will be able to roast this Grass and Poison-type without a second glance, particularly if they’ve raised their stats with an item or move beforehand. Roserade knows a wide variety of moves to take advantage of STAB and to cover its weaknesses, but there’s really nothing it can do against a Fire and Fighting-type like Infernape. Flying-types like Staraptor are also viable. Though it might be tempting to use a Psychic-type like Alakazam to take advantage of Roserade’s Poison typing, they’ll get wiped out by Shadow Ball.

Using Infernape or Rapidash, Brilliant Diamond and Shining Pearl’s only other native Fire-types, will also nullify the Expert Belt that Roserade is holding. The Expert Belt increases the power of super-effective moves. This means that if Roserade has no moves that are super effective on your Pokemon, the Expert Belt becomes worthless. For extra cover, have your Pokémon hold a Pecha Berry or stock up on Full Restores to heal from any poison that might be caused by Sludge Bomb or Roserade’s Poison Point ability.

Gastrodon might seem like an easy target with its quadruple weakness to Grass, but don’t let that lull you into a false sense of security—it has no problem erasing Grass-types with Sludge Bomb. Gastrodon is also something of a tank thanks to its Leftovers item, which restores a little HP each turn, and its Storm Drain ability, which nullifies all Water-type attacks directed at it. Electric-type attacks won’t work here either since Gastrodon’s Ground typing absorbs those, too.

The best way to go about defeating Gastrodon is to play the long game. A Grass and Poison-type status inflictor like Roserade is a good way to outlast Gastrodon. While Cynthia might be able to heal status conditions with Full Restores, a Pokémon with Toxic can just poison Gastrodon over and over again. (Pure Poison-types should watch out for Earthquake, though.) A Roserade’s strong Grass-type moves can deal a lot of damage to Gastrodon and its dual typing means it doesn’t have to worry about Sludge Bomb. Gastrodon will likely take a while to defeat, so play it slow and be patient.

While the same Grass and Poison-type you used to deal with Gastrodon might seem like a good idea against Milotic, watch out: It can take out Grass-types easily with Ice Beam. Milotic also starts the round with an automatic stat boost thanks to the combination of its Flame Orb held item and the ability Marvel Scale. Flame Orb burns any non-Fire-type Pokémon that holds it and Marvel Scale raises Milotic’s Defense by 50 percent when it has a status condition. Combined with the annoying HP-restoring move Recover, Milotic really doesn’t have to worry about burn damage and can instead reap the benefits of Marvel Scale.

This might make you think that you can simply bypass Milotic’s heightened Defense with Special moves, but this slippery Pokémon also knows Mirror Coat, which will knock back any damage from Special moves. The best way to take on Milotic is to use an Electric-type with Physical Electric moves, like a Luxray with Thunder Fang. Another possibility is to use a Dark-type with strong Special attacks since Dark-types are immune to the Psychic-type Mirror Coat. Hit hard and hit fast: Trying to take out Milotic by chipping away at its health will inevitably cause frustration when it uses Recover or Cynthia pulls out a Full Restore.

Lucario is a nasty combo-based Special fighter to face. Its Nasty Plot move enables it to raise its Special Attack sharply each turn and the Wise Glasses it’s holding raise the power of its Special moves even further. It knows a wide variety of moves to counter your team, including Dragon Pulse, an unusual move for a Fighting and Steel-type.

Any Pokémon on your team that has outstanding Special Defense can put up a wall against Lucario. Options include Infernape and Rapidash, who can lay down some hurt with their Fire-type moves, and a non-Rock Ground-type like Gastrodon that won’t take extra damage from Aura Sphere or Flash Cannon. Machamp is also a possibility: While it doesn’t have an especially high Special Defense, it can blast Lucario with strong Fighting-type moves.

Because of the way Nasty Plot works, Lucario will likely use that move first unless it detects that it can use a super-effective move against your current Pokémon. Nasty Plot doesn’t deal damage, so if you can come out swinging with a strong, fast Fighting, Ground, or Fire-type move, you can potentially take out Lucario before he can get too many hits in.

Garchomp is one of Cynthia’s hardest Pokémon to face—and for good reason. Champions have a long history of using Dragon-types thanks to their high stats, powerful moves, and frequently pseudo-Legendary status. While Cynthia doesn’t have the full Dragon team of someone like Lance, Garchomp is dangerous enough on its own with its suite of strong moves and difficult typing. Garchomp is weak to Dragon-type moves and even more so to Ice-type moves, which deal a full quadruple damage. The Yache Berry it holds means that it takes only half the usual super-effective damage from the first Ice-type move that hits it, which somewhat negates this big weakness, at least initially.

A Pokémon with strong Ice-type moves and a high Defense will do well against Garchomp. The Dragon and Ground-type is the only one of Cynthia’s Pokémon that uses primarily Physical moves, so you’ll want to keep your Special Defense powerhouse on the backline while facing it. Though the Grass and Ice-type Abomasnow could falter in the face of Garchomp’s Poison Jab, it’s still worth having on your team for moves like Blizzard. Mamoswine and Weavile, though harder to find, fulfill the same role but without the weakness to Poison.

As an alternative, many non-Dragon-type Pokémon can also learn Dragon-type moves, which negates the potential super-effective damage from Garchomp’s Dragon Claw. But these non-Dragon-types won’t receive STAB for the attack, so it won’t be quite as effective. Your best bet is to try and outlast the Yache Berry’s initial resistance to Ice-type attacks to break through to that quadruple weakness.

Spiritomb is almost certainly the toughest Pokémon on Cynthia’s roster. While none of her Pokémon are necessarily easy to fight, Spiritomb stands out as the most difficult thanks to its unusual typing: Ghost and Dark. There’s only one other Pokémon in the series that shares this type combination—and for good reason. The dual Ghost and Dark-type means that Spiritomb has no type weaknesses. There are no moves that are super effective against it, much less grant that coveted quadruple damage like Ice-type moves do with Garchomp. Spiritomb is also holding a Sitrus Berry, meaning that the first time its health drops below half, Cynthia might not even have to spend a turn using a Full Restore.

Spiritomb doesn’t mess around with stat-raising moves or complicated strategies. It simply hits hard in a variety of types. Though most of its moves are of the Special variety, don’t discount its nasty Physical potential with Sucker Punch. Without the use of super-effective moves at your disposal, your best bet is to hit Spiritomb with your highest-damage moves as quickly as possible. Its Pressure ability means that you have even less PP available for these moves than usual, so fight smart.

If you chose Chimchar as your starter, avoid using Infernape, or any Fighting-type, in this matchup: Spiritomb’s Psychic will destroy it instantly. Normal-types may have a small amount of resistance against its Shadow Ball, but they won’t be able to use their Normal-type moves on it. Even if they have non-Normal-type moves, they won’t receive STAB, robbing you of that small amount of additional damage potential. It’s not a great idea to try and tank against Spiritomb, either: Thanks to its lack of support or stat-adjusting moves, it can’t do anything but damage you each turn, which will wear down even the hardiest of tanks.

While Steel-types don’t have a lot of STAB-capable offensive moves at their disposal, they do have a type resistance to all of Spiritomb’s moves. Try tossing out a Scizor or Steelix to at least stall while you heal your other Pokemon. Use some of the game’s strongest moves, like Flamethrower, Giga Drain, and Hydro Pump, against Spiritomb to wear down its HP and be prepared to spend at least a few turns healing. You can also try employing combos and tricks of your own with held items and move combinations to get the upper hand. Finally, while it might seem obvious, it’s still worth mentioning that you can always grind out a few more levels in Victory Road to have a small boost in power over Cynthia.