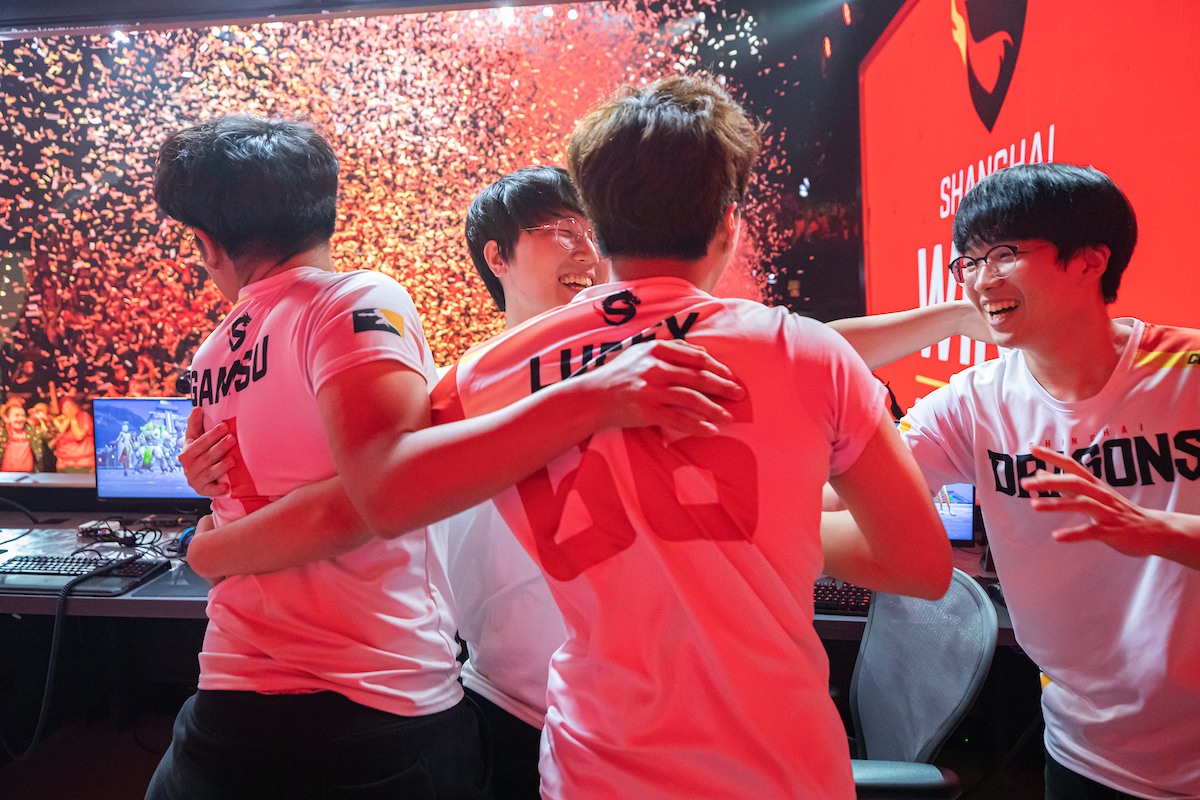 The Overwatch League’s final monthly tournament concluded today and two teams went home with prizes, glory, and bragging rights. For fans who have followed the entire 2020 season, the Countdown Cup’s results may feel a bit like déjà vu. The Shanghai Dragons took the Asia region’s championship and the San Francisco Shock nabbed North America’s title, mirroring the results from the May Melee tournament.

Though the end result of the tournament may have felt like an absolute given, both teams had to fight through multiple rounds to take their championship titles.

Despite New York’s relative success over the past few weeks of the Countdown Cup qualifiers, they were no match for the Shanghai Dragons. Excelsior Genji specialist Kim “Haksal” Hyo-jong did his best to stand up to the Dragons’ dominance, but was often cut down by Shanghai’s MVP candidate, Kim “Fleta” Byung-sun. Shanghai DPS Lee “LIP” Jae-won also played a convincing Sombra, sneaking into New York’s backline to destroy the team’s semifinal dreams.

The Chengdu Hunters have had a monumental run through the Countdown Cup, coming alive in a meta that’s often fueled by quick, chaotic decisions. This time around, however, the steady calculations of the Hangzhou Spark came out on top. Park “Architect” Min-ho, Genji expert for the Spark, sliced through the Hunters’ attempts at quick point takes. Many maps were competitive, and the Hunters took a surprise Hanamura win, but the Spark wanted their shot at the finals.

Normally, Grand Finals in the Asia-Pacific (APAC) region are back-and-forth, composed entirely of drawn-out smack-downs and traded maps. This time around, the Shanghai Dragons wanted to earn the championship in record time. With a 4-0 sweep, the Dragons demolished the Hangzhou Spark and easily earned their second monthly tournament win.

Shanghai’s MVP candidates, DPS Fleta and off-tank Kang “Void” Jung-woo, proved without a doubt why they made the prestigious award’s shortlist. Void, alongside main tank Lee “Fearless” Eui-seok, repeatedly shut down Hangzhou’s attempts to make space. While Shanghai’s support line also had an impressive showing, Fleta was arguably the star of the show. By digging deep into his hero pools, he reminded fans why the Fleta Deadlift statistic exists.

In a match that was closer than the San Francisco Shock would have liked, the Florida Mayhem capitalized on rare mistakes from the 2019 Overwatch League champions. On first map Busan, San Francisco looked cluttered and confused, dropping the map to Florida. At the beginning of Eichenwalde, Shock played a questionable Sombra composition until the team learned to rely on Lee “ANS” Seon-chang’s Ashe play.

The remainder of the match felt like an epic hitscan battle between ANS and Lee “BQB” Sang-bum of the Florida Mayhem. Once the Shock warmed up, however, the team’s usual level of dominance came back out. DPS Kim “Rascal” Dong-jun brought his previously lukewarm Genji back out on Hanamura, securing easy holds for the Shock and concluding the series.

Of all the teams in the semifinals, the Philadelphia Fusion seemed the most awake and motivated to dive into the Countdown Cup games. The team looked lost against the Paris Eternal during map one, Nepal, and fans were concerned that the confusion would last. Philadelphia proved everyone wrong with a mind-blowing attack round on Numbani. MVP candidate Kim “Alarm” Kyeong-bo hit so many clutch sleep darts for Philadelphia that casters could barely keep up.

As the teams moved to Hanamura, other members of the Philadelphia roster seemed to come alive. DPS Lee “Ivy” Seung-hyun brought out his Genji for the Fusion, taking advantage of more clutch plays from Alarm. On the final map, Havana, the Paris Eternal seemed completely lost, and Philadelphia took full advantage of their confusion.

Since the early weeks of the 2020 Overwatch League season, fans have been waiting for a truly competitive showdown between the San Francisco Shock and Philadelphia Fusion. Though the teams faced off once earlier in the season, an unfavorable meta led to an early Fusion defeat. This time around, both teams have excelled in fast, calculated compositions.

Philadelphia kicked off the Countdown Cup Grand Finals with a win on Busan, relying on hitscan Jeong “Heesu” Hee-su hitting clutch shots on Shock’s flankers. The loser of each round picks the next map, so San Francisco dragged Philadelphia to King’s Row. Complex rotations and mind games led to a Shock win on one of the team’s favorite maps.

San Francisco’s dominance continued on Assault map Anubis as the team held Philadelphia off from a full completion of the map. Heesu and ANS traded blows on Sombra, sneaking in the eaves of Anubis for the most optimal EMP ultimate. This rivalry continued on Watchpoint: Gibraltar, when the Shock got full held by the Fusion. Philadelphia main tank Kim “Sado” Su-Min won the Winston wars repeatedly on the Escort map.

With a 2-2 score line, both teams moved to Oasis. The Control map was incredibly back-and-forth, with Shock DPS Rascal slicing and dicing through Philadelphia’s supports before being shut down by the tank line. The real difference-maker was Lee “Twilight” Joo-seok, whose flanking anti-healing grenades set San Francisco up for success.

On final map Numbani, something in the Philadelphia Fusion’s hardy defense seemed to crack. The Shock were able to roll through their attack with a massive time bank. San Francisco ended up holding Philadelphia before the last point of the map, earning themselves a second monthly tournament title.

As Countdown Cup champions, both the Shanghai Dragons and San Francisco Shock bring home $50,000 and get three wins added on to their season records. The runners-up, the Hangzhou Spark and Philadelphia Fusion, earn $25,000 and two bonus wins.

The Overwatch League returns next weekend with a series of make-up matches, evening the season record for teams whose schedules were derailed by COVID-19 cancellations. The London Spitfire and Seoul Dynasty face off at 3am CT on Aug. 14.