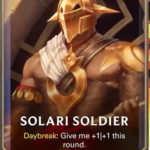 The reveal season for Legends of Runeterra’s second expansion, Call of the Mountain, is one week away from concluding. And today, Riot Games revealed four new collectible cards and a new keyword, Daybreak.

The newest LoR cards include Solari Soldier, Solari Shieldbearer, Sun Guardian, and Rahvun, Daylight’s Spear. Daybreak is a mechanic that gives your cards bonuses if they’re the first card that you played within a turn. This makes them the absolute inverse of the recently revealed Nightfall cards.

All of these Daybreak cards are printed with an aggressive playstyle in mind. The bonus stats they gain for the turn make them gain combat stats that far exceed other units of the same mana cost that you would spend on average. Since these cards gain their bonuses as the first card played within the turn, they have a natural synergy with the Nightfall keyword, which grants bonuses when they aren’t the first cards played within a round. The revealed Daybreak cards only have temporary bonus stats, though, not permanent bonuses. This means that to gain maximum efficiency, you’ll need to play fast or make aggressive trades to out-tempo your opponent and gain eventual value by controlling the board.

Due to the daylight theme, previous leaks, and the recent Tales of Runeterra video, this set of cards teases Leona. With only two champions left to be revealed after Leona is officially shown off tomorrow, it’s safe to assume that Diana is following soon after within this first set of the expansion.

Stand with the sun when these cards and more are dropped when LoR: Call of the Mountain officially releases for PC and mobile on Aug. 26.