A total of four Legends of Runeterra cards within the Forces from Beyond expansion were revealed today by Riot Games, along with two Evelynn tokens.

Evelynn is allegedly the final LoR champion within the Forces from Beyond expansion that is slated to get revealed on July 18 or 19. It’s also possible that a fourth champion may still get spoiled before the expansion’s release on July 20. Today’s Forces from Beyond spoilers showcased the Bilgewater and Bandle City Husk tokens, along with four archetype support cards.

It’s still unknown how Evelynn will use the Husk tokens, even though Gwen and Kai’Sa have already been revealed. The Bilgewater token, Thrashing Husk, provides Overwhelm upon getting sacrificed. And Scattered Husk from Bandle City grants Impact. A cycle of 10 Husk tokens is likely contained within Evelynn’s support package, with six revealed so far. 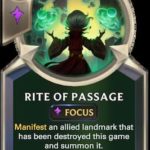 Illaoi got some support today via Riptide Sermon, a six-cost Slow spell that deals four to an enemy unit, Spawns three, and deals two to the enemy Nexus. It’s a solid spell that will slot perfectly into Kuvira’s Illaoi/Lux deck that ran the ladder briefly upon the release of the Worldwalker expansion.

Landmark archetypes also got shown support via Drop the Bomb and Rite of Passage. Likely getting put into Ziggs builds. Drop the Bomb is a two-cost Slow spell that deals two damage to any unit and summons a Scrappy Bomb, a Bandle City one-cost Landmark that deals one damage to the enemy Nexus upon completing its countdown of three.

On the other hand, Rite of Passage is a Landmark that can Manifest an allied Landmark that was destroyed during that game. The Shurima spell costs only two mana to cast at Focus speed and is a huge buff to multiple archetypes that use Landmarks and the Shurima region.

The final card from the LoR Forces from Beyond spoilers today was The Papertree, a Bandle City Landmark that supports Attach archetypes. Based on the name of the new card, it’s easy to assume it slots with Papertree Dragon, an Attach card dominating the meta at the Worldwalker Seasonal tournaments—although t’s unlikely that The Papertree will slot into the Gnar and Akshan deck specifically.

Players can test out all the new LoR archetype support cards with the release of Forces from Beyond on July 20.