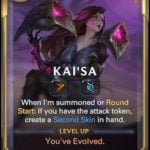 Riot Games dropped Kai’Sa’s package for Legends of Runeterra today, containing a new keyword and over a dozen new cards.

Keyword shenanigans are getting support via the new LoR Forces from Beyond champion, Kai’Sa. Scheduled to release on July 20, the Forces from Beyond expansion will feature at least three new champions: Kai’Sa, Gwen, and Evelynn. The reveal of Kai’Sa from Riot today on Twitter showcases the LoR champion as a five-cost in the Shurima region with the keywords Quick Attack and Evolve.

Evolve is a new Legends of Runeterrra keyword that states: “I have +2/+2 once you’ve given or summoned allies with six-plus other positive keywords this game.” Kai’Sa creates a Second Skin spell upon getting summoned or at the start of a round, granting Kai’Sa another ally’s positive keywords. With LoR keyword-producing champions like Viktor and Pantheon already hovering on the fringes of the meta, the potential of what Kai’Sa can accomplish is exciting.

Kai’Sa is a Legends of Runeterra champion within the Shurima region that costs five mana to cast. Her base stats are 4/4 at both levels one and two and she has the keywords Quick Attack and Evolve.

Leveling up Kai’Sa with the right support shell shouldn’t take more than a turn or two after she’s put on the battlefield, turning her into a 6/6 that can stack positive keywords from her allies. The keyword Scout was removed in Patch 3.10 as a generatable and random keyword. But keywords like Elusive, Regeneration, and Fearsome have a long-standing history of being able to close out games.

Once leveled up, Kai’Sa also creates Icathian Rain when she attacks, dealing one damage for each positive keyword to either an enemy with the lowest health first to even the opponent’s Nexus. In conjunction with a slew of keywords, Kai’Sa has the potential to drastically disrupt an opponent’s board and game plan.

Players can test out Kai’Sa and all her keyword shenanigans with the release of LoR Forces from Beyond on July 20.