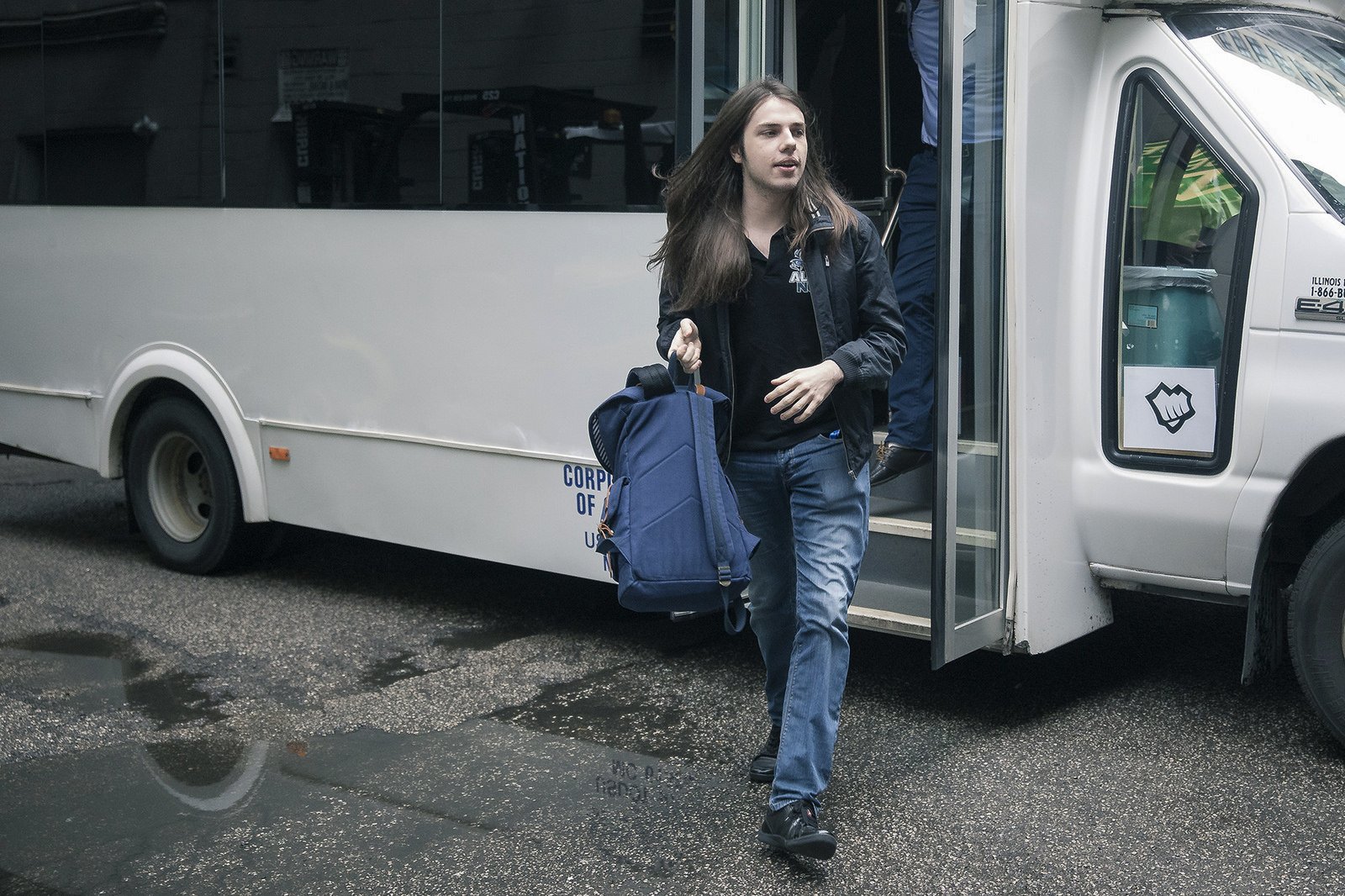 Kirill “Likkrit” Malofeyev has been the center of the League of Legends universe for the past month, but it’s not a good thing.

But Likkrit tells Dot Esports that he believes both the report and the punishment were unjust, and that he blames the potent combination of power abuse and his quotes being taken out of context for everything that has happened recently.

Considering where Likkrit was about a year ago, this situation seems hard to believe. He wasn’t just famous, he was famous for being a good guy and a morally upright player, specifically.

The speech he gave at Worlds in 2016 to honor G2 Esports is perhaps the only famous speech in League’s history, and it’s a far stretch from the threats of death and toxic commentary both Riot and Cybersport accused him of.

“They had literally no reason to play. They could just surrender, They could just go full-ARAM. Yes, that would be funny, but they have shown their competitive spirit, and they fought until the very end. When everyone hates you, everyone thinks that you don’t deserve to represent your region, and you find the strength inside of you to fight even though it doesn’t matter? That’s really cool, guys. Thank you, G2.”

When he gave that speech, Likkrit and the rest of Albus NoX Luna had just bested G2 to lock in a spot at the quarterfinals, something that had never been done before by a wildcard region.

G2’s fate was sealed before playing against Albus NoX Luna. There was no way for them to qualify for knockouts, even if they won, but they still gave it their all. They forced Albus NoX Luna to claw for that qualifying spot. Likkrit was truly inspired by their strength, and that speech was his own token of appreciation to the EU LCS squad for fighting so hard.

Unfortunately, that’s when things started going downhill for Likkrit. In May of this year, he was banned for three competitive games for toxic behavior in solo queue, and then Cybersport published its report last month, sparking the storm that would eventually end in his retirement.

Likkrit gained an enormous fanbase, both worldwide and at home in the LCL, following his emotional speech at Worlds last year. To those fans, word of his long ban and retirement came as quite a shock and, almost immediately, some began to dig for anything that could help him in his case. The original report claimed that he told all good players to “leave the region,” and that the “region should just die.”

Riot’s punishment cited this as defamation towards the company, but Likkrit’s fans argued on Reddit that Cybersport took what he said out of context, only showing the worst bits and pieces. To help with clarity, Likkrit himself uploaded the original clip to Reddit as well, immediately sparking the debate on whether or not he is guilty.

Between the comments on the YouTube clip and in the Reddit thread, it’s clear that a large portion of the fanbase speaking out seem to agree that his quotes were blown out of proportion. Riot responded to these fans in a Reddit comment by saying the Moscow office found “a good deal of useful criticism” in what Likkrit said, but that the “healthy feedback was spoiled by toxic statements.” The comment was downvoted to oblivion, and the arguments raged on.

The only person not joining in the debate? Likkrit. We spoke to him to figure out exactly what happened on the stream, and what went through his head when he decided to walk away from pro play.

You received your suspension for “discrediting the business reputation of Riot Games,” according to the company. Could you elaborate on exactly what happened?

Likkrit: What I said [on my stream] wasn’t in a bad way, I didn’t intend to hurt Riot Games’ reputation but, well, it doesn’t matter what I wanted to do at the end of the day, I still did it. I did damage their reputation, and they punished me for it, and that’s pretty much it. The problem here is that I didn’t really say much what wasn’t already known by the community beforehand, and I didn’t say something offensive towards them or their reputation.

The only reason it became that big is the Russian news site Cypersport.ru reported it with a very big bait. They claimed I exactly said that our region should just die. But in the context I used, it was more like “our region ought to die, because of…” or “our region should die if this happens.” You understand the point.

You believe Cybersport.ru took one of your quotes out of context, and you were punished based on that report?

Well, to be honest, I wasn’t punished because of that. Riot didn’t even want to punish me hard. They wanted to give me a fine, to give me a letter to say I’m not allowed to do it anymore or I will be banned permanently, like they have done already in the scene. It’s not the first time someone said something like I did, and it’s not the last time.

But this time, the head of the Russian office for Riot decided that he wanted to show his personal power, so it was, more or less, his personal decision to ban me, no matter what.

This isn’t the first competitive ban you’ve received this year. You were banned in May for three competitive games for solo queue behavior. Do you think your most recent punishment has anything to do with that?

To be honest, not really. The previous time, I was banned because I went full toxic mode. It wasn’t just toxic, it was like madman mode. The guy I went off on spoke up, posted on Reddit, and it was the second topic on the subreddit that day. The first was about Riot’s deal with BAMtech. Riot had to do something, and I don’t really blame them, and I don’t blame the guy who was in charge. He’s sort of my friend, despite the fact that he personally banned me.

Last time, I was toxic in-game. This time, I said something inappropriate on-stream. Imagine if Riot banned people for doing something against the rules on their streams. Like, Meteos would be banned permanently. I don’t want to count, because almost half of professional players would be banned if they did in-game what they did on-stream. For example, if we could talk about Sneaky, who is the ADC icon of NA, imagine how many times on-stream he uses words like the F-word.

You don’t think your punishment this time may have worsened because of your ban in May?

Well, should we talk about “technically” or de facto? Well, technically, [Riot] isn’t allowed to take that into consideration. The thing is, according to their own post on Reddit, they took in mind my previous statements, like when I used inappropriate language in interviews towards my opponents. But that was over a year ago, and I already took punishment for it.

Since I was already punished for that, according to Riot on the rules, they are not allowed to take that into consideration, but in their statement, they said that they did. So, I don’t really think that they are sticking to the rules, they just wanted to do what they want.

Would you say that the six-month ban Riot gave you was fair?

Imagine that a player was banned for six months because of what he said on stream. Not including Vasilii’s case, which was an in-real-life death threat, which is covered under global rules from Riot Games. Actually, if we talk about LCL rules, I didn’t actually break something. I’m allowed to talk like that off-season. I’m allowed to talk about whatever I want when I’m not under contract with Riot.

What can I say? If they wanted to punish me, it was because I probably went a bit too far. I really shouldn’t have done it that way; I used a lot of harsh words, but if we talk about a six-months ban, have you ever heard about a player getting banned for six months for something like this? Have you ever heard about three months? For something said on-stream. The only comparison I have is Vasilii, but that’s definitely not the same.

It’s [Riot’s] game, they’re allowed to do whatever they want. I can’t tell Riot what to do or what not to do, especially Riot Russia, who doesn’t care about players at all.

Could you explain why you chose to retire following Riot’s ruling?

I’m a pretty old player. Age in this game isn’t really your real age; age is how long you’ve played. I’ve been a very passionate player for a very long time, like four years, since the beginning of the CIS scene. The thing is, this year was probably my last year, anyway. I built a good team, and I wanted to work with it, because I thought we really had a chance doing Albus NoX Luna’s thing again, or maybe doing even better. But, if I’m banned for half a year, that means I only have half a year for preparation.

Is there anything you’d like to say to your fans?

Actually, yes. First of all, I’d like to say to all the people who support me directly, like the people in this situation that want to go revolutionary: I definitely recommend you not stop playing League of Legends, not to stop watching LCL or competitive League of Legends, because it won’t do anything good. The only thing you’ll do by doing this is hurt Riot Games, but Riot Games is a great company. It’s not really their fault that the head of the Riot Russia office is a power maniac.

Just play League of Legends. It’s a great game. Thanks to everyone who supported me during my whole career, because it’s very important for me that there are people who believe in me, and not only me, but in us when we were Albus NoX Luna. Or even better, those who supported me when I was a no-name in the Russian league who hadn’t been able to win a championship for like three years.

So, thank you guys. It was a great pleasure to be with you, but, I suppose, my story with League of Legends has ended.