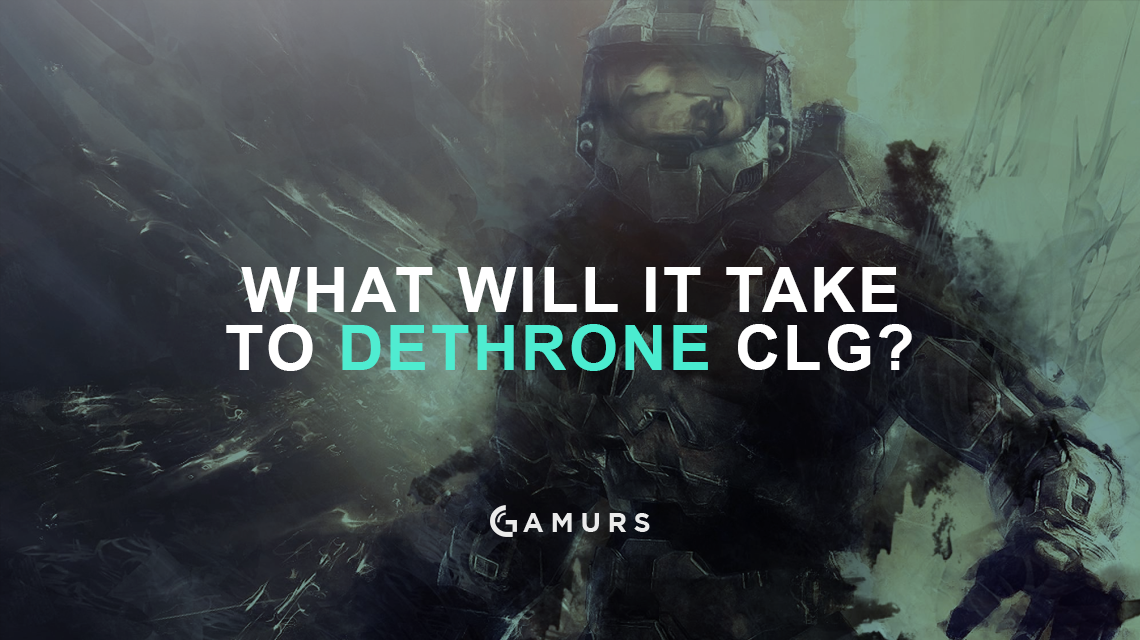 Counter Logic Gaming’s reign of dominance has already taken its toll on the competitive community. Win after win, CLG has constantly ruined the hopes and dreams of its competition, making some of us tired of their streak at this point. Seeing a team work hard to become the best in the world is always exciting to watch, but when the competition becomes stale and no one seems to be capable of stopping the best from getting better, something needs to change. With everyone getting ready for the fall season, the number one question on everyone’s mind is “what will it take to dethrone CLG?”

I am sure most of us would agree that the Halo community has a great amount of talent at the pro level. With plenty of experienced veterans and young stars competing, I don’t believe that the main problem that’s stopping CLG from their dominances is a lack of talent. In fact, some teams, such as Enigma 6, were formed mainly off of the pure talent all four players bring to the table and although this team possesses such great talent, they still have not managed to dethrone the king. With the pro scene having all the talent in the world, what could other factors be?

When you look at past god squads that dominated the scene at a time, such as Final Boss, Carbon, Triggers Down, Instinct and Ambush, each team took their own path to greatness, but one common strength every one of these teams had was strong chemistry. I tend to repeatedly point out the importance of strong chemistry and it is for good reasons. Although it may not guarantee you a win, chemistry is still one of the most crucial factors to a team’s success.

When competing against the top teams in the world, a team’s ability to work cohesively as a unit and to not crumble under the severe pressure will ultimately determine who the better teams are. We have seen on many occasions when teams who are very talented and have all the tools necessary to defeat CLG crumble due to the fact that CLG can easily capitalize on the slightest mistake a team makes and they can execute at ease due to their chemistry being much stronger than their opponents.

Although there are some teams in the Pro League that just can’t keep up with CLG, there are still a few that have proven that they can. Teams like Enigma 6, Cloud9 and Team EnVyUs put up great matches against CLG this season and although some of these teams may be getting ready for team changes, one thing we should keep in mind is how these changes will affect the team’s strength in chemistry.

Sometimes, there are players that pop up that top teams simply can’t ignore; players with more than enough talent to bring these teams to the next level but what is more valuable, an upgrade in talent or the strength in your chemistry? There are some players who seem to automatically fit in great with teams, such as Eric “Snip3down” Wrona on EnVyUs. Being on EG since 2014, Snip3down’s ability to work so well with a new roster after all these years is quite impressive and he may very well be the critical piece to EnVyUs’s ability to defeat CLG. Although this may be the case, talent alone won’t always improve a team, and at times, it may even worsen them.

A great example of this is back in Halo 4 when a team known as Warriors had a pretty big rivalry with a team known as Ambush, who at the time, was the most dominant team. After a rough loss to Ambush in AGL 5 Nashvile forcing Warriors to place second, the team initially consisting of Tyler “Ninja” Blevins, Bryan “Legit” Rizzo, Fasial “Goofy” Khan and Ryan “Ryanoob” Geddes dropped Ryanoob for Bradley “aPG” Laws, who many believe possessed more talent then Ryanoob.

There were many rumors that were created to provide reason as to why Ryanoob was dropped, including a humorous one which was that he was dropped simply for the fact that he choked a rocket kill in a crucial Extraction, Station 9 game that could have turned odds in Warriors favor. In the end, Ninja cleared all the rumors by saying that he replaced Ryanoob with aPG because of the slaying power he brought to the team.

Giving up chemistry for talent proved to be the Warriors biggest mistake as they would place fourth in their next event, AGL 7 Knoxville, losing to Classic, which was the team that picked up Ryanoob after the Warriors dropped him. They would later lose again to Classic in UMG Chicago 2013 in the loser’s bracket finals, causing Warriors to place third. This loss greatly hurt the Warriors since their whole investment on aPG being able to improve the Warriors turned out to be a massive fail. A memorable moment from this loss was in game five Onyx Slayer when Classic nearly embarrassed the Warriors 50-26. Some even believe that if Classic continued to apply pressure after they knew they would win, the Warriors wouldn’t have even been able to make it to 20 kills with the game at the time being 43-16.

After their rough loss to Classic, Warriors would eventually split before the next event with Ninja and Legit forming a new team called Requiem and Goofy reuniting with Ryanoob, reviving an older team by the name of Infamous. This is a perfect example of a team that had the tools to be the best falling apart over one team change, therefore reinstating the fact I made previously over the importance of team chemistry and how making even the slightest change to a roster could negatively affect the team’s future drastically.

During this time of “Rostermania,” my biggest fear is that some of the top teams that seem to have what it takes to defeat CLG at this moment may make one or two changes to their roster that may hurt them more than help. Teams such as Enigma 6, who previously defeated CLG in a Pro League match, and Cloud9, who was very close to sending CLG down to the loser’s bracket in the season finals, are rumored to be making some changes that scare me.

Team chemistry will always be one of the biggest factors to a team’s success and risking it for a promising player can turn out to be disastrous at times. Hopefully, none of these top teams make changes that set them back, because CLG has been winning for far too long and it is time to crown a new champion.

What do you think it will take to dethrone CLG? Let me know in the comments section below.
Zachery Chevere can be contacted on Twitter @PmL_Zarhaz