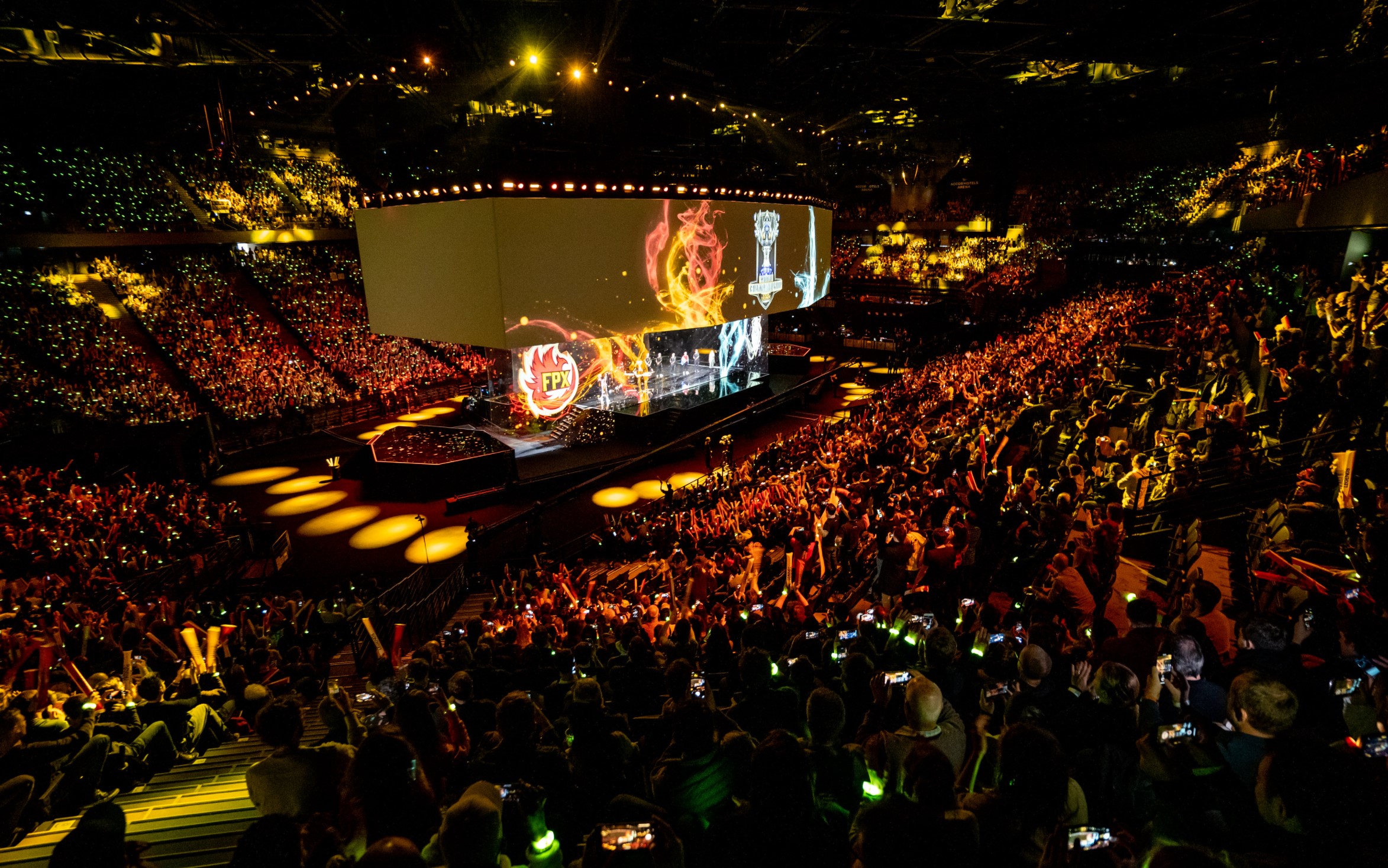 The esports industry is still on the rise as the calendar flips onto a new page. Its most noteworthy titles are leading the way, even though the most unpredictable era the scene has ever faced is still making its mark on a relatively young industry.

As the world hangs in the quasi-balance of the COVID-19 pandemic, the fate of the esports industry remains uncertain. Approaching the third year of pandemic living, though, the effects of these unprecedented times have become part and parcel of esports as a whole. Tournaments have remained mostly digital, fans have been largely restricted from live events, and COVID is still having an immense impact on the various scenes within esports—even two full years after its discovery.

The industry—still taking a tempered approach for now—is due to come back online in full sooner rather than later, depending on the trajectory of current events. Whether 2022 is the year in which the industry picks back up again is yet to be seen, but it’s still clear that even after several years of a fully digital outlook, the world of professional gaming has proven to be incredibly adaptable. Despite all obstacles, each major title is pressing on.

Here’s one big prediction for each of the biggest games in esports as we ring in the new year.

League of Legends: 2022 will be a landmark year for esports viewership

League of Legends is the most popular esport in the world, and its growth is exponential. In 2022, The game will likely only continue to get more popular in both the western and eastern markets. This season, the finals of the League World Championship eclipsed 73 million viewers at its peak, up 60 percent from 2020, according to Riot Games. If viewership numbers continue to climb at that pace, 2022 could prove to be a record-setting year for the game. Additionally, with Riot set to build brick-and-mortar remote broadcast centers to improve the quality and accessibility of its esports streams throughout the world, it wouldn’t be surprising in the slightest if more League viewership records continue to get unequivocally shattered.

CS:GO: Another year of steady growth is on the way

The rumors of CS: GO’s death were greatly exaggerated. Despite VALORANT emerging as the next big thing in the tactical shooter genre, CS:GO still has a loyal enough player base (and fan base) to keep both the game and its esports scene alive. The game stood out as the most-played title on Steam throughout 2021, according to Steam player tracking site SteamCharts. IEM Katowice, the traditional keynote for each calendar year in the CS:GO world, is scheduled to begin on Feb. 15.

VALORANT: Growth in all regions will create a stable balance of power across the world

VALORANT’s honeymoon period is over. In just a few months, the game will enter its second year of officially sanctioned competitive play, and serious questions surrounding the pro scene’s growth level will begin to pop up. Thankfully, with strong teams in culturally and geographically diverse regions across the world, VALORANT has the foundation to grow into a truly global esport in record time. Look for 2022 to play host to a spike in competitive viewership, as well as the game’s general player base.

To the casual Dota 2 fan, the game makes headlines once a year during its annual premier tournament, The International. Largely, that’s because of the massive prize pools the tournament sports each season. In 2021, The International’s purse surpassed $40 million, an all-time record for not just Dota 2, but the esports industry as a whole. This year, don’t expect Dota to pump the brakes. The top prize pool for the MOBA genre’s less popular relative could continue to set the bar for prize pools in the industry.

Like a mythical legend, Overwatch 2 is a promise that has been seemingly forgotten to time. After being announced two years ago—a practical lifetime in esports years—the game’s sequel has been lost in development throughout the pandemic, leaving Overwatch’s competitive scene to fend for itself with a game that’s failing to keep audiences’ interest. The 2021 OWL Playoffs peaked at just over 134,000 viewers during this season’s Grand Final, a drop-off of about 50,000 from 2020’s peak and a drop-off of nearly 200,000 from 2019’s peak, according to esports viewership data site Esports Charts. The Overwatch franchise is in desperate need of a shot in the arm, and the longer the original game’s long-awaited sequel remains shelved, the more fans will continue to lose interest in the blueprint.

The pandemic could easily continue to threaten Smash’s esports scene. Live events have been few and far between throughout the last two years. Unlike other esports, Smash doesn’t have the liberty of using online play, considering many in the scene have refuted it altogether. Top players such as Mkleo, Tweek, and many other trailblazers of the game’s modern era took time off from competing entirely while the game was suffering greatly from the effects of COVID-19. Smash, particularly Smash Ultimate, is entirely reliant on in-person events since online play has proven time and again to be sub-optimal for competitive tournaments. Genesis 8, a supermajor with over 4,000 attendees, is still scheduled to take place later this month. But with the U.S. reporting a record number of COVID cases each day due to the emergence of the Omicron variant, the tournament’s existence altogether could be tested—and so could the rest of 2022’s Smash circuit.

Fortnite: An eventual return to live events will rejuvenate the game’s esports scene

Fortnite esports peaked in 2019 when the inaugural Fortnite World Cup garnered well over 22 million hours watched across all its viewers, according to Esports Charts. Since that point, the game hasn’t come close to putting up the numbers that event did. Assuming the pandemic calms down and vaccination rates continue to steadily climb, live events should return to the esports scene in due time—most likely toward the back-end of 2022, considering the emergence of the Omicron variant in the U.S. If the Fortnite World Cup (and its $30 million prize pool) makes a comeback in 2022, Fortnite esports will instantly receive a boost.

While Call of Duty will always have a strong, dedicated player base, its esports scene could get lapped in 2022 if Activision-Blizzard doesn’t find a way to keep its competitors at arm’s length. Halo is on the rise, VALORANT is an ever-growing presence, and the CoD scene as a whole is starting to feel the heat from other shooters. CoD’s margin for error will be slimmer than ever in 2022 as threats and competitors could surpass an established industry veteran like CoD this year. Plus, with top figures in the game’s esports scene noticeably unhappy and outspoken about internal issues, 2022 is showing all the signs of a “prove it” year for an esport that’s arguably in more turmoil than ever before.

Rainbow Six has its place in the industry as a mid-tier title with a reliable fan base, so don’t expect to see the title go anywhere in 2022. Granted, Rainbow Six might take a hit in terms of its overall draw this year since it will still have to fight against the old guard of FPS games like CoD and CS:GO, while newer competitors such as VALORANT and Halo: Infinite could make growth even more difficult for Siege.

World of Warcraft: Organizations will invest in the PvE scene

Even though WoW is nearly 20 years old, the game still has a budding esports scene. After finding new life via competitive PvE in 2021, don’t be stunned to see top-tier teams like Limit and Echo potentially get noticed by legacy esports organizations this year in preparation for another Race to World First event, as well as another WoW expansion sometime in the future. While the game itself is still fairly tricky to navigate from a financial perspective—paying a roster of 20-plus players isn’t easy—there’s still opportunities to be had.

We’re entering year three of the “COVID era” of esports, and Rocket League still has room to grow. The game has spent the last two years steadily climbing and its esports scene is still moving upwards at a respectable pace. The RLCS boasted its biggest prize pools since the beginning of the pandemic last June with the North American Championship. Its total pool of $400,000 was supported by an average viewership mark of over 136,000 viewers, according to Esports Charts. Rocket League has solidly carved out its own little niche in the industry and it still has reason to move upwards in 2022. While it’s unlikely that the game will burst into the top tier of the esports market in 2022, it’s definitely possible that it will continue to develop its own fan base over the next year.

Apex Legends: A highly engaged player base will be Apex’s backbone

Apex Legends will likely continue to have a high impact as a leader in the battle royale genre in 2022. After coming to the Steam client in November 2020, Apex sat in the top five in active players among all games played on the platform throughout the majority of the 2021 according to SteamCharts. Although PUBG sports a higher number of concurrent players, based on SteamCharts’ data, Apex is poised to climb further in 2022 thanks to strong developer support and a plethora of esports tournaments throughout 2021 to serve as a watermark.

Things are looking up for Halo. The widespread release of Halo: Infinite and the debut of the Halo Championship Series have breathed new life into the franchise. General audiences and esports fans alike are set to ring in a new era of Halo in 2022. The franchise has enough name recognition to pull its weight in the gaming community. The 2022 Halo World Championship is scheduled to begin on Oct. 20, and the lead-up to that event could draw more eyes on the legendary franchise than ever before.