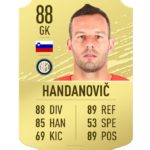 The next step in the gigantic ladder of success that is the FIFA franchise is less than a month away. Scheduled to officially release on Oct. 9, FIFA 21 aims to bring more freedom to Career Mode, more customization options for Pro Clubs, and a highly anticipated co-op mode for Ultimate Team.

In addition to all the quality of life improvements, countless roster updates will be available for players to enjoy with stars of the past soccer year getting some love in the form of stat upgrades. Though the pause on the last year’s competitive soccer cycle has made it harder to rate each player, the best keepers still found a way to show themselves through marvelous saves or simply by just keeping clean sheets.

The big three of the last year are still standing strong with a couple of minor changes when it comes to their order. Of course, some have to fall so others can rise. Most notably, Manchester United’s De Gea dropped down to 11th place following his rise to the fourth-best goalkeeper in FIFA 20.

Knowing who the best goalkeepers in the game are will keep you updated on who to look for while opening packs or shopping through the marketplace. Though players tend to start with strikers when building their team, a decent goalkeeper can initially lay a championship-caliber squad’s foundation. After all, you can’t rush to the opposition’s net without leaving your own net in the hands of someone you can trust.

Here are the best goalkeepers in FIFA 21.

When the topic is the Italian football league, Serie A, most think of Juventus. Juve isn’t the only giant that rests in Serie A, however. The competition has been heating up with other household clubs like Inter Milan finally waking up.

Despite falling one step short both in its domestic league by a single point and losing with a single goal difference in the Europa League finals, Inter Milan’s form has been impressive. The team’s chemistry is off the charts and goalkeeper Samir Handanović is like the glue that holds the team together.

Handanović played in 48 games throughout the last soccer season and he had 16 clean sheets. Having been a part of Inter Milan since the 2012-13 season, it’s clear that Inter Milan has found its rock and that rock is made of solid showings.

The team’s current captain climbed two steps higher on the ladder and is now the seventh best goalkeeper in FIFA 21. Though his overall rating hasn’t changed, Handanović received a slight buff to his kicking by four points. 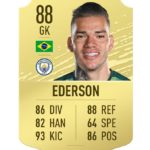 Manchester City has been on a dominant run over the past couple of years. The club’s local and international challenge constantly pushed it to greatness and City secured the Premier League cup with a single point difference over Liverpool. But the team’s Champions’ League performance has left a lot to desire for fans.

That doesn’t change the fact that City has been playing a great style of football and Ederson has been a significant part of its success. Ederson started in 44 games in the 2019-20 season and had 20 clean sheets. His consistency allowed City to expand in other areas of the field, knowing they have a trusty gatekeeper in the back who can make up for their mistakes.

Like Neuer, Ederson also protected his place in the FIFA rankings and stayed in the sixth spot. He hasn’t received any stat changes, meaning he’s still rocking his rating of 88. 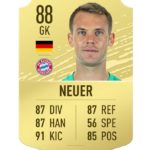 Bayern Munich had one of its best seasons in recent years. The club wasn’t on a slump or anything, but it always fell short at bringing international success. Munich’s curse was finally broken in 2020 since the team lifted the Champions’ League trophy—and Neuer was a massive part of its success.

The German goalkeeper started in 51 matches throughout the last season and had a total of 22 clean sheets. While Munich’s defensive line deserves some credit here, Neuer’s presence in front of the net gives them the chance of making some mistakes here and there.

Though Neuer’s overall placement hasn’t changed from the fifth position, he was buffed slightly, which increased his average rating from 88 to 89. 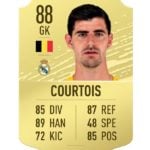 When the best striker in FIFA 21, Cristiano Ronaldo, left Real Madrid, fans were curious whether it was the end of an era. The club’s then goalkeeper Keylor Navas left as well, which forced Real Madrid to make some notable transfers to keep the squad where it is. Though the transition period was challenging for the new squad, the team stepped out of its shadow with the reliable Thibaut Courtois, who was acquired from Chelsea.

The Belgian keeper has been essential for Real Madrid’s decent domestic success and had 21 clean sheets in 43 appearances. His impressive 50-percent clean sheet rate has pushed him up to the fourth place with a single point increase in his overall rating. The experienced goalkeeper was ranked eighth in FIFA 20 with a rating of 88. 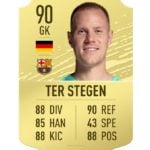 Barcelona is one of the biggest clubs in the world. When the team needed a goalkeeper in 2014, most fans doubted the transfer of Marc-André ter Stegen. He was just off the youth squad of Borussia Mönchengladbach. Though fans thought the young ter Stegen had a lot to offer, not many agreed with Barcelona’s decision to take a chance on him.

Well, that decision worked out quite nicely both for the team and ter Stegen since the German keeper still keeps on improving and showing great form. Though the season ended in a heartbreaking manner for the Spanish squad since it got eliminated in a crushing fashion from the Champions’ League, ter Stegen still had an impressive performance. The keeper managed to put up 17 clean sheets out of 46 appearances.

He took a single step back in terms of rankings since he was ranked second in FIFA 2020 but ter Stegen’s overall rating didn’t change a bit. 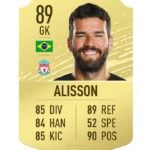 Liverpool has been the team to look out for over the past three years. Ever since Jürgen Klopp joined the team, Liverpool has gone through an impressive rebuilding process. Allison Becker joined the team in the 2018-19 season, replacing Loris Karius after Liverpool suffered a heartbreaking loss to Real Madrid in the Champions’ League finals.

The player was already showing a lot of promise in Roma and he practically became one of the centerpieces of the latest Liverpool squad. The stability and trust he assures to his teammates had him ranked as the third best goalkeeper in FIFA 20. Though Liverpool couldn’t advance through the later stages of Europe’s most prestigious soccer tournament this season, it managed to take the Premier League cup home in impressive fashion.

Allison played a total of 37 matches throughout the last season and had 17 clean sheets. Another impressive year for the Brazillian goalkeeper pushed him one step forward in the FIFA 21 rankings and he was awarded a boost of one overall rating score. 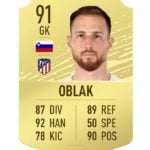 The best goalkeeper from last year had another phenomenal season. In addition to setting the new La Liga clean sheet record, Jan Oblak was a crucial part of Atletico Madrid’s domestic and international success. Though the team wasn’t able to lift any major cups, its stable play style and impressive run through the Champions’ League made them one of Europe’s top squads.

Atletico beat one of the favorites, Liverpool, in the earlier stages of the tournament with an aggregate score of 4-2. Oblak played in 49 matches throughout the last season and had 22 clean sheets. Conceding only 38 goals in all the competitions he’s been part of, Oblak will be the keeper to have in FIFA 21 with his 91 ratings.

He was also awarded the same overall rating after a similar performance in the 2018-19 season. Oblak had 24 clean sheets in 46 games, which shows how stable he is when it comes to delivering results.