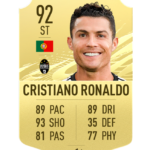 EA Sports revealed the overall ratings of the 100 best players in FIFA 21 today, which will officially launch on Oct. 9.

This list, however, contains the top 10 strikers (ST and CF) in FIFA 21. The list won’t take into consideration cards that will be released for FIFA 21 Ultimate Team, where several new cards are added to the game mode every week.

Here are the 10 best strikers in FIFA 21 that you can play with in friendly matches, Career Mode, and Ultimate Team, according to the ratings released by EA Sports today.

Suárez isn’t the same player he was when he arrived in Barcelona in 2014 after a successful three-year stint with Liverpool. The Uruguayan, however, is still one of the most relevant strikers in the world.

The 33-year-old will have an overall rating of 87 (89 in FIFA 20), tied with Ciro Immobile from Lazio, Pierre-Emerick Aubameyang from Arsenal, Antoine Griezmann from Barcelona, and Roberto Firmino from Liverpool. Griezmann and Firmino haven’t made it onto this list because they have lower Shooting stats than the other three.

Suárez may be slow (70 Pace), but his Shooting skills (90) will certainly compensate for that.

There aren’t too many clubs as dependable as Arsenal is to one of its players. Aubameyang is by far the most impactful player on the English club, having recently decided the FA Cup grand finals for Arsenal against Chelsea (2-1) by scoring two goals.

Because of his high Pace, Aubameyang has been one of the best options in FIFA throughout the years. In FIFA 21, he’ll have an 87rating and will have 93 Pace, which will definitely make you sweat every time you face him.

Immobile has evolved into a lethal striker since he arrived in Lazio in 2016. The Italian isn’t the most technical player on this list, but he sure knows how to score goals.

The 30-year-old won the European Golden Boot award in the last soccer season when he scored more goals than anybody in league fixtures in Europe. Immobile scored 36 goals throughout 38 Serie A matches and will be an 87-rated striker in FIFA 21.

If EA makes headers a viable option in FIFA 21, you should definitely play with Immobile to test his skills.

Although Maurizio Sarri lost his job at the end of the season, he did recover Dybala’s best form during his period with Piemonte Calcio. The Argentinian almost left Italy in 2019, but instead, he stayed and fought for a place on the first team.

The 26-year-old was a part of one of the best attacking duos last season and helped Cristiano Ronaldo score a lot of goals. For this, Dybala maintains the same rating he had in FIFA 20 (88). Watch out for his Dribbling stat (91), which is as high as Mbappé’s Dribbling stat.

Kane didn’t have his best season in 2019-20, mostly because of injuries. The 27-year-old, however, is easily the best English player of his generation.

In FIFA 21, Kane will be an 88-rated striker, one overall rating less than he was in FIFA 20. But don’t sleep on this card since he’s one of those deadly strikers who only needs one chance in a match to score a goal—especially if EA finds a balance between Pace and Physical players.

The French striker spent several years of his career assisting goals or making plays to potentialize Cristiano Ronaldo. When the Portuguese star left Real Madrid in 2018, the Spanish team needed someone to step in.

It took one season of adaptation, but Benzema showed in the 2019-20 season that he can win matches for his team. Benzema scored over 20 goals for Real Madrid in LaLiga and helped them secure the national championship. He’ll be an 89-rated striker in FIFA 21, which is two overall points higher than he was in FIFA 20.

Few players on this list are as consistent as Agüero. Season after season, Agüero remains one of the most important players on Manchester City, one of the richest soccer clubs in the world.

The Argentinian maintained the 89-rating he had in FIFA 20 and will be one of the best strikers in FIFA for one more year.

Although Mbappé is just 21-years-old, he’s nearly done it all already. The French prodigy won the FIFA World Cup in 2018 and has won four editions of the Ligue 1, one with Monaco and three with Paris Saint-Germain.

The only trophy that he still hasn’t lifted with Paris Saint-Germain is the UEFA Champions League (UCL), but he helped the French team make it into its first UCL grand finals last season. The young star is FIFA 21‘s global cover star and will have an overall rating of 90.

The Polish beast has been a key piece in Bayern Munich since he arrived from Borussia Dortmund in 2014. In 2019-20, however, Lewandowski became the second player to win the European treble (national league, national cup, and UCL), while being the top scorer in all three competitions, repeating the legendary Johan Cruyff’s achievement with Ajax in the 1971–72 season.

For that, EA has boosted Lewandowski’s overall by two points (89 to 91), if you compare his upcoming version with his FIFA 20 one.

Does Cristiano Ronaldo really need an introduction? The Portuguese star is the true goal machine of his generation and is still breaking records at the age of 35.

Cristiano Ronaldo was brought from Real Madrid to Piemonte Calcio to help the Italians win the UCL. The team hasn’t won it yet, but at least the Portuguese star helped them maintain control in Italy. This year, Cristiano Ronaldo will have a 92 overall rating, one point less than he had in FIFA 20. But he’s still the best striker in the game.