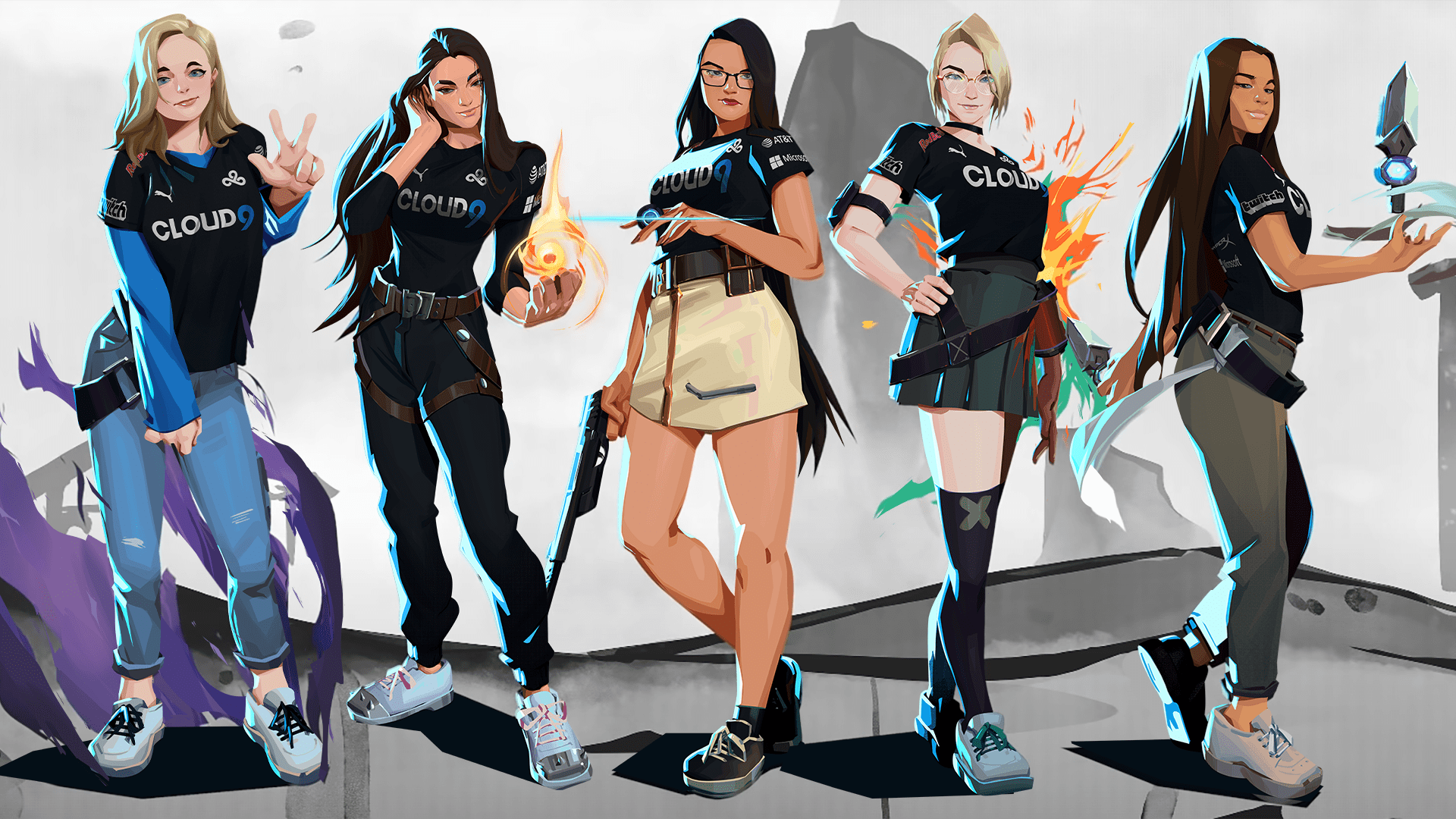 The female VALORANT scene has grown quite a bit since late 2020 when the Discord community Galorants started hosting tournaments for teams with all-female and non-binary players. These tournaments evolved into a partnership with Riot Games via the VCT Game Changers circuit, the female counterpart to the VALORANT Champions Tour.

Ultimately, the goal is for female players to be integrated into the male-dominated VCT, but giving women and non-binary players opportunities like Game Changers is an important first step.

Game Changers continues to grow into new regions and new organizations, as more and more female teams pop up in 2022. But who are the stars of the female VALORANT scene? Here’s our list of the top 10 female VALORANT players.

Like many other players on this list and on the men’s side of professional VALORANT, klaudia began her esports career as a CS:GO player, playing on the female team of organization Nigma Galaxy (previously Galaxy Racer). Klaudia retired from professional CS:GO in February 2021 and switched her focus to VALORANT.

After captaining the team Project X, whose roster was picked up by Guild to build their female team, klaudia was the obvious choice to continue to captain the squad. Many of klaudia’s skills transferred from CS:GO to VALORANT easily, and despite not playing duelist, has an average combat score of 248 in all of her matches with Guild X. She mainly plays Sova for her team or other initiators to gather information. Guild X’s biggest rival is G2 Gozen, to whom they have finished second in the last three Game Changers EMEA events.

Rise is CLG Red’s controller player, specializing in Brimstone, Viper, and Omen. She excels at playing around her utility in creative ways to give her an advantage. Playing with CLG Red since May 2021, Rise’s best results with the team are two second-place finishes at the VCT Game Changers NA competitions behind Cloud9 White.

While CLG Red has been making roster moves lately, the Quebec native will stay with the team. She has also recently shifted into the in-game-leader role and will be piloting CLG Red into the next Game Changers series. Rise recently said in a video she feels moving to the role of in-game-leader has helped her find her voice on the team.

Florescent is a 15-year-old VALORANT prodigy. She is still too young to play in the VCT or Game Changers, but she hit Radiant at only 14 years old and currently plays on an independent team. She is eagerly awaiting her turn to play at the top level, having already played in many smaller tournaments like the Sakura Cup and Vanguard Championship Series with various teammates. She is playing with Misfits even though she is not eligible for Game Changers for another year.

Mimi, a native of Denmark, is a former CS:GO pro who has played in both Europe and North America. To start off her VALORANT journey, mimi was originally signed with XSET, because she had previously been on the organization’s CS:GO roster. She left XSET shortly before they picked up the roster of the NA-based team NOTHING2LOSE and went back to Europe.

BENITA also started her professional esports journey as a CS:GO player. She played on CLG’s female CS:GO team and is a veteran in the CS:GO scene. In 2021, she made the transition to CLG’s all-female VALORANT roster, CLG Red.

CLG Red has made several roster moves lately, one of which involved letting go of bENITA, a decision she felt was best for her personal growth. She found a spot on Shopify Rebellion earlier in June of this year. She is known for her strong aim, game awareness, and confidence.

BENITA is expected to make a powerful addition to an already strong roster, which has finished second in the last two North American VCT Game Changers tournaments. She will join teammates KP, Lorri, flowerful, and sonder at the next VCT Game Changers NA event. She has already showcased her belief in her new team, saying “I have so much confidence that we can take down Cloud9, I’m not even worried,” in a recent video.

Lynn joined Gen.G Black in July 2021 from Man I Love Fwogs, an independent team that has seen two of its former players go on to sign with larger organizations. Shortly before Stephanieser, a player on Gen.G’s original roster, retired, Lynn signed with Gen.G. The team needed a fifth player, and she stepped in to fill the gap perfectly.

She is one of the best duelist players in the NA VCT and is consistently making a huge impact alongside her teammates. Lynn is always trusted to frag out and do her thing, whether she is on Raze, Jett, or Breach when the team ventures to Fracture. Her average combat score is 250 across her matches with Gen.G—higher than male stars like OpTic’s Victor and XSET’s Cryo. Lynn also streams both VALORANT and CS:GO and is an expert meme-poster on Twitter.

Jazzyk1ns is one of the youngest players in C9 White, the most successful all-female VALORANT roster to date. C9 White have won nearly every tournament they have competed in, and have even competed in the male VCT circuit.

Jazzy mostly plays duelist for C9 White aside from a few maps where the team has her flex to Sage. She consistently ends maps with a KDA above 1.1 and excels at all elements of the game, from lurking and sneaking up on enemies to hitting the trickiest of Operator shots while on Jett. The young player isn’t in charge of being the in-game leader or captain of her team, but she is the trusted duelist that gets the job done every time.

Having only just graduated high school, Jazzy undoubtedly has even more success in front of her and is a player to be feared on any server.

Ellie now plays for XSET full time, and also streams. Ellie excels in a variety of different roles and has played everything from duelist to smokes while on XSET, but she particularly shines on Skye.

Bob is the newest addition to the already stacked roster of C9 White. Bob is set to come in to replace former C9 White player Annie Dro, who has transitioned into a content creation role for the organization as announced on June 15. Annie previously mostly played the initiator role for C9 White, and Bob will likely be doing the same, her main agents being Sova and Fade.

Bob left her previous team, Soniqs in March, and was seen playing with some of the other C9 White members in the months leading to her addition to the team. Bob has plenty of experience in the VALORANT scene, having competed at several tournaments in the past with previous teams as both a rostered player and as a sub. Fans are anticipating her debut with C9 White.

MeL is the in-game leader for C9 White. She is consistently a top-performing player not only on her own team but also in any server she plays in. MeL has led C9 White to victory in every VCT Game Changers tournament they have entered and has worked her way to a pristine VALORANT resume.

MeL’s knowledge of the game is extensive and she excels in many roles. Most recently, she has shown expertise on Chamber, an agent that allows for both an offensive and defensive presence. Chamber’s ideal playstyle combined with MeL’s aim and game sense makes her unstoppable.

MeL has received praise throughout all levels of the VALORANT scene, from people who play casually to top players in the men’s pro scene. In 2021, Sentinel’s player TenZ even said he thought meL would be able to easily make it onto a VCT team.