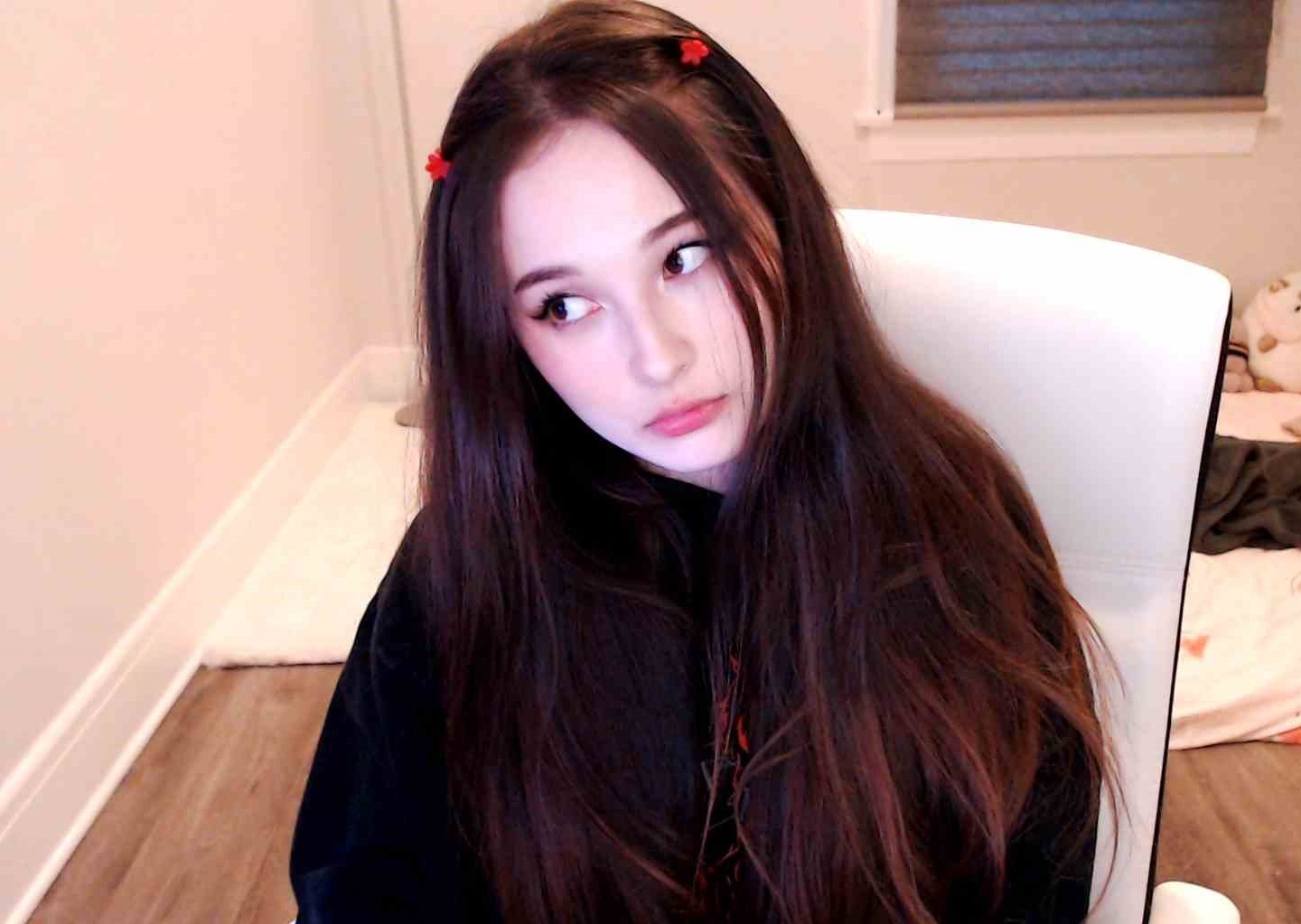 From growing up with the goal of being the class clown to “fit in” to now being a highly beloved creator known for her endearing and charming personality, TinaKitten has become a streaming icon.

TinaKitten is regarded by all her streaming friends and the community she has cultivated as an overwhelming beacon of positivity and kindness.

After moving from South Korea to America, TinaKitten grew up noticing people viewed her differently because of her appearance. She didn’t fully realize it at the time, but now reflects on her past and recognizes that the racism she experienced fueled her desire to be noticed beyond her appearance and led to her attempting to become a class clown who would be known for her personality rather than perceived for her looks.

While her goal was to become known for her funny personality and “fit in” better because of this, TinaKitten still ultimately ended up mostly isolating herself from others.

As many others have also done, TinaKitten sought refuge and disconnection from the real world in the imaginary worlds of video games.

Her love of gaming began while she was seeking to escape from reality. She had no plans to get into streaming and simply played games because enjoyed them.

Although she’s been around Twitch since she was about 14 to 15 years old, it wasn’t until the end of 2019 that TinaKitten fully committed to streaming and began to gain a steady faction of fans and a solid following. Between 2019 and 2020, the star saw rapid success as she continuously gained massive amounts of followers on Twitch during this time period. Her growth has only increased further as in 2022 she now boasts over 1,200,000 followers on Twitch.

Her sudden and rapid climb in fame originated from when she decided to play Among Us, as is the case with many other streamers who also increased unprecedented immediate growth. TinaKitten was a member of the most well-known group that rose to fame playing Among Us, which is a group that includes some of the biggest names in streaming like Valkyrae, Sykkuno, and Disguised Toast.

She rose to fame quickly during this time period and received such a high outpouring of love and support that she would even cry after the streams ended simply out of utmost happiness.

Even though she was seeing success, it wasn’t until Oct. 28, 2020 when TinaKitten first hit 100,000 followers that she realized she could actually do streaming as a full-time job. Before this happened, she had believed she could continue to stream for the rest of her life and never hit this number. After it happened, the number only continued to grow beyond her expectations and it was then that TinaKitten came to realize she could make streaming her full-time profession.

What games does TinaKitten play?

TinaKitten is a variety streamer known to play just about anything, as long as she’s interested in it.

Her most streamed game goes back to her roots and is Among Us, with just over 290 hours in this category according to TwitchTracker. Her second highest category, with just over 165 hours, isn’t gaming and instead is in the Just Chatting category. TinaKitten’s third most streamed category is in Minecraft, which she has 143 hours in.

Outside of her top three categories, TinaKitten has 52 hours in Hollow Knight, 44 hours in Rust, and 42 hours in Genshin Impact. Across all categories combined, she has streamed for just over 1,200 hours.

TinaKitten can also regularly be found on other streamers’ channels in voice chat either playing games there or just chatting. Some of her closest friends and the channels she can be found on most frequently include Karl Jacobs, Foolish_Gamers, Valkyrae, and Sykkuno.

How much does TinaKitten make?

Although she has amassed quite an impressive following, TinaKitten is not among the top highest paid streamers on Twitch and thus her earnings were not revealed during the infamous Twitch leak incident. This means what she actually makes can only be calculated based on speculation.

TinaKitten has both a YouTube channel and a Twitch channel, but is is mostly inactive on YouTube and thus the vast majority of her revenue comes from Twitch. The variety streaming star’s schedule also fluctuates drastically and thus the amount that she makes also frequently changes.

TinaKitten was born in South Korea and lived there for much of her life. However, she moved to America when she was fairly young and thus doesn’t speak South Korean fluently.

Why is TinaKitten so popular?

TinaKitten’s magnetic positivity and kindness have marked her as a beacon of light among her friends and her community. Although her rise to fame happened during the Among Us era and fans grew to love watching her play the social strategy game, TinaKitten has since cemented her place as a staple variety streamer in the community.

Fans will watch TinaKitten play just about anything because of her always upbeat and endearing personality. Her community is also equally as happy to just listen to her talk and ask her questions.

The streaming star also regularly creates content alongside her wide network of friends ranging from fellow 100 Thieves members like Valkyrae and BrookeAB to Minecraft stars like Dream and GeorgeNotFound.

TinaKitten is also a member of the popular Minecraft server called the Dream SMP. The server is exclusive and invite only by Dream himself. The creators on the server utilize the platform to create complex interwoven stories, known by fans as lore, mixed with generous amounts of humor.

The variety streamer has also had two ventures into the world of music. She appeared in the background of Bella Poarch’s “Inferno” music video alongside other massive creators including TommyInnit, Pokimane, and Ludwig.

Perhaps expanding her roster even further, TinaKitten may have lent her voice to the final line in Corpse Husband’s song “Misa Misa!” The line at the very end of the song certainly sounds like the 100 thieves star, but both creators have continuously been dancing around directly answering if it is indeed her or not, although they continue to hint that it is.

TinaKitten is also an artist and her community loves to watch her draw and view her various artistic creations. Her art style is very cartoon and she regularly creates cartoon-style drawings of her streamer friends and shares these, such as the following drawing she shared of her alongside her friends Foolish_Gamers, Corpse Husband, Karl Jacobs, Jack Manifold, Emma Langevin, and Callahan.

The most popular clip on TinaKitten’s Twitch channel features her alongside fellow 100 Thieves stars Valkyrae, BrookeAB, and Fuslie during a cooking stream the four of them did. BrookeAB reads a message from chat that asks, “why the f is Brooke there?” to which she replies “this is my house!”

TinaKitten, Valkyrae, and Fuslie immediately jump to BrookeAB’s defense and repeatedly declare “this is her house!”

So, what’s next for TinaKitten?

TinaKitten has expressed her desire to do more outside, in real life, travel-style content as the world continues to overcome the COVID-19 pandemic. As things have gotten better, she has already begun to do so, but it is likely fans can also expect to see more of this kind of content in the future.

Although she joined the Dream SMP Minecraft server in 2021, TinaKitten has not had a chance to really be part of the lore thus far. With the arrival of season two imminent and Dream confirming all members of the server will be heavily involved, viewers can expect to see TinaKitten stream on the Dream SMP regularly and likely even create her own lore centered around her canonical character.

It is also likely TinaKitten will soon be in more installments of the monthly MC Championships (MCC).

She joined the tournament in May 2022 and has only competed in three runs of the Minecraft tournament thus far. Fans can expect to see her return as a competitor once more in future installments of the event.