A breach of Twitch’s data exposed information regarding payouts for streamers over the course of the past 26 months, and as you might expect, some of the platform’s top streamers have made millions.

The Twitch payout leaks only include money from subscriptions, bit donations, and advertisement revenue. The figures do not include any personal sponsorships or direct donations a streamer might have had over that period of time.

The payouts also do not include any money they may have received from Twitch directly for signing a contract to stream exclusively on the platform.

Payouts listed are for August 2019 through October 2021, and among the top streamers are a slew of usual suspects, including xQc, Summit1g, and Tfue. 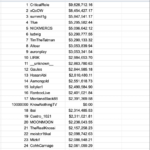 Because websites like Twitch Tracker keep tabs on the number of subscribers the platform’s top streamers have, many viewers have a general idea of how much streamers make in that regard.

Perhaps the biggest information to gather from the leaks is that individuals who are privy to how much streamers might get in ad revenue and bit donations might be able to then use some math and deductive reasoning to figure out how much money they make per subscription.

The default payout for a subscription is 50 percent of $5 ($2.50), but top partnered streamers get a larger percentage than that—one that is negotiated with the platform.

While streamers are not allowed to disclose that information, one of Twitch’s more popular streamers Ludwig suggested that streamers could use the information from the recent leaks to fight for a larger portion of subscription money.

The idea is that if there are people with fewer subscribers who are making more money, they likely have a higher payout per subscriber.