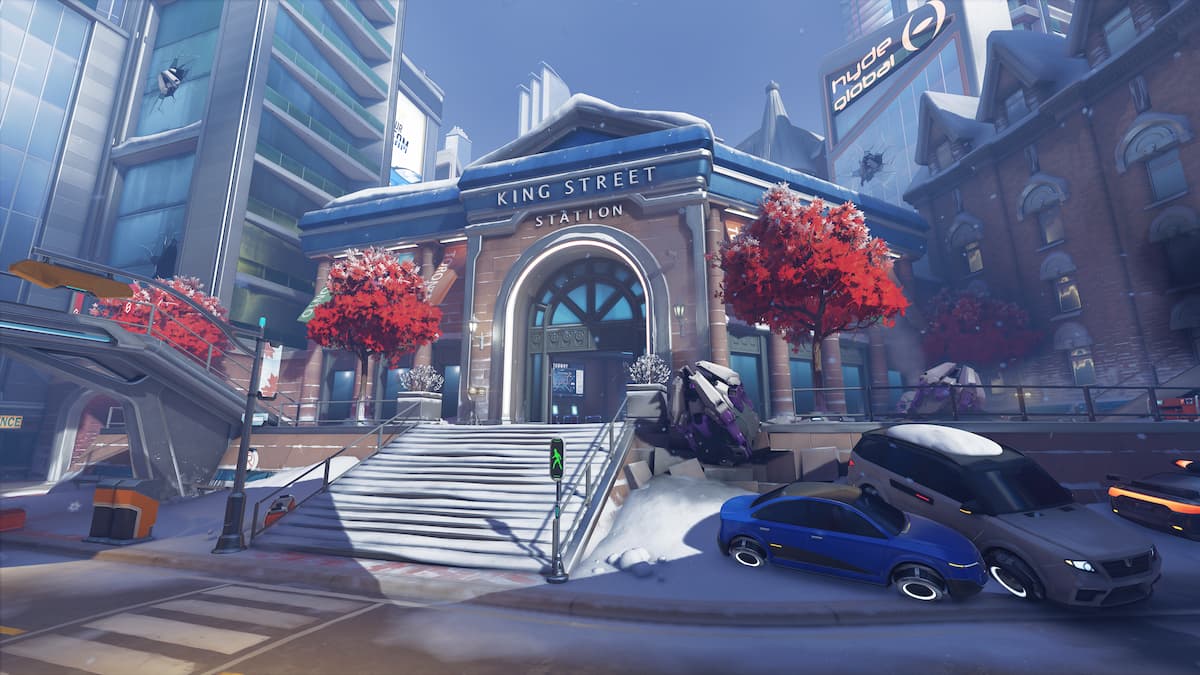 One of the first sequel maps revealed to Overwatch fans during BlizzCon 2019, New Queen Street (formerly known as Toronto), has been the “face” of the new Push mode for multiple years. With the release of the Overwatch 2 beta on April 26, players can finally dive into this Canadian paradise for themselves.

Home base of the game’s newest hero, Sojourn, Overwatch’s version of Toronto is full of snow, clean chrome, and infinite nods towards its diversity. Food shops of all types line the pathways alongside many stereotypic Canadian necessities—keep an eye out for ads about Tom Beansons, a clever nod towards Tim Hortons.

This is also one of the few new maps that’s steeped in lore, mostly relating to Sojourn. Multiple shops in the town prominently display prosthetics and cybernetics, indicating that New Queen Street is a hub for the exact kind of technology that Sojourn utilizes in battle and life.

While futuristic Toronto likely holds a lot of secrets for the future of Overwatch, here’s what you need to know to tackle its snowy shenanigans in the present day.

Players will spawn in one of two points on either side of the map, both an equivalent amount of space away from the initial Push bot’s location. One spawn is inside the game’s version of Union Station, which comes complete with a prominent map of the Toronto Subway system. The other is inside an arena, spreading the gospel of Canadian curling to gamers everywhere.

Immediately outside either spawn is a round metal circle that indicates where the opposing team must push the payload.

The mode’s friendly payload-pushing robot, T.W.O., is located under a covered bridge in the middle of the map. T.W.O. is surrounded by multiple red buses and a myriad of perpetually blooming maple trees that science has yet to explain. The robot will unlock after the first 30 seconds of the round, giving players a chance to run over to his start location and start fighting.

Unlike Escort and Hybrid maps, which take payloads from one place to another across a linear map, New Queen Street goes in two separate but very similar directions. The ends of the map are the initial spawn points and the direct middle is T.W.O.’s original location. Between these points are two visually similar checkpoints that will unlock a forward spawn for the “pushing” team.

Immediately after leaving either spawn, players will be met with a building that has open windows with plenty of room for snipers to take hold. The next “level” of the map is also similar, with rows of cleverly named shops and small alleyways. Unlike old Overwatch maps, these aren’t purely visual clutter; some shops are open, allowing players to duck in and grab a health pack or some cover. The alleyways give extremely speedy routes to the middle of the map for faster pushing.

Checkpoints are on both sides of the map and include a round metal circle on the ground, where T.W.O. will stop for a breather, along with multiple levels of perches around them for defense or offense. Notably, New Queen Street has an overload of places to take cover, from taxi cars to random signs.

It’ll be deja vu for teams as they keep pushing T.W.O. around; the “end” of the map is the other team’s spawn point.

Since the mode itself is so new and chaotic, it’s difficult to tell which heroes will be the most helpful on Push maps, including New Queen Street. Thanks to this map’s infinite alleyways, stores, and places for cover, mobility will be extremely important. Heroes like Tracer, Soldier: 76, and D.Va will likely be able to herd flankers back to the main “path” of the map.

There’s also a decent level of verticality on New Queen Street, giving snipers a good foothold if the opposing team isn’t running a tank like Orisa or Reinhardt. Heroes that absorb or make use of incoming damage, especially Zarya, can turn all of those sneak attacks back at the opposing team.

While players will be tempted to gather around T.W.O. and sit on the payload (a decent enough strategy on certain base Overwatch maps), they should try to avoid that as much as possible here unless it’s an overtime push. New Queen Street is absolutely loaded with tiny nooks to hide in and staircases to climb. Get multiple members of the team out there to spring attacks and make space for the few who are left to defend the robot.