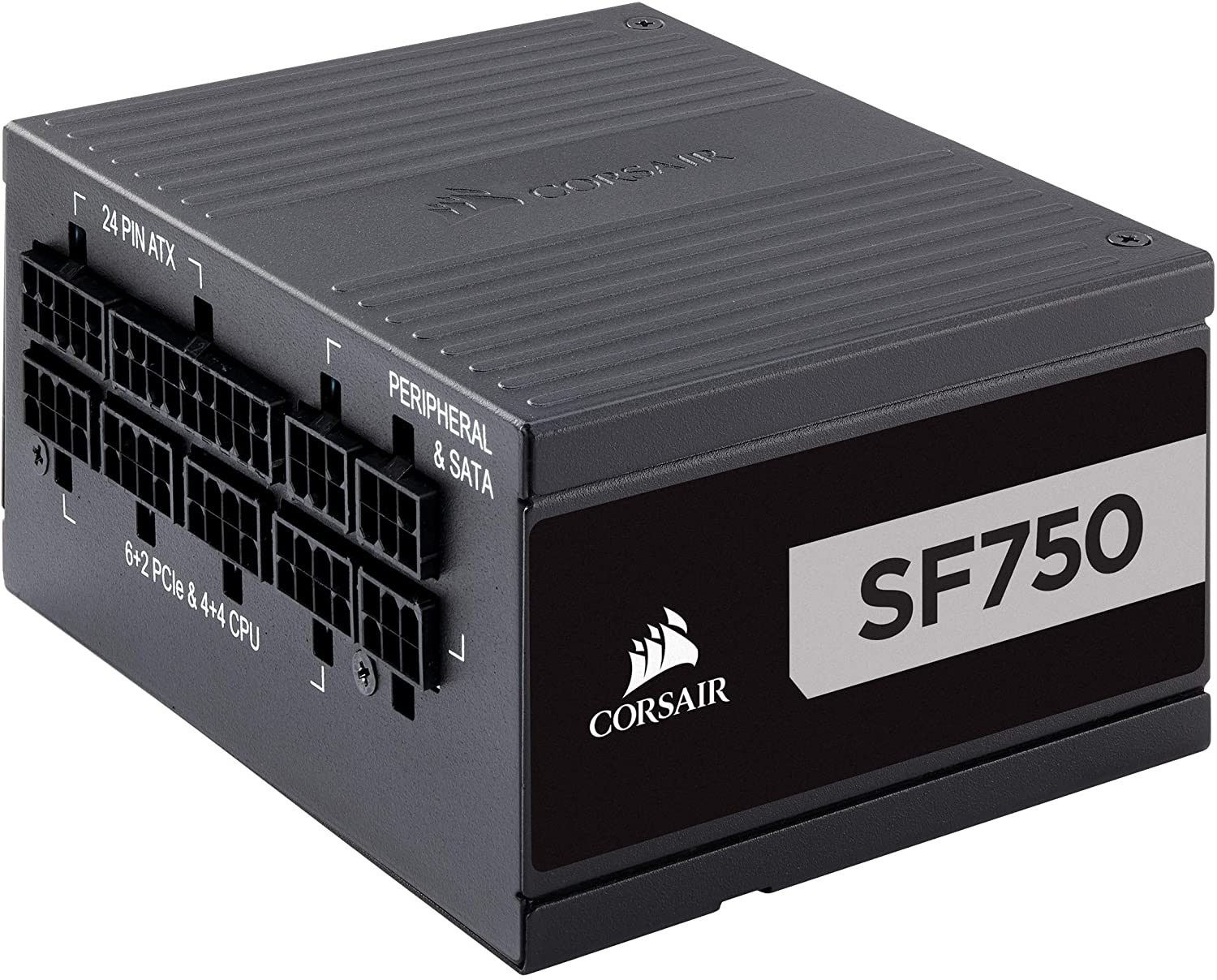 It’s possible to add ATX power supplies to some smaller cases, but their larger size and longer cables can take up too much space. Having less space means more heat and less room to add other components. Conversely, many SFX power supplies can be added to an ATX case using a bracket.

This power supply uses a larger fan to reduce noise. Entry-level SFX power supplies use smaller 80-millimeter fans that spin faster to keep the unit cool but can be noisy. Corsair uses a 90-millimeter fan in the SF750 that spins slower and makes less noise. The fan also has a semi-passive function and only turns on when it’s needed.

Users with larger cases can use the SF750 if they need to free up space. Corsair’s SF750 comes with a mounting bracket for ATX cases, and it has a modular design, so users only need to attach the cables their build requires.

The SF750 tops this list because it can power most SFX builds effieciently and also works in larger ATX cases. Its high price shouldn’t be a problem for buyers with a top-of-the-range PC, but it might be too much for users with older PCs who don’t need so much power.

Some characteristics of the 800W SFX-L are similar to the SF750. Both PSUs have a modular design and come with all the required cables. The SF750 also has a large fan with semi-passive functionality, but one on the 800W SFX-L is larger at 120 millimeters.

While the 800W SFX-L has an impressive power output, it’s too much for most small form factor builds. Since it doesn’t come with an adapter, users can’t mount the 800W SFX-L on an ATX case either. This power supply is only worth it for enthusiasts with advanced SFX builds. Everyone else is better served with the SF750 or one of the lower-power alternatives on this list.

Seasonic’s Focus SGX-650 650W is a mid-range power supply with enough power for most builds. It’s more affordably priced than the previously mentioned picks, but it still has many of the same features.

Like SilverStone’s 800W SFX-L, the Focus SGX-650 uses a 120-millimeter fan. Having a larger fan allows the power supply to provide more efficient cooling, and it also helps to reduce noise. Like the other fans on this list, it has a semi-passive design and only kicks in when it needs to.

One of the potential disadvantages of the Focus SGX-650 is its efficiency. Compared to the other power supplies mentioned so far, it only has an 80 Plus Gold rating. This rating means the power supply has 87-percent efficiency, whether operating on a 20-percent load or a 100-percent load. While the Focus SGX-650 is less efficient than the 800W SFX-L or the SF750, it also has a lower power output. A lower output means the difference in overall consumption is likely minimal.

While the Focus SGX-650 doesn’t have the highest output, it still boasts plenty of features to make it a strong contender. This PSU has an industry-leading warranty and enough power for most users. Unlike the 800W SFX-L, it also comes with a mounting bracket for ATX cases.

Users looking for an affordable PSU might consider the EVGA SuperNOVA 550 GM. Its power output isn’t enough for high-end builds, but it should be sufficient for mid-tier PCs.

EVGA’s SuperNOVA 550 GM is reasonably priced, considering its power output. It costs a fraction of the 800W SFX-L and SF750. It also competes with lower-output 450-watt power supplies when it comes to price.

Like the Focus SGX-650, it has an 80 Plus Gold efficiency rating. Users can expect 87-percent efficiency regardless of the load, but the lower power output means it draws less power than the alternatives listed here.

The SuperNOVA 550 GM has all the basic features to match the more expensive alternatives. It has modular design and comes with mounting brackets for larger cases. EVGA also includes a decent seven-year warranty, so users are covered if it fails.

This power supply is ideal for users who don’t want to spend much and don’t need the highest power output. While it will suffice for most small from factor PCs, users with high-end graphics cards will need something with more power.

The sounds of spinning fans can reduce immersion and distract users. SilverStone Technology’s SST-NJ450-SXL eliminates this issue with a fanless design that stays silent.

Unlike most power supplies, there are no ventilation holes. Instead, the whole unit is covered in heatsinks for cooling purposes. Apart from being surrounded in heatsinks, SilverStone Technology’s SST-NJ450-SXL works like a regular power supply. One side has the power connection port and the other has modular connections for the power cables.

Despite its innovative design, the SST-NJ450-SXL has one major drawback. It only has a 450-watt power rating, which limits its use. While it’s fine for entry-level to mid-range builds, it won’t handle the latest-gen graphics cards.

While the SST-NJ450-SXL’s innovative design provides a silent gaming experience, it doesn’t come cheap. This power supply has the lowest output on this list, but it’s in the same price bracket as the top-tier choices, like Corsair’s SF750.

There’s no doubt the SST-NJ450-SXL is a niche product. Most buyers will go for a higher output power supply, especially considering the high price. The SST-NJ450-SXL’s price tag limits it’s audience to those with money to burn and those looking for the quietest PSU on the market.