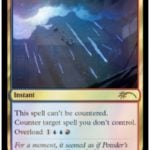 A total of four Magic: The Gathering cards showcasing artwork from the Netflix show Arcane were revealed today, along with basic lands in each of the five MTG colors.

Collaborating with Riot Games, Wizards of the Coast has created seven MTG cards and five basic lands, showcasing artwork from Arcane for Secretversary Superdrop 2021. Celebrating the two-year anniversary of Secret Lair, the four cards revealed today were Path to Exile, Unstable Harmonics, Counterflux, and The Hexcore.

Jayce is the focus of Path to Exile and is also featured in Unstable Harmonics with Viktor. Jinx, formerly known as Powder takes center stage with Counterflux. And The Hextech Core itself from Act two is the focal point of the Artifact, The Hexcore.

Related: All Easter eggs in Arcane act one

Three of the Arcane Secret Lair cards weren’t revealed to avoid spoilers for the final act that is scheduled to air via Netflix on Nov. 20. The names for those cards are Duress, Seize the Day that is now called Round Two, and Krosan Grip that is renamed to Denting Blows.

The Arcane MTG Secret Lair drops are scheduled to become available on Nov. 29 at 11am CT and are only available for a short time.