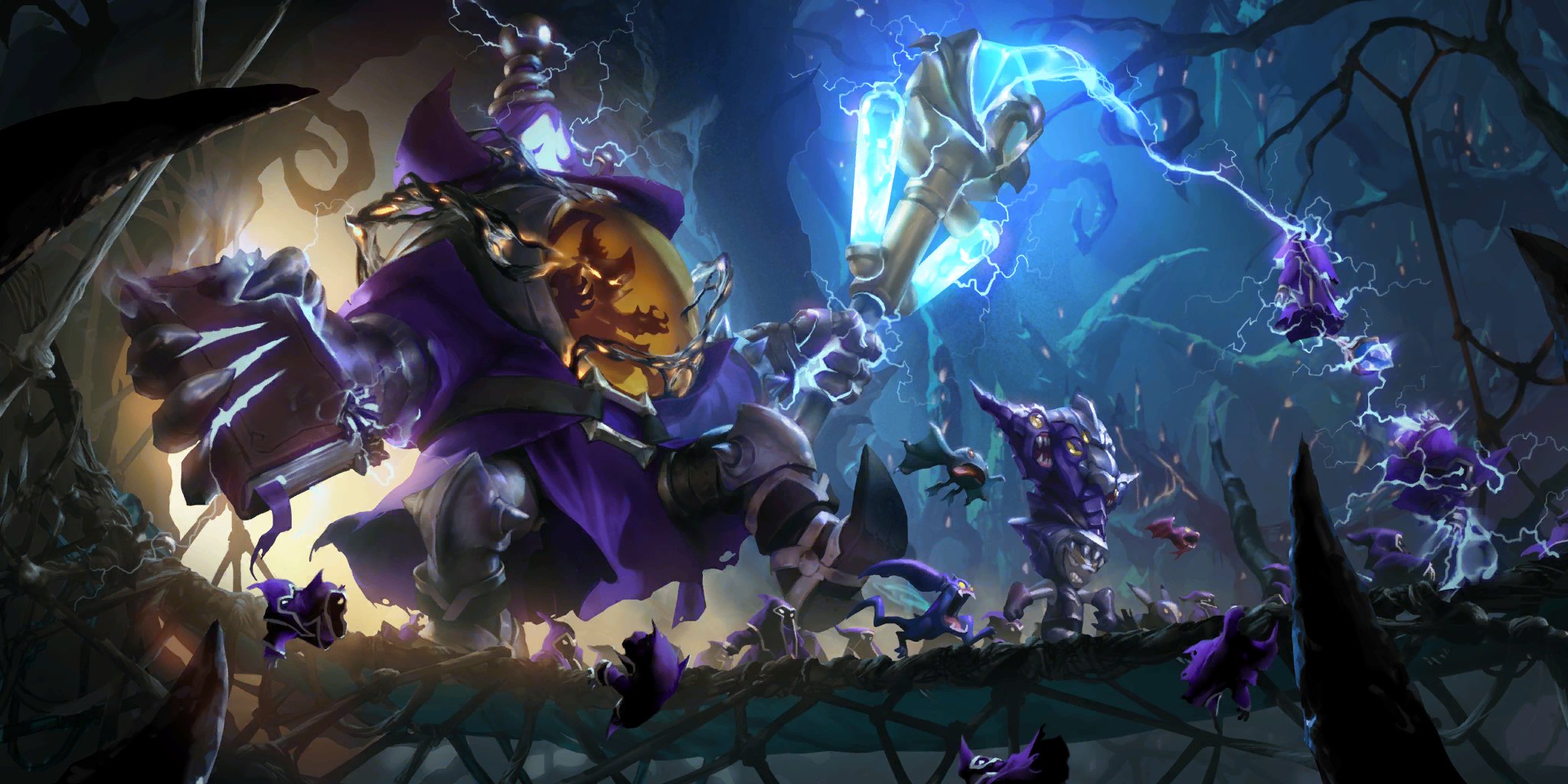 Veigar is the third champion joining Legends of Runeterra’s upcoming set, Beyond the Bandlewood, Riot Games announced today on Twitter and in collaboration with Mobalytics.

Veigar is a four-mana yordle champion from Bandle City and Shadow Isles with 1/4 combat stats and a summon ability that creates a Darkness in your hand if you do n’t have one. Darkness is an uncollectible three-mana slow spell that deals two damage to an enemy unit. At the start of each round, Veigar grants all of your Darkness everywhere one extra bonus damage. Veigar levels up after you’ve dealt a total of 12 or more damage with Darkness. 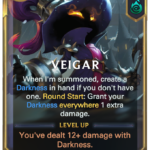 Once Veigar reaches his second level, he becomes Grand Overseer, gaining +1/+1 in combat stats and improving his Darkness generating ability to trigger at each round start. On top of more consistent Darkness, Grand Overseer Veigar has an aura ability that allows your Darkness spell to target anything.

In addition to Veigar’s reveal, Event Horizon, Darkbulb Acolyte, Tenor of Terror, Bass of Burden, Twisted Catalyzer, and Wizened Wizard were shown off in the teaser video today. Minimorph and Stilted Robemaker were also revealed separately from the video. 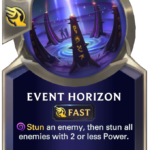 On top of being Veigar’s champion spell, Event Horizon is a fast five-mana spell from Bandle City that Stuns an enemy unit. Afterward, all enemies with two or less Power are also stunned.

Darkbulb Acolyte is a common two-mana yordle unit from Bandle City with a 2/2 stat line and the Augment keyword. When summoned, the Darkbulb Acolyte creates a Darkness in your hand if you don’t already have one.

Twisted Catalyzer is a common two-mana yordle unit from Bandle City with 3/2 stats and an ability that triggers when they strike, which grants your Darkness everywhere one extra damage.

Wizened Wizard is a common three-mana yordle unit from Bandle City that has 3/2 stats and an effect that activates at the start of each round and refills one of your spell mana.

Minimorph is a rare six-mana burst spell from Bandle City that transforms an enemy unit into a 3/3 Mini-Minitee and Silences it. Finally, Stilted Robemaker is a common four-mana yordle unit from Bandle City with a 3/4 stat line and a summon ability that reduces the cost of your Darkness everywhere by one.

Similar to the recently revealed Poppy, Veigar is another dual-region champion, which allows for more flexibility within deckbuilding. Despite this benefit, there’s no real reason to build Veigar outside of Bandle City because his most important followers that all interact with his specific spell, Darkness, are mono-Bandle City.

Ignoring the region pairing side of his potential, Veigar provides a potent tool for dealing with aggressive midrange boards. While his stats for his mana cost are far below average, he makes up for it with a way to threaten any valuable unit.

If the opponent fails to deal with Veigar, the constant ramping of Darkness damage will allow you to remove more formidable threats. Despite all of these strengths, Veigar does have easily exploitable weaknesses if the opponent looks out for them.

Since level one Veigar can only generate a singular Darkness when summoned, you’ll need to spend a lot of effort boosting its damage and hope your opponent can’t remove what you’re targeting. If your opponent can use spells to prevent Darkness from dealing damage like Glimpse Beyond, Single Combat, Nopeify, or Bastion, then you’ll need to use Darkbulb Acolyte or summon another Veigar to create a new Darkness.

Even with this glaring flaw, reaching level two Veigar makes up for it because being able to generate a Darkness every turn and send it to the opposing Nexus will end the game quickly. Grand Overseer Veigar is a win condition in and of itself and opponents will need to be mindful of how your Darkness is being scaled as you aim to achieve this goal.

Twisted Catalyzer and Darkbulb Acolyte are some of the most important pieces to this puzzle of Veigar becoming the Grand Overseer. Twisted Catalyzer is a fairly-statted unit for its cost and has the ability to boost your Darkness damage if left unanswered, all while easily being able to contest early boards.

Darkbulb Acolyte is another key factor to helping Veigar succeed since being able to generate and use Darknesses before the Tiny Master of Evil himself arrives means you’ll need to spend less time with level one Veigar on board.

The Stilted Robemaker is another strong potential synergistic card with Veigar. It reduces the cost of your Darkness everywhere by one, which makes them easier to cast in the mid to late game. But while Robemaker’s ability is useful, their combat stats for mana cost are below average, which makes them less than ideal if you’re unable to find your Veigar or Darkbulb Acolyte.

Wizened Wizard is a card that can find use outside of Veigar due to his round start ability, which provides you with a steady stream of spell mana. While it’s potent if left alive for many turns, the two health makes it susceptible to most removal options in the game.

Minimorph gives Bandle City a potent option to remove sizable threats from the opponent. While it’s expensive in nature, being able to transform any enemy, including champions, into a textless unit can be such a strong tool in the right meta.

If Anivia and other decks that focus on reanimating high-value cards become popular enough, Minimorph allows you to systematically erase them at a speed that can’t be interacted with. While this sounds daunting and difficult to deal with, this card is effectively worthless against aggressive lists that don’t feature many high-value threats.

Event Horizon is a stall tool that Bandle City can use if hyper-aggressive decks that focus on using multiple weak units overrun the meta. Being able to play Event Horizon at fast speed allows you to react to opponents when they declare their attack to find optimal stun targets.

When Tenor of Terror is able to activate his ability, he’s effectively a 5/5 unit for four mana split across two bodies. While splitting units up into easily removable stats like 2/3 and 3/2 can normally make them vulnerable to removal, this can be a strength on offense because being able to activate the Impact keyword twice allows you to deal lots of stray damage.

Veigar will join the Bandle City/Shadow Isles champion roster when LoR: Beyond the Bandlewood goes live on Aug. 25.