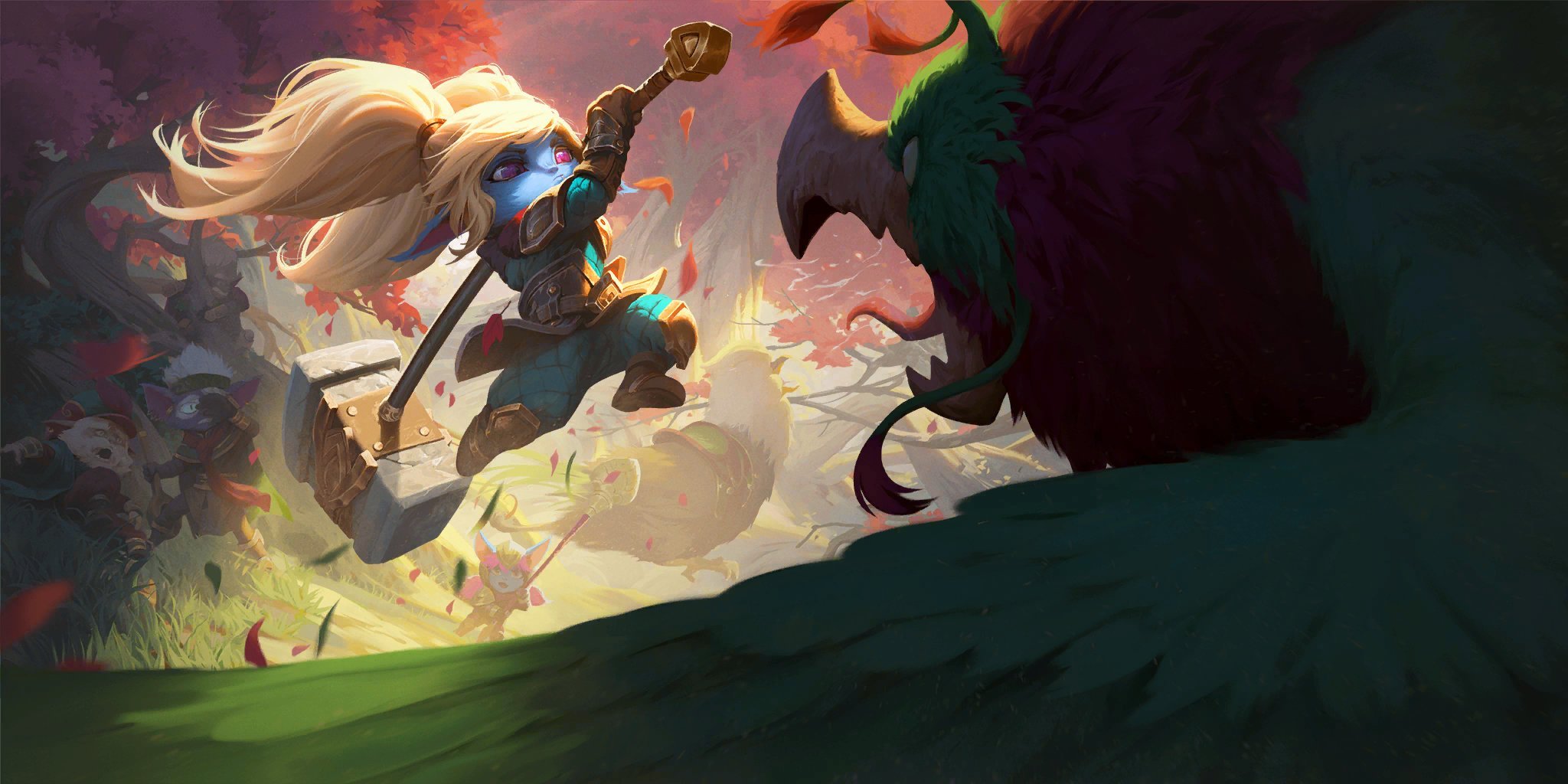 The first champion joining Legends of Runeterra’s upcoming expansion, Beyond the Bandlewood, has been revealed. Poppy is coming to LoR, Riot Games announced today on Twitter and in collaboration with Mobalytics.

Poppy is a four-mana yordle champion from Bandle City and Demacia with 4/3 combat stats and a potent buff ability. Whenever she declares an attack, Poppy grants herself and all allies with equal or less power than her a permanent +1/+1 buff. Poppy levels up after she’s declared attacks with allies three different times. 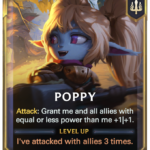 Once Poppy becomes level two, she gains +1/+1 in combat stats, the new Impact keyword, and improves her attack ability into a permanent +2/+2 buff and grants herself and her allies the Impact keyword too. If you can grant Poppy a buff with cards like Field Promotion, she can accelerate her progress to reach level two much more quickly.

As the first entirely new collectible dual-region champion, Poppy can make herself fit into a deck primarily featuring either Demacia or Bandle City. If she aligns with Demacia, she can rely on effects that rally, like Relentless Pursuit or Golden Aegis.

While all of the Bandle City cards have yet to be revealed, Poppy can find synergies with cards like Stone Stackers or Babbling Balladeers. The main goal you need to strive for with Poppy is amassing a wide board with units that have four or less power by the time round four rolls around. A permanent +1/+1 board-wide buff can destroy an opponent if they’re unable to react properly.

While Poppy can snowball out of control if she’s unanswered, her three health is a moderately noticeable weakness that makes her prone to removal or getting traded with. Despite this downside, if Poppy is able to declare an attack, her health will continue to scale upward, making her more difficult to remove in the future.

When Poppy reaches her second level, the ability to continually stack the Impact keyword allows you to deal damage to the enemy Nexus even if you’re blocked each time you swing. But Poppy must declare attacks with allied units for her to gain credit toward leveling up. If your opponent can remove your board before she arrives, then evolving her will become more difficult. 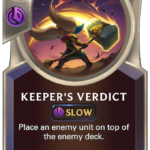 Keeper’s Verdict, aside from being Poppy’s Champion spell, is a rare six-mana slow spell from Bandle City that places an enemy unit on top of the enemy’s deck.

Yordle Ranger is an epic six-mana yordle unit from Bandle City and Demacia with 5/5 combat stats with the Scout keyword. Whenever she declares an attack, the ranger grants herself and all allies with equal or less power than her a permanent +0/+1 stat buff.

Pompous Cavalier is a rare three-mana yordle unit from Bandle City and Demacia with a 1/1 stat line and the Double Attack keyword.

Yordle Smith is a common two-mana yordle unit from Bandle City with 2/2 stats and an attack ability that gives all allies with equal or less power than himself Quick Attack temporarily for the round.

Stress Defense is a common three-mana burst spell from Bandle City that sets a unit’s stats to 1/6 for the round.

Heroic Charge is a rare five-mana slow spell from Bandle City that has an ally strike an enemy. If the enemy survives the damage, it’s stunned for the round.

Yordle Squire is a common one-mana yordle unit from Bandle City with a 2/1 stat line and a Play ability that allows you to create a Tiny Spear or Tiny Shield in hand. Both Tiny objects are one-mana focus speed spells that grant an ally a +1/+0 buff if you select the Spear or a permanent +0/+1 buff if you choose the Shield.

The new mechanic that strengthens units depending on the “leader’s” power allows you to carefully consider which units to play to provide a chain of powerful buffs.

While Genevieve is a direct comparison to Yordle Ranger since both are six-mana Scout units, the new ranger serves a different role. Since Yordle Ranger provides more permanent health buffs and is more sturdy, she can allow you to protect the wide boards you’ll be attempting to swing with.

Pompous Cavalier is another dual-region card that can snowball if he’s left unanswered due to his Double Attack keyword. While he can deal a ton of damage if he’s buffed, his one health will make it difficult for him to reach a dangerous range.

Yordle Smith gives your allies a chance to protect themselves when swinging with Quick Attack. While this keyword is effective to place on your allies, if your units have weak stat lines, Quick Attack will be less efficient.

Stress Defense serves two purposes since you can target any unit with its ability. You can either protect your low-health ally that’s about to be removed or reduce the stat line of an enemy unit.

Heroic Charge is a new strike spell that serves a different use than every other one in the game, like Single Combat or Concerted Strike. Since this one is slow, expensive, and non-symmetrical, you can either try to destroy a sizable threat or temporarily remove it with Stun.

Yordle Squire is a potent premier one-drop follower from Bandle City that can carry the region. Since she creates a card, she synergizes with the recent reveals that focus on adding cards to your hand, like Hidden Pathways or Yordle Newbie.

In addition, if you place her in an aggressive deck, the created Tiny Spear or Shield can be used as fodder for discard effects. The one health or one power boost can also lead to your future units reaching powerful breakpoints. Sometimes, an extra health point can save units from certain removal spells that can break a game wide open.

While a permanent buff is powerful, one weakness with the Tiny Spear and Shield is that they’re both focus speed. This means after your squire creates either one or you summon a unit, your opponent can cast a spell or start an attack and you won’t be able to use either one immediately after you perform an action.

Poppy will join the Bandle City/Demacia champion roster when LoR: Beyond the Bandlewood is released on Aug. 25.