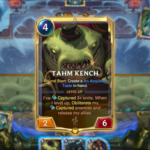 Riot Games introduced the first champion for Legends of Runeterra’s Monuments of Power expansion today, Tahm Kench from Bilgewater—and he builds upon the capture mechanic from Demacia.

He’s a four-cost champion unit wielding two power and six health with a round start ability that creates An Acquired Taste in hand. An Acquired Taste is a slow two-mana Fleeting spell that lets you select an enemy unit to strike your Tahm Kench and he captures it afterward. Tahm Kench reaches his leveled form when he’s captured three different units, whether it be ally or enemy units. Upon leveling up, he’ll also Obliterate any captured units within him and release any captured ally units.

Tahm Kench’s leveled form is also four mana with +1/+1 in stats and the same round start ability. Tahm Kench’s ability that activates when he levels up is now an Attack ability, Obliterating devoured enemies while releasing his devoured allies.

Demacia will likely be the primary region that tries to pair up with Tahm Kench. Since Demacia is the only other region with capture, through Detain and Mageseeker Investigator, the region will allow him to find more opportunities to consistently level up.

Outside of Demacia, Tahm Kench may find appreciation and synergy within Freljord as a region as well. Freljord, as a whole, has a ton of combat health buffs that will assist him in leveling up since he’ll be taking damage from devouring enemies. Aside from health buffs, it’s also the only region that can grant the Regeneration keyword through Augur of the Old Ones. This adds extra consistent healing to Tahm Kench after devouring big enemies. Additionally, Freljord also has Stalking Wolf, which can spawn a weak Snow Hare that Tahm Kench can devour with relative ease.

Tahm Kench will join the champion roster when LoR: Monuments of Power drops on PC and mobile on Oct. 14.