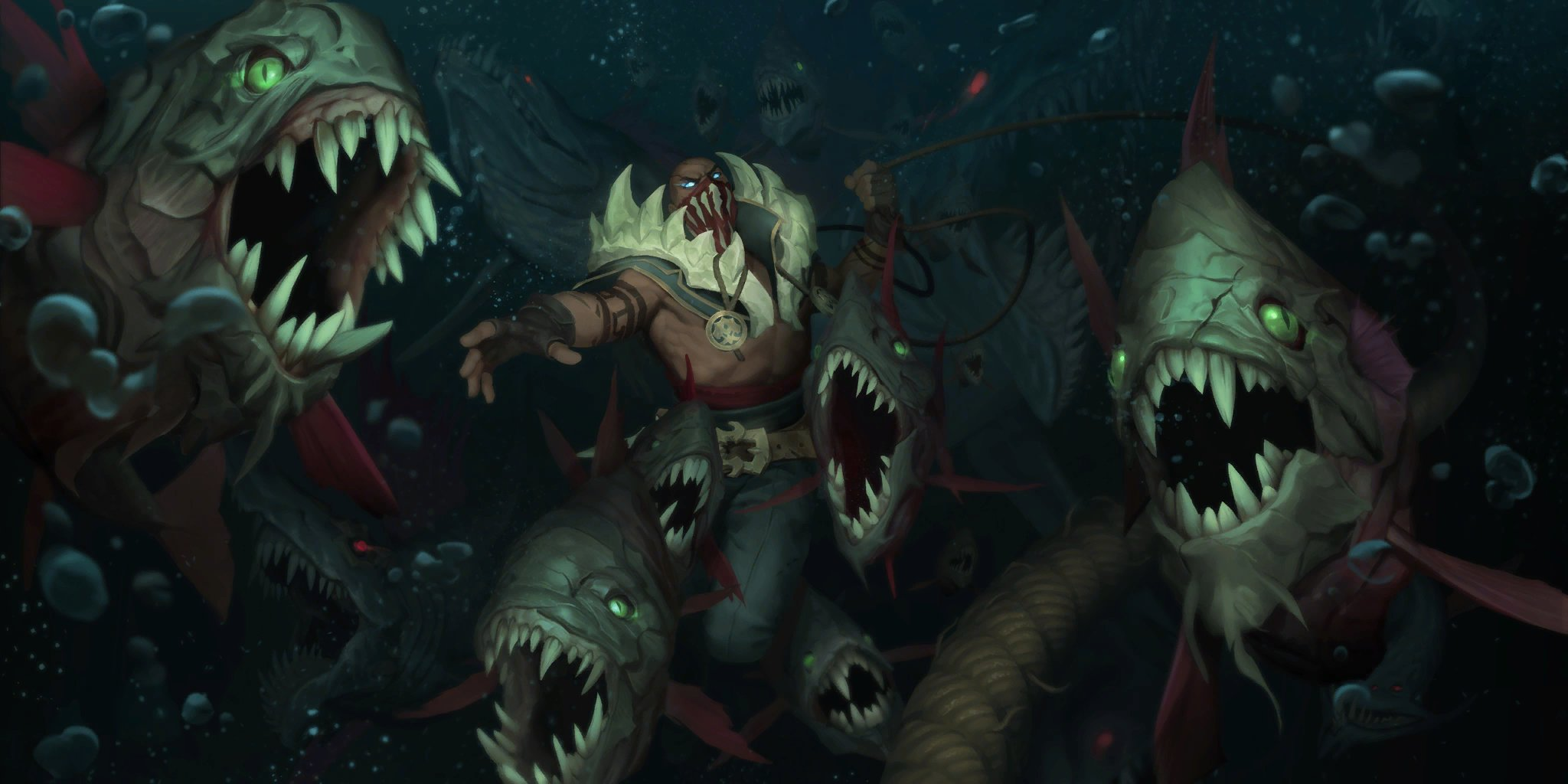 Riot Games has unveiled the second of three champions to join Legends of Runeterra: Rise of the Underworld. Today, during the Seasonal Tournaments, the developer showed off Pyke, and similar to Rek’Sai, he will build on the recently revealed Lurk mechanic.

Pyke is a four-mana 2/3 Lurker champion unit with the Quick Attack and Lurk keywords and a unique ability. When you declare an attack while Pyke lurks on the top of your deck, he transforms himself into Death From Below. The spell that he becomes is a four-mana Fast speed spell with the Lurk keyword that summons a Pyke and then he strikes an enemy. Pyke levels up after 15 damage has been done through Pyke-related means. 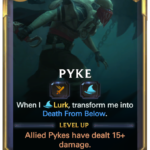 Upon leveling up, Pyke gains +1/+1 in combat stats and keeps his Lurk keyword and transformation ability. The newest effect Pyke gains when reaching level two is that after he kills an enemy, he Strikes the weakest enemy.

Pyke’s an interesting champion to evaluate due to his ability to change from a unit into a Fast speed spell that can remove opposing threats. Death From Below is similar to Tri-Beam Improbulator if it were Fast speed instead of slow. Since Pyke deals the damage, you will need to successfully Lurk a couple of times to make Death From Below’s damage reach meaningful breakpoints to actually remove threats.

Pyke synergizes well with Vulnerable due to how it combines well with Vulnerable, which Shurima does well in addition to the recently revealed Bilgewater cards. Similar to other Lurker units, his base stats are less than ideal for their mana cost, but once enough Lurks were triggered, he will become a formidably aggressive card.

Once he levels up, he resembles his League of Legends counterpart thanks to his ability to set up multiple chain kills with his new ability. If your opponent has a chain of damaged enemies, you can easily wipe out an opponent’s board after Pyke slays an enemy at a speed that cannot be reacted to.

For opponents to counter this, they need to have their low attack units have higher health than Pyke’s attack, otherwise their units will be removed. But this will be difficult to play around once enough Lurk triggers are activated.

Keep in mind that Pyke doesn’t need to kill an enemy through conventional combat to begin his execution chain. If he slays an enemy thanks to a spell, like Death From Below or Bone Skewer, then the opponent will have to suffer his ultimate ability.

Aside from Pyke, three other cards were revealed during the other regional Seasonal Tournaments: Jaull-Fish, Sacred Protector, and Swiftwing Flight. 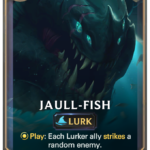 Jaull-Fish is an eight-mana Epic Lurker Unit with 2/7 combat stats, the Lurk keyword, and a skill that activates when played that has Each Lurker ally strike a random enemy.

Jaull-Fish stands as the most expensive Lurker unit and serves as an extra way for Lurkers to clear boards in the late game. While it is unknown if Jaull-Fish’s skill is split up into multiple triggers (like Riptide Rex) or a singular activation (similar to Basilisk Bloodseeker), this massive Lurker will be an exciting high curve option for those that want to build a well rounded Lurk-style list.

One potential downside for Jaull-Fish is that it has the chance to miss out on specific units due to the random nature of its ability.

Shen lists have been a powerful midrange deck contender ever since his buff a long time ago. Whether he pairs up with Fiora or with the recently buffed Jarvan IV, Shen decks could destroy any foe tactically through combat thanks to Barriers and other combat tricks.

With Sacred Protector, the ability to consistently draw Shen, and then give your units Double Attack means you have another late-game threat to reach out for.

Swiftwing Flight is a four-mana Epic Elite Unit with 3/2 stats, the Challenger keyword, and a Play ability that lets you create a Silverwing Vanguard, Blinding Assault, or a Fleetfeather Tracker in your hand. In addition to this, it has an ability that activates when attacking that temporarily grants your other Challenging units +1/+1 for the round.

While low in stats, Swiftwing Flight is an interesting toolbox card that lets you gather different units which can help you out in varying scenarios. Despite this versatility, all of the cards that can be generated all aim to do the same thing, Challenging units. This means that there’s not enough diversity aside from stats and cost from cards you can generate.

Swiftwing Flight’s other important aspect is its ability to boost your Challenger-based boards. The temporary +1/+1 buff can allow your stronger units to survive more combats, and gives your weaker units a chance to trade upwards.

Pyke will join the Bilgewater champion roster when LoR: Rise of the Underworld releases June 30.