The reveal season for Legends of Runeterra’s next expansion, Rise of the Underworld, is moving into Bilgewater. In today’s teaser, Riot Games, in collaboration with Mobalytics, revealed five new cards from Bilgewater: Redfin Hammersnout, Bloodbait, The List, Ripper’s Bay, and Sharkling.

This cycle of cards continues to support the recently shown off Lurk mechanic. Lurker units gain a permanent +1/+0 whenever you declare an attack when a card with Lurk resides on top of your deck. 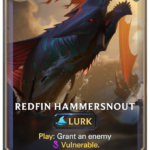 Redfin Hammersnout is a common two-mana Lurker unit with 1/2 combat stats, the Lurk keyword, and an ability that activates when played that grants an enemy Vulnerable permanently.

Bloodbait is a common one-mana Burst speed spell that creates a Snapjaw Swarm on top of your deck. In addition, it has the Lurk keyword. Snapjaw Swarm is the Lurker unit that was initially revealed with a 0/2 stat line and a play effect that starts a free attack.

The List is a rare zero-mana Slow speed spell that grants an enemy unit Vulnerable. If the enemy unit already has the Vulnerable debuff, then your strongest ally starts a free attack challenging it.

Sharkling is a common one-mana 1/2 Lurker unit that simply uses the Lurk keyword.

All of the Lurker units revealed today revolve around the Lurk mechanic and have interesting ties to Vulnerable to help them succeed.

Being able to manipulate your deck’s order and gain free combats on turns where you lack the attack token will allow you to find success with the new keyword. Bloodbait is a good example of this since it puts a Lurk card on top of your deck. Once you draw it, you can perform an attack on a turn where you’re unable to swing, boosting your future Lurker units.

One major downside to consider with Bloodbait is that it locks you into your next draw. So if you’re desperately behind, the Snapjaw Swarm may put you into a position where your opponent can knowingly punish you.

The List, which is an important aspect to Pyke’s lore, is comparable to Demacia’s Cataclysm. You can get a free combat that allows you to activate your specific attack triggers, which Lurk is reliant on, and allows you to remove high-value units from the opposite side of the board.

Right now, most of the potent Vulnerable granters lie in Shurima, in the form of Merciless Hunter and Rock Hopper. While Bilgewater already has some cards that grant Vulnerable, they’re fringe cards and don’t synergize with Lurk. The fact that Pyke’s followers can rely on Shurima is a big boon for the new mechanic.

Redfin Hammersnout is a new Vulnerable-granting card that could allow the new archetype to succeed. As with most Lurkers, its initial combat stat value is terrible. But if you manage to activate Lurk bonuses throughout the game, its stat line becomes stronger for its cost.

Ripper’s Bay continues the trend of giving non-unit cards the Lurk keyword. Since the Landmark helps improve your odds by removing non-Lurk cards from the top of your deck, Ripper’s Bay gives your Lurker units a chance to constantly gain boosts.

When compared to Xer’Sai Hatchling, Sharkling trades away the potent Fearsome keyword for one extra health. While the one extra health helps it avoid ping-type scenarios, this leaves it open to be chump blocked by weaker units from the opposite side of the board.

This may sound terrible for Bilgewater’s one-mana unit, but it could still find a spot in future Lurker-styled lists to improve the odds of having a Lurk card on top of your deck. The one extra health will also be favorable in control-heavy metas where decks may lack early units.

Since Bilgewater was revealed today, it’s safe to assume that Pyke’s reveal is coming shortly.

You can test these cards and more when LoR: Rise of the Underworld becomes available on June 30.