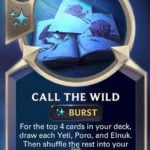 Legends of Runeterra’s second expansion, Call of the Mountain, reveal season is continuing on through the weekend. In today’s announcement on Twitter, Riot Games revealed six new collectible cards and a new keyword, Behold.

The six cards revealed are Face of the Old Ones, Troll Scavenger, Troll Ravager, Uzgar the Ancient, Troll Chant, and Call the Wild. The new mechanic Behold gives you bonus effects if you either have a type of card in play or in your hand. Hearthstone players may find familiarity in this new keyword with the “if you’re holding a Dragon” mechanic.

Troll Ravager is a four-mana 3/5 unit that gains Regeneration when he’s summoned if you Behold an 8+ cost card. Uzgar the Ancient is an eight-mana 7/7 unit that has Challenger and Regeneration.

Faces of the Old Ones is an alternate Wyrding Stones that players can rely on for mana ramp a turn earlier. The downside to playing this is that it has less bulk and requires you to be holding an expensive eight-mana card. Troll Scavenger and Troll Ravager are some early drops with fair stats and keywords for their cost if you can consistently activate their behold effect. Uzgar the Ancient is an expensive drop that can contest and safely remove most units every single turn due to his Regeneration and Challenger abilities combined. Troll Chant is a potent combat trick that can turn the tide of any even battle due to its ability to have a four-stat combat swing for only two mana. Call the Wild brings up interesting implications as it’s the first Elnuk support that’s a spell, and it combines with both Yetis and Poros. This could mean that more Elnuks are potentially coming this set.

Based on previous analysis, this teases that Trundle will be revealed tomorrow, as all of these cards are Freljord and Troll themed. If we’re continuing speculation, we can expect Trundle to be an expensive and powerful unit to tie the whole Behold mechanic together.

Become troll royalty when these cards and more are dropped when LoR: Call of the Mountain officially releases for PC and Mobile on Aug. 26.