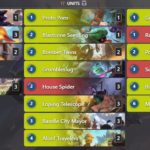 Gnar has taken over the Legends of Runeterra meta following the release of the A Curious Journey expansion, playable in a variety of decks at all ranks.

Following the release of A Curious Journey, Gnar has quickly become the best champion out of the four LoR champions within the expansion. The transforming Yordle is a multi-region champion via Bandle City and Freljord. Gnar synergizes with each of his LoR regions, along with Demacia, Piltover & Zaun, Bilgewater, and even Shurima. His versatility has made him one of the most played champions since the launch of A Curious Journey.

Leveling up Gnar is different from other LoR champions since his transformation takes place upon damaging the enemy Nexus by the end of the round. Upon leveling up, the transforming Yordle hits the strongest enemy unit with Vulnerable. And at the end of an attack round, he transforms back into level one Gnar. He also creates a Pokey Stick upon Strike at level one and reduces the two-cost Bandle City Fast spell by one if you already have one in hand. 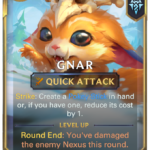 From Gnar and Akshan Shurima to Gnar and Trundle Piltover & Zaun, here are the best LoR Gnar decks at Master rank following the release of A Curious Journey.

The original Concurrent Timelines deck was created by the Pro player 4LW. Adding Gnar to the list helped the Brazilian LoR tournament winner rank up from Platnium to Masters with a 70 percent win rate. Concurrent Timelines is a P&Z Slow spell at one mana that lets you transform one of three followers at the same cost from any LoR region after you play a follower in that round.

Pairing Concurrent Timelines with Ice Pillar refills your mana and lets you essentially play an eight-cost champion from any region for free. Gnar improves upon the existing build by providing solid offensive and defensive stats during the midgame while enabling removal and card advantage via Pokey Stick.

Created by LoR Pro Jordan “XxWhatAmIxX” Abronson, the build replaces Sivir with Gnar and produces a solid combo via the new A Curious Journey card Papercraft Dragon and Ruin Runner. XxWhatAmIxX hit rank one Masters with AdmiralAKGnar, showcasing the variety of solid gameplay options that the deck offers.

Playing Akshan on turn two is important against Midrange and Control LoR decks while Gnar fuels the midgame with what he does best. An Inventive Chemist on turn one can trigger a Gnar level up on turn four while the two-cost Shurima Burst spell The Absolver can simply end games.

Created by Kuvira and played by LoR tournament player FloppyMudkip to earn their fourth Fight Night title, the Fizz and Gnar Yordles in Arms deck features similar gameplay to the Lulu version and has a 60.97 percent win rate at Masters rank. Players can take full advantage of the five-cost Yordles in Arms Slow speed spell via multiple multi-region cards within the build, buffing the team by +4/+4 during the round it is played.

Gnar creating Pokey Sticks synergizes nicely with Fizz in addition to ping effects and card draw. Boom Baboon is still a solid card to play on turn two, enabling card draw and a Flame Chompers! on the battlefield by turn three via Zaunite Urchin. And spells like Get Excited! and Mystic shot can deal lethal damage if Yordles in Arms doesn’t get the job done.

The Gnar Bandle Tree version has removed Fizz as a champion in exchange for Gnar and Kennen. Both are multi-region champions, synergizing with the Bandle Tree shell, while adding additional value to grind out long games until the specifications for The Bandle Tree are met.