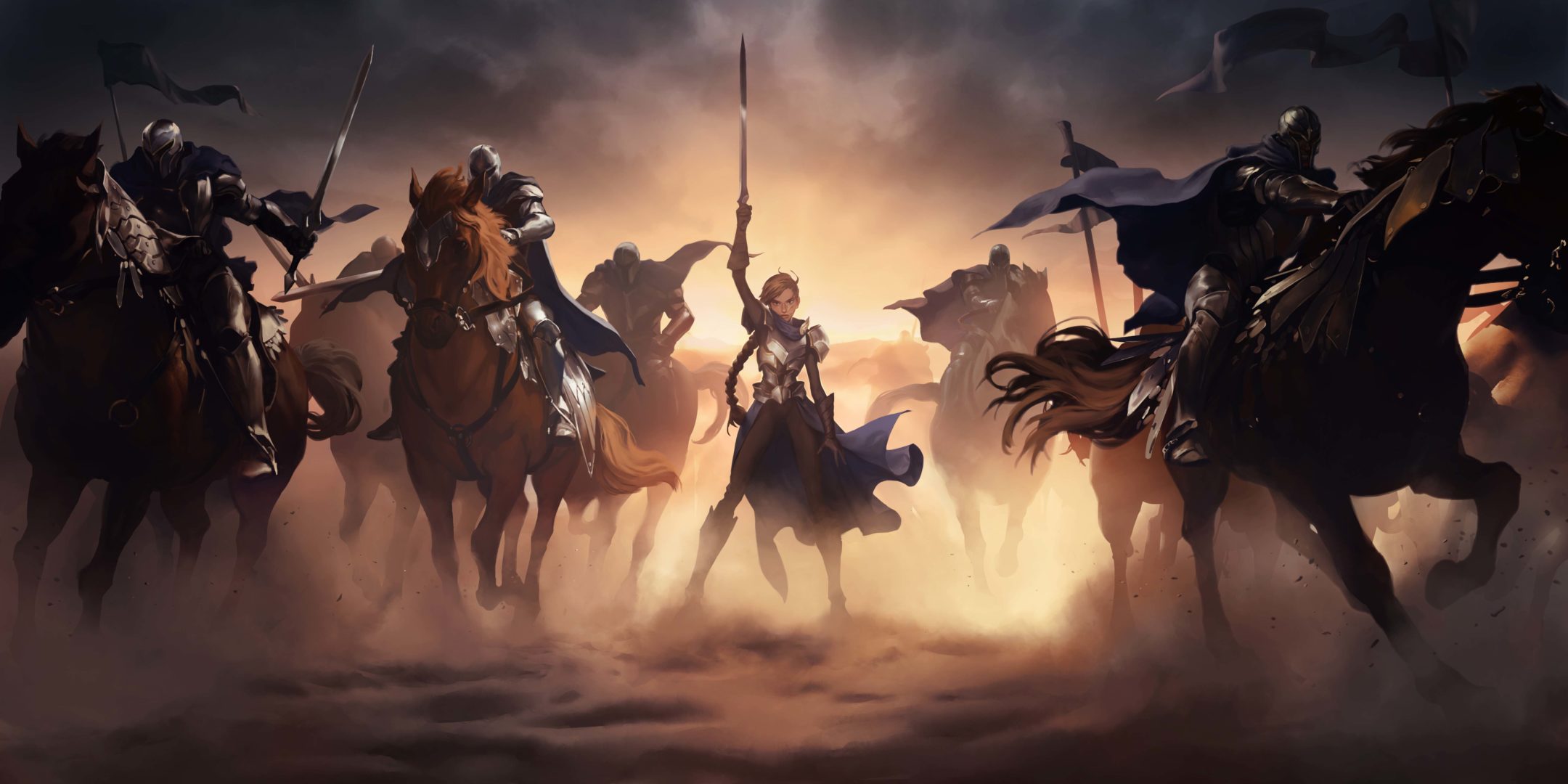 The digital card game Legends of Runeterra contains a total of four sets, spanning a large number of keywords and mechanics.

New cards are constantly getting added to LoR via expansions to existing sets, adding new keywords and mechanics each time. Players can check the definition of a keyword during gameplay by right-clicking on the card with the keyword and then mousing over it. Keywords and mechanics within LoR are the foundation of the card game itself, providing actions and effects to champions and followers.

Many of the keywords on champions have support from followers and spells that have the same keyword or thematically support it via another mechanic or keyword. There are over 100 types of actions, mechanics, effects, and keywords within LoR. The following list is in alphabetical order, containing the most important keywords and mechanics. Each time a new set or expansion is released by Riot, the LoR keyword list will get updated.

Here are the main LoR keywords and mechanics from every set and expansion.

Advance: Decreases the countdown by a certain amount on Landmarks.

Allegiance: A card with this effect will activate if the top card of your deck also comes from the same region. Instead of race or class, LoR groups cards by using the regions in Runeterra, allowing for varied playstyles even if the deck is mono-region.

Attune: When a card with Attune is summoned, refill one spell mana. This is a much more subtle keyword than others. This allows you to weave in more cheap spells by giving your units an effectively soft rebate when they’re summoned. Players looking to combo more cards together in one turn should turn to this new keyword.

Augment: The LoR keyword Augment grants any follower or champion with the keyword +1/+0 when they see you Play a created card.

Barrier: Negates the next instance of damage taken. It’s like Hearthstone’s Divine Shield but only lasts for one round instead of until it’s popped.

Behold: Cards with Behold activate their bonuses if you’re holding a specific card or have it in play.

Challenger: Choose which enemy unit to block the Challenger. Due to LoR’s distinct positional advantage for defenders, good Challenger usage can really throw a defensive strategy out of control.

Daybreak: The fourth keyword revealed with LoR: Call of the Mountain. Solely a Targon mechanic, Daybreak cards activate their effects if they’re the first card played within a turn. Rahvun, Daylight’s Spear can allow you to chain multiple Daylight cards together in the same turn.

Deep: When your deck has 15 or fewer cards, gain +3/+3. This keyword is found in the depths of Bilgewater. It wants you to play longer games than average to get massive value from these large units. Synergizing well with the Toss keyword, you’ll want to make sure you empty your deck as soon as possible to run over your opponents with this mechanic. If cards are added to your deck after you activated the requirements, you’re still considered Deep after the fact.

Double Attack: Strike before and during an attack against its blocker.

Enlightened: Activates only when you reach 10 max mana. Players gain a max mana gem every turn and there are cards that provide the player with empty mana gems.

Elusive: Elusive characters in LoR can be targeted by offensive spells and attacks, but can only be blocked by other Elusive units when attacking. It’s more like Magic: The Gathering‘s Flying and not like Heathstone’s Stealth or the unofficial Elusive term in that community.

Ephemeral: The unit dies when it attacks or after the end of the turn.

Fated: When a unit you control is targeted by a spell you cast or an effect from an ally you control, the unit receives +1/+1 stats.

Fearsome: Can only be blocked by enemies with three or more power.

Frostbite: Sets a unit’s power to zero. Even during the same turn, the value can be increased by using spells or effects.

Fleeting: Fleeting cards are discarded from the hand at the end of the round. This means you need to make sure you have the mana to spend them, otherwise you’ll lose the card.

Formidable: A unit with Formidable applies its toughness stats as its power upon attacking. A unit with 0/8 stats that attacks and has the LoR keyword formidable, attacks as an 8/8.

Fury: The final keyword revealed with LoR: CotM, Fury has been introduced as a mechanic found solely on Dragons. Units with Fury increase their stats by +1/+1 whenever they kill another unit. This can be done through spells that induce battle, like Single Combat.

Invoke: This was the penultimate keyword revealed for LoR: CotM’s release. Cards with Invoke allow you to select a powerful Celestial card out of three choices to add to your hand. There are 22 total Celestial cards that can be obtained, one unit and one spell for each mana cost from zero to 10. Some Invoke cards can search for Celestials cards of specific costs.

Landmark: A Landmark is an LoR card type that takes up space on the battlefield and can’t attack or block.

Last Breath: An effect takes place upon the unit dying.

Level up: All champions require a certain specification to get met in order to advance to their next level.

Lifesteal: Damage dealt by this unit heals the Nexus, not the card.

Lurk: Lurk is triggered via attacking. If the card on top of the top of your deck has Lurk when an ally attacks, all Lurkers everywhere are granted +1/+0. This effect can only take place once per round.

Manifest: Manifest allows a player to look at three random non-champion cards and choose one to put in their hand.

Mill: Milling cards from your deck or an opponent’s deck will remove cards from play.

Nab: While it wasn’t originally a keyword with LoR: Rising Tides’ release, it was made into a keyword in a later patch when it got reworked. Nab draws a non-Champion card from the bottom of the enemy deck.

Nexus Strike: The effect triggers when the unit attacks the Nexus. You can’t actually target the Nexus with an attack, so it’s not as easy to activate as it sounds.

Nightfall: Another keyword revealed with LoR: CotM. Introduced in Shadow Isle and Targon, Nightfall cards gain their bonuses as long as they aren’t the first card that you played in a turn.

Obliterate: Completely remove from the game. Cards that are obliterated don’t have their Last Breaths trigger and can’t be revived from the graveyard.

Overwhelm: Excess damage dealt by the unit will spill over to the Nexus, like in Yu-Gi-Oh!

Play: The act of dragging a card from your hand to put a unit on the battlefield or cast a spell.

Plunder: A card triggers its Plunder ability when played from hand if you damaged the enemy Nexus this round. Featured primarily in Bilgewater and Freljord, this new keyword promotes aggressive strategies by forcing you to deal damage to get maximum value from these cards. Plunder can trigger from both combat and effect damage. Even odd damage, like Teemo Shrooms activating, can set up a Plunder trigger.

Quick Attack: Strike first before its blocker, but only during the attack phase, not blocking. The splitting of an offensive and defensive phase means some effects are only applicable in certain phases. Usually, units clash at the same time and both will take damage. Quick Attack means that cards will attack before their opponent does. If the Quick Attack unit kills its opponent, the unit doesn’t take any damage. This is a powerful offensive ability that allows glass cannons to survive battles.

Rally: If you don’t have an attack token, gain one. Previously, this wasn’t a keyword. But since enough cards had this effect, it was added into the game to classify it more easily. Rally can happen during either player’s turn. If it’s during your opponent’s turn, you gain a surprise round of attacks. If you do it after you declare an attack, you get a second set of attacks during your same turn. You can Rally any amount of times during the same turn. If your board is full, this can be one of the most lethal keywords in the game.

Regeneration: Units that have the LoR keyword Regeneration heal to their maximum health at the end of a round or Round End.

Scout: The first time only Scout units attack each round, ready your attack. This gives you a Rally-like effect if you can build your board to be Scout-only. If your board has a mix of non-Scout units with Scout units, you can always send in only your Scouts first to gain an extra attack with them later.

Slay: Killing an ally or enemy with a spell or combat damage credits the LoR keyword Slay. Units that self-destroy via Ephemeral don’t count towards Slay.

Strike: A unit will Strike upon dealing damage to its target. Units with zero power can’t Strike, unless it has the LoR keyword Formidable via Support.

Support: Attacking with a support unit will buff the unit to its right. It only applies when the unit is attacking, not all the time.

Spellshield: The first keyword revealed with LoR: CotM. A unit with Spellshield is unaffected the first time it’s targeted by an opponent spell or ability.

Toss: Obliterate X non-Champion cards from the bottom of your deck. This destroys parts of your deck to increase the odds of finding your Champions easier. Be careful with how often you use Toss, though. If you attempt to draw from an empty deck, you’ll lose. Toss enables strategies with the newest Shadow Isle champion, Maokai.

Tough: Units and a player’s Nexus with Tough take one less damage.

Vulnerable: Units that are made Vulnerable can be challenged by enemy units, forcing them to block it. This allows you to take cards that often don’t want to block, like Elusive units or Heimerdinger, and destroy them in combat.