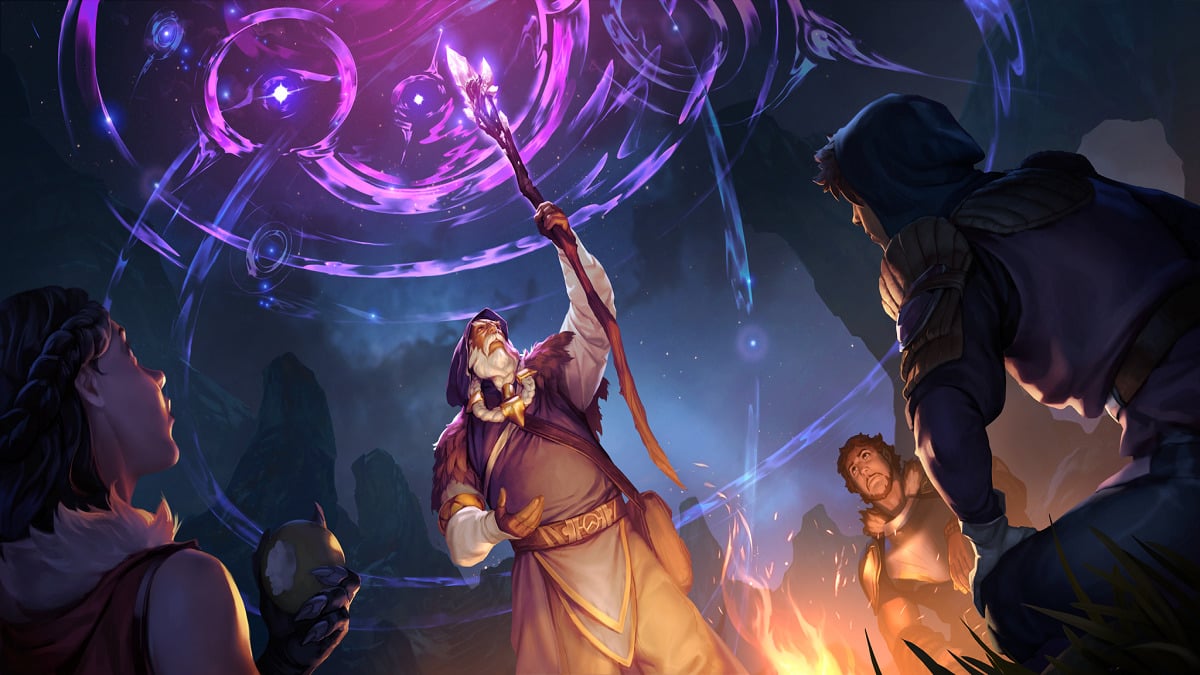 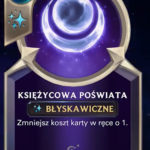 The reveal season for Legends of Runeterra’s second expansion, Call of the Mountain, has done an interesting twist leading up to the reveal for the penultimate champion that’s coming. In today’s Twitter reveal, Riot Games showed a new keyword, Invoke, that gives players the chance to pick an uncollectible Celestial card out of three choices.

To coincide with this release, Riot Games is giving multiple content creators the chance to reveal the Celestial cards that can be found from Invoke throughout the day.

Here are all of the Celestial cards that you can invoke (updated periodically throughout the day):

While the name is not confirmed, the translated effect is that it makes a unit in your hand cost one less.

The second Celestial card was revealed by Russian content creator TianKami on VK:

The name is a conjugated take on the word Snake. As a cheap Celestial Unit, with respectable stats comparable Fleetfeather Tracker, this snake will allow you to contest the board early, giving you the chance to buy more time for future invokes and other Celestial cards.

The third Celestial card revealed is called the Equinox.

It’s a one mana Slow spell that silences any follower. While it is a one mana silence which is a cheaper than Purify, it is also slow, so it cannot be used during combat like other Silences.

The fourth card revealed is The Charger.

As a one mana unit with 4/1 with Overwhelm, The Charger gives you a chance to catch up on tempo with it’s cheap body. Besides being an aggressive power house, it can also deter enemies from attacking due to its four power breakpoint.

The fifth card revealed is Moonglow.

While the two permanent health buff is nothing to write home about, the SpellShield buff cannot be ignored. By giving your big and important units SpellShield, your opponent will have to waste a ton of resources to clear your toughened up unit.

The sixth card revealed is The Messenger.

The Messenger a two mana unit with 2/2 in stats that draws you a card when summoned. Comparable to Avarosan Sentry, The Messenger serves as a midway point between maintaining card advantage, and a unit with fair stats that can contest the board.

The seventh Celestial Card shown off today is Crescent Strike.

The eight Celestial card revealed is The Trickster:

The Trickster combines a fair stat line and a potent keyword into one Celestial card. At 3/3 and Elusive, the Trickster is good at either threatening the opponent or stalling against enemy Elusive units. El Bromista is one of the better cards you can hope for from an early Spacey Sketcher.

The ninth Celestial card revealed is The Traveler.

The Traveler is a four mana 3/4 unit with a Play effect that lets you Invoke again. While its stats are nothing to write home about, the fact that it gives you another chance at a different Celestial can be potent if the other two options given at the time were not ideal cannot be underestimated.

The tenth Celestial card revealed is Written In Stars.

Comparable to Statikk Shock, Meteor Shower grants you targeted removal against two opposing threats. However, the damage distribution on Meteor Shower also gives you multiple opportunities to destroy both a medium sized threat, and a weaker threat.

The twelfth Celestial card revealed is The Warrior.

As a 5/5 unit for five mana with Challenger, The Warrior aims to clear multiple units on the board and get even with the opponent.

Its effect is a six mana Slow spell that Obliterates one enemy of your choice. Compared to Vengeance, which is one mana more expensive but faster, this unconditional removal will destroy an enemy without dealing with repurcussions from Last Breaths.

The fourteenth Celestial card revealed is the Golden Sister, who also spawns her Silver Sister. 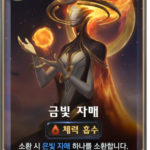 The Golden Sister is a six mana 4/3 unit with Lifesteal and whenever she is summoned, she also summons her Silver Sister which is a six mana 4/3 unit with Elusive. These siblings mark the beginning of how much stronger Celestials become at larger mana breakpoints. Effectively a six mana 8/6 split over two respectable bodies, the sister duo can help stabilize by granting you life and defending against units with Elusive.

Cosmic Inspiration’s translated effect is if you behold a Celestial unit, grant your units +2/+2 everywhere and refill your spell mana. If you’re able to cast this, Cosmic Inspiration is effectively a four mana +2/+2 permanent value engine, if your opponent cannot end you quickly after playing this, then you will eventually overrun them with this notable stat buff.

The sixteenth Celestial card revealed is The Destroyer.

While a seven mana 7/7 that boosts its power may seem excessive, the Overwhelm keyword alongside the new SpellShield mechanic makes The Destroyer a formidable finisher. If you have been playing multiple Celestial cards, this can oftentimes end the game for your opponent when you play it during the turn where you attack.

The seventeenth Celestial card revealed is Tomb of the Universe.

Tomb of the Universe’s translated ability has a Behold requirement to activate. Instead of requiring an eight mana card in hand or play like the Trundle-related cards do, you jsut need a Celestial card in play or in hand. Once you meet the requirement, Tomb of the Universe will Obliterate all units on the board with three power or less. Compared to all of the other removal presented from Celestial Cards, this one gives you the highest chance of clearing out wider enemy boards. It also serves as a powerful counter to champions with weak stats but strong abilities, like Anivia.

The eighteenth Celestial card revealed is The Immortal Fire.

Similar to Tomb of the Universe, Supernova requires a Celestial card to be in play or in hand to activate. But the ability to Obliterate two enemy units unconditionally is a ridiculously powerful two for one. Being able to bypass any Last Breath effects in the late game, like from Commander Ledros or Tryndamere will make your opponent recoil at the swing that this card can bring.

Living Legend’s translated effect fills your entire hand with Fleeting Celestial cards, it also refills your mana entirely. Living Legends serves as a last ditch effort if you’re unable to find specific Celestial cards you may be looking for. Due to its random nature, this should only be picked if you’re either low on cards, or desperate to find powerful units or specific answers like Supernova or Tomb of the Universe.

The twenty-first Celestial card revealed is The Scourge.

As the most expensive Celestial, The Scourge provides a potent game ending ability while it’s attacking. By giving the rest of your board +2/+2 and Overwhelm for the turn, your opponent is often times just straight up decimated by such a buffed board.

The final Celestial card revealed is The Great Beyond.

To use the power of these Celestial cards, you must use the new Invoke Keyword, here are all of the currently known Invoke cards that will grant you access: 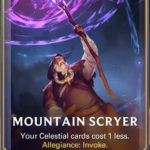 Make a claim for these Celestials when you Invoke as these cards are coming when LoR: Call of the Mountain officially releases for PC and Mobile on Aug. 26.