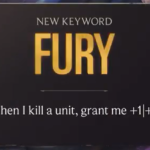 The reveal season for Legends of Runeterra’s second expansion, Call of the Mountain, has entered its final day.

Herald of Dragon is a frail unit with a potent mana-cheating ability. If she can survive for a turn, she can play your Dragon cards a turn sooner. With the way these Dragons work, if they can start wreaking havoc on weaker boards early on, they can eventually scale out of control with their Fury keyword. But due to her weak stats, Herald of Dragon will need multiple avenues of protection to not get picked off instantly after being played.

Whiteflame Protector is a simple run-of-the-mill Dragon. Due to the Fury keyword it has, opponents will be less likely to chump block it and will try to either overpower it in combat or remove it with spells.

Fused Firebrand circumvents this weakness. For just one more additional mana, it comes with the same keyword, +1/+1 in stats, and also Spellshield. Due to the Spellshield ability, trying to destroy it or weaken it with abilities will be futile as the first ability thrown at it will be nullified. This gives Fused Firebrand an easier time of scaling up before your opponent.

While both Whiteflame Protector and Fused Firebrand can be avoided in battle, to avoid the punishment of Fury’s scaling, Screeching Dragon has Challenger. This allows you to directly pull enemies into its destruction, giving you a guaranteed +1/+1 buff every turn that you attack. While Screeching Dragon doesn’t have the initial power or protection that Fused Firebrand has, the Challenger keyword gives you the ability to control the board effortlessly.

Dragon’s Clutch dual purpose makes it a flexible card. During combat or a push for lethal, you can buff your entire Dragon-based board with a permanent +1/+1 buff, granting it the power and toughness to either run over opposing units or destroy the enemy Nexus. In the late game, when you’re starved for cards in hand, Dragon’s Clutch can refuel your hand with powerful dragons. Additionally, safely assuming Aurelion Sol has the Dragon tag, this can also draw into Aurelion Sol specifically.

Ride these dragons into battle and rain fury from above when these cards and more join LoR: Call of the Mountain on Aug. 26.